Photo via Illinois Supreme Court.
Stephen Wolf
and
DailyKos
May 23, 2021

Five years ago, the Illinois Supreme Court ruled 4-3 along party lines to block a Republican-backed effort to place a redistricting initiative on the ballot that would have, counterintuitively, undermined the cause of fair representation in the Prairie State. But little-noticed elections taking place next year could hand Republicans a majority on the court for the first time in decades that would allow them to greenlight a similar effort. Such a move would open the door to distorted maps under the guise of promoting fairness—and could even allow Republicans to seize control of the legislature despite the state's deep blue lean.

Illinois is one of just a handful of states where Democrats will have full control over the redistricting process following the 2020 census, just as they did a decade earlier. However, thanks in large part to a decades-long history of racist redlining and white flight segregation in Chicago that has left voters of color heavily concentrated in urban areas, Democrats face a "geography penalty" that would leave them at a disadvantage even if the state utilized ostensibly nonpartisan maps.

There's no question that the districts Democrats drew 10 years ago were gerrymandered—lawmakers didn't try to hide their intent. But because of this geography bias, these gerrymanders did not in fact lock in a Democratic advantage in excess of the party's popular support.

Partisan gerrymandering is by no means the only way to counteract a geography penalty. An independent commission could, in particular, be instructed to consider the fairness of partisan outcomes when drawing new maps. But if Republicans take control of the Illinois Supreme Court, they could let conservative activists deploy a ballot initiative that omits such a requirement and even exacerbates the GOP's geography advantage by prioritizing "compact" districts.

Such an effort could even lock in minority rule in Illinois. Democrats, however, have the opportunity to prevent this scenario by reforming the way state Supreme Court justices are elected, ensuring greater fairness for both the court itself and, by extension, the redistricting process overall.

Illinois is one of just four states, along with Kentucky, Louisiana, and Mississippi, that elects Supreme Court justices by districts rather than statewide. Unlike with legislative districts, however, federal courts do not require judicial districts to have equal population—the thinking being that judges aren't representative officials.

That doesn't mean they're fair, though, particularly since Illinois' districts haven't been redrawn for over half a century. As a result, they've become so badly disproportional that the largest of the single-member districts, the 2nd, is home to more people than the two smallest—the 4th and 5th—combined, as shown in the map below (see here for a larger version). Unsurprisingly, this distortion has benefited more rural areas in the southern part of the state at the expense of voters in the Democratic-leaning Chicago suburbs. 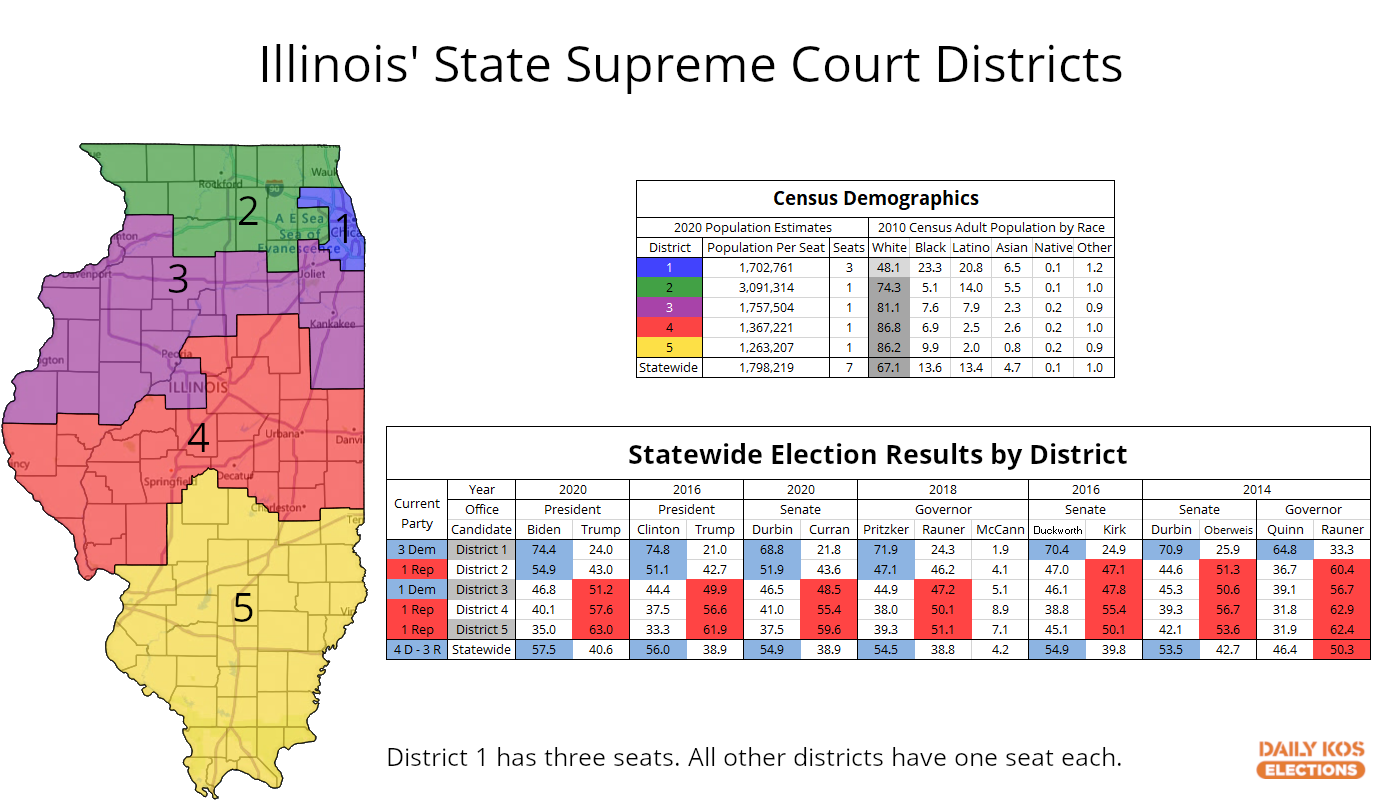 Thanks to this district-level distortion, Republicans could take control of the Supreme Court in next year's elections, even though Illinois is a solidly blue state that voted 57-40 for Joe Biden last year. Four seats on the court are up in 2022, and both the 2nd and 3rd Districts could host competitive elections. (Incumbent justices—one Democrat and one Republican—should be heavily favored in the 1st and 4th Districts, respectively.)

This means that if a recently appointed Republican justice holds his seat in the 2nd, and if the GOP can flip a Democratic open seat in the 3rd, they'll transform the court's current 4-3 Democratic majority into a 4-3 Republican advantage. And that advantage would last for a full decade, because justice serve 10-year terms, and the only other Republican isn't up for reelection until 2030 and holds a solidly red seat anyway.

Normally those elections are what's known as "retention" elections—that is, voters simply say whether they want to keep an incumbent in office, yea or nay. To keep their job, a judge must earn 60% of the vote, though that's always been a foregone conclusion.

That was, until last year, when Democratic Justice Thomas Kilbride in the conservative-leaning (and underpopulated) 3rd District failed to win the supermajority he needed to earn another term. That made Kilbride the first Supreme Court justice since retention elections were adopted in 1964 to lose such an election.

It also set up a traditional partisan election next year in his district, which voted for Donald Trump 51-47. Kilbride's replacement, Democratic Justice Robert Carter, isn't seeking a full term, creating an open seat that Republicans have a strong chance to pick up. Meanwhile, the neighboring 2nd District, which backed Joe Biden by 55-43, will also hold a partisan election because appointed Republican Justice Michael Burke is seeking his first full term. If next year resembles a traditional midterm that disfavors the party in control of the White House, Burke could win despite the district's lean.

Together, these two districts will determine who controls the court, and if Republicans take a majority, they could authorize the very sort of ballot initiative the court rejected in 2016—one that could penalize Democrats and voters of color based solely on where they live, due to a legacy of racism of which they're the victims.

Some top Republicans appear to already be taking notice of how high the stakes are. Politico recently reported that GOP Rep. Darin LaHood could be interested in running for the critical 3rd District next year, which would given his party a much more prominent candidate than judicial races typically attract. (In an ironic twist, Democrats themselves could wind up giving LaHood more motivation to run if they try to make his congressional district bluer or combine him with another Republican.)

Should Republicans get their way and succeed in revamping the redistricting process, it's easy to illustrate just how damaging districts that prioritize compactness and other nonpartisan criteria while ignoring fairness could be. The map below (see here for a larger version) is a hypothetical example of just such an approach. 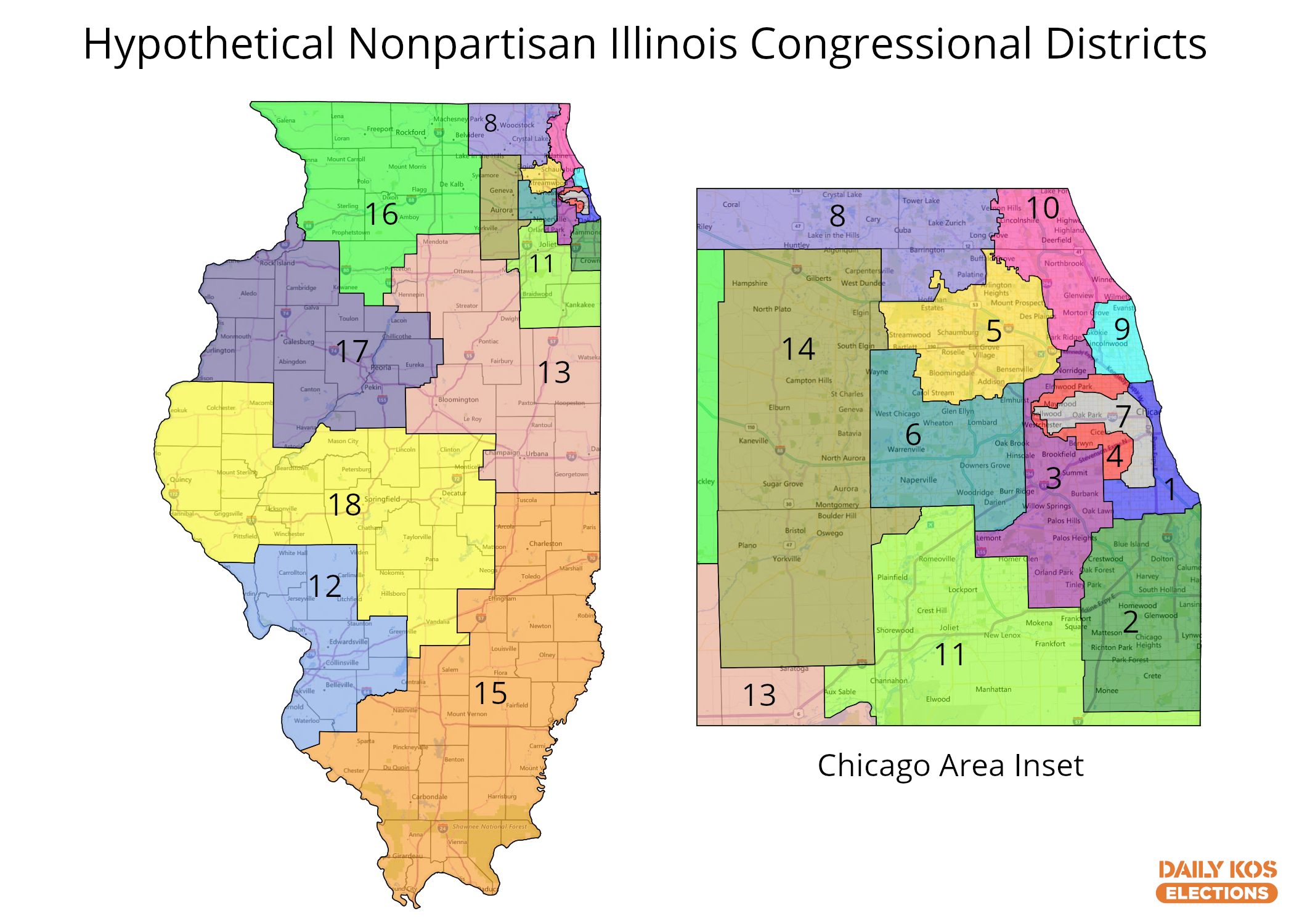 While these seemingly "clean" lines might look pleasing to the naked eye, the patterns they hold are troubling. Daily Kos Elections has calculated key demographic and election result statistics for these districts, which show that during the prior decade, no fewer than four different Democratic candidates for statewide office won their races but lost a majority of districts under this map—an outcome directly at odds with the fundamental notion in a two-party system that the party that wins the most votes should also win the most seats.

Sen. Dick Durbin's successful reelection in 2014 best showcases this distortion: Despite his wide 54-43 margin, he would have carried only eight districts while his Republican opponent would have won 10. In fact, Durbin would have lost the median district in this scenario 50-46, putting it almost 15 points to the right of his statewide win.

With a headwind like that, Democratic candidates for the House would have been hard-pressed, and Republicans could have wound up controlling a majority of the delegation. The same thing would be eminently possible under a future map like this one (albeit with 17 districts, since Illinois is losing one seat due to reapportionment), and not just for Congress but for the legislature as well.

But Democratic lawmakers can go a long way toward ensuring fairer congressional and legislative maps if they simply redraw the long-neglected judicial map—something they are entirely empowered to do. And there's no need to gerrymander the lines: A nonpartisan approach that simply equalizes populations across districts would improve matters greatly.

The map below (see here for a larger version) features one such proposal. It converts the 3rd District from a hodgepodge of disparate communities that sprawls across the state into a more cohesive district concentrated in the Chicago suburbs. Not only would its population be far closer to the ideal, this revised district would have favored Biden by a 54-44 margin rather than backing Trump. 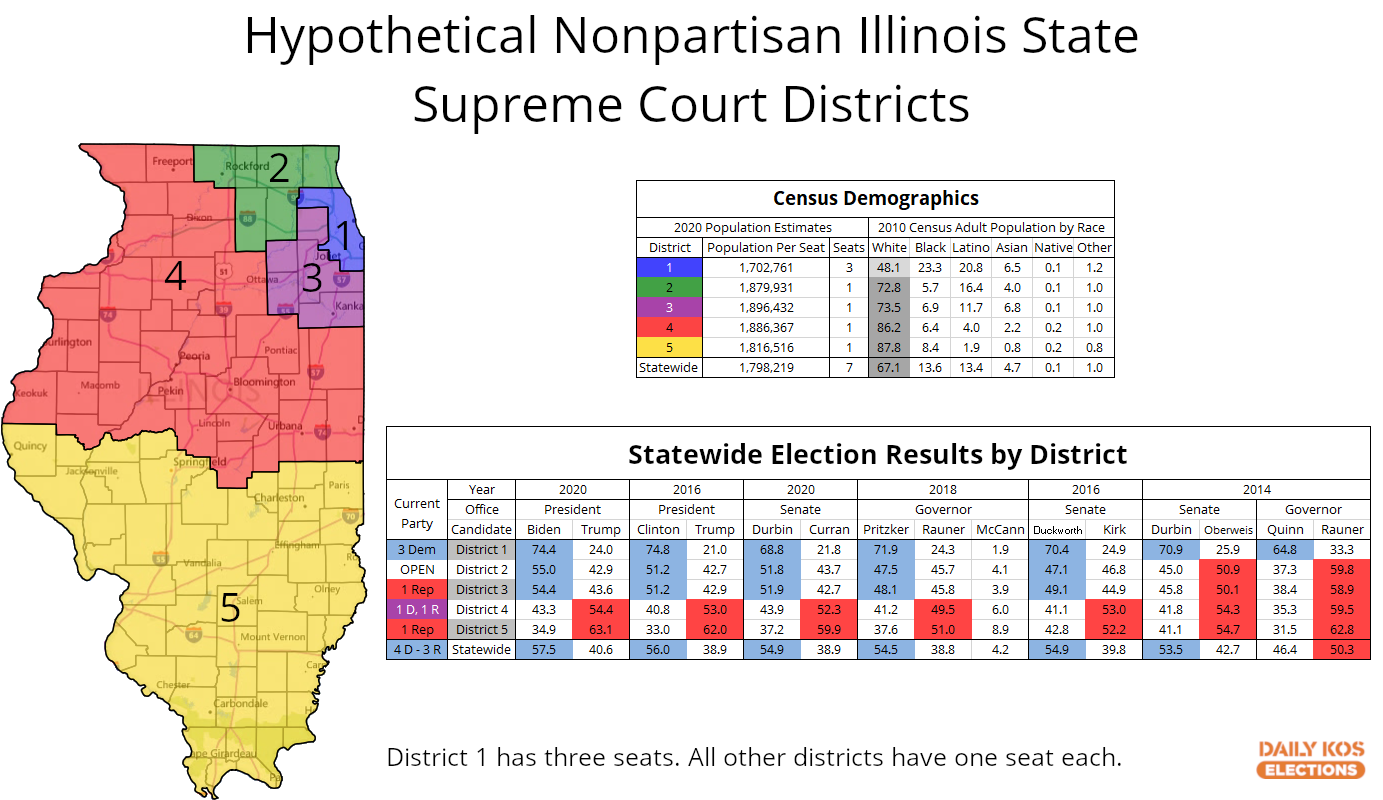 This new 3rd District would reduce the chance that Republicans could gain a majority on the bench, but even this map would still give the GOP a large advantage when looking at the median seat—just not as gargantuan as under the current disproportional map. For instance, in the 2014 Senate election, which Democrat Dick Durbin won 53-43, Republicans would nonetheless have won a majority of Supreme Court seats.

Consequently, more extensive long-term solutions are needed that go beyond merely redrawing these court districts. The wisest move would be to end judicial elections entirely in favor of a more merit-based appointment method like those that other states have created to insulate judges from the pressures of partisan politics. That, however, would require a constitutional amendment that involves a three-fifths vote in both legislative chambers followed by a statewide referendum, whereas simply redrawing the districts to equalize their populations would go through the ordinary legislative process.

By the same token, Illinois Democrats could also put in place an independent redistricting commission with a mandate to produce congressional and legislative maps that ensure fair outcomes from a partisan perspective, short-circuiting any conservative attempt to pass a reform-in-name-only at the ballot box. The political hurdles to implement such an overhaul would be immense, however. Drafting a new judicial map would be far easier—but the window to do so won't remain open for long.