‘Unscrupulous’ and happy to promote Trump's lies, Elise Stefanik is a ‘perfect choice’ for ‘what the GOP has become’ 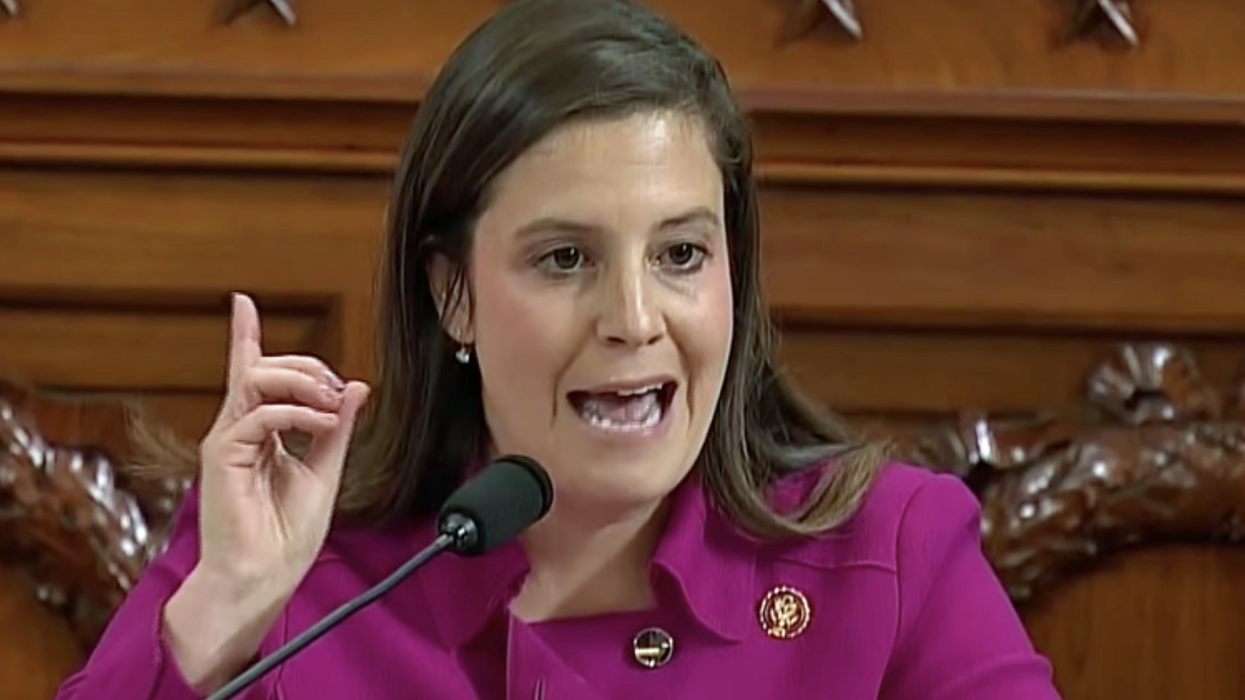 Rep. Elise Stefanik (screengrab)
How embracing Trumpism and the far right won NY's Elise Stefanik a fourth term — even as the president lost
Alex Henderson
May 10, 2021

When Republican Rep. Elise Stefanik of Upstate New York was first elected to the U.S. House of Representatives in 2014, she was more of a traditional conservative. But Stefanik, who will likely replace Rep. Liz Cheney of Wyoming as House Republican Conference chair, has since moved to the far right and become a full-fledged Trumpista — and Never Trump conservative Charlie Sykes is vehemently critical of her in a May 10 column for the Bulwark.

Cheney, the arch-conservative daughter of former Vice President Dick Cheney, has infuriated Trumpistas by acknowledging that President Joe Biden won the 2020 election fair and square and calling out Trump's debunked voter fraud claims as total nonsense. For that reason, Trump's sycophants want her removed from her position as House Republican Conference chair. Stefanik is being pushed by House Minority Whip Steve Scalise, who obviously appreciates her devotion to Trump.

Sykes, however, views Stefanik as a shameless opportunist. And he sees House Minority Leader Kevin McCarthy as spineless for going along with the ousting of Cheney.

In his column, Sykes notes the influence of Brian Jack, former President Donald Trump's ex-White House political director, on McCarthy. Jack, Sykes points out, helped set up Trump's Stop the Steal Rally of January 6 — and in March, McCarthy hired him for his political operation.

"On Sunday," Sykes writes, "McCarthy made it official; he's all-in on the anti-Cheney coup — and supporting Trump loyalist Elise Stefanik to take her spot."

Sykes notes how badly Stefanik has flip-flopped. In 2015 and 2016, the Never Trumper notes, Stefanik was often critical of Trump; now, she's MAGA all the way. And Stefanik, Sykes points out, debased herself by promoting Trump's false claims of widespread voter fraud in the 2020 election.

"The key to Stefanik's rise is not just her willingness to embrace Trumpism in full — it is the way she has grasped onto the Big Lie as a slingshot for her ambitions," Sykes writes. "As CNN's Daniel Dale notes, she has 'parroted conspiracy theories about 'irregularities,' then mentioned she had 'concerns' about 'Dominion software,' indirectly alluding to a false conspiracy theory that the voting-machine company had been part of an effort to rig the election against Trump.' She signed onto the friend-of-the-court brief supporting Texas' bid to get the Supreme Court to overturn the election results and — even after the January 6 riot — voted against certifying the election results for President Biden."

Elise Stefanik had a chance to avoid Four Pinocchios. All she had to do was admit she was wrong. instead she double… https://t.co/LbkshHbQ2T
— Glenn Kessler (@Glenn Kessler)1620397459.0

Sykes adds, "In other words, Stefanik has not merely accepted Trump's election lie, she has amplified it…. Her rise is propelled by the unscrupulousness of her ambition and the malleability of her principles. She is the perfect choice for what the GOP has become."