Since the dawn of the electronic age, it has never been easier for researchers to engage with the general public — gaining access to precious resources otherwise unavailable.

This is illustrated perfectly in our latest publication, in which we introduce a previously unknown letter written in 1949 by none other than Albert Einstein. In it, the German-born mathematician and physicist discusses bees, birds and whether new physics principles could come from studying animal senses.

We first came across it in 2019, after Judith Davys — a retiree living in the United Kingdom — read an article we'd published on the mathematical abilities of bees. She reached out to us to share the 72-year-old letter, which Einstein had addressed to her late husband Glyn Davys. We spent a year investigating the precious document. 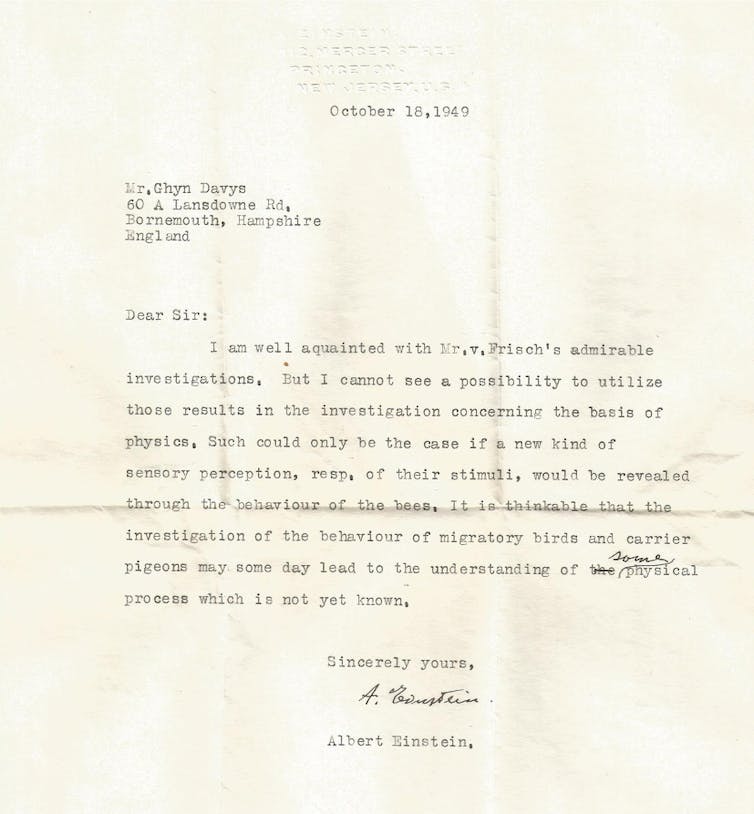 Einstein was one of the greatest thinkers of the twentieth century, as well as an excellent communicator. His imagination helped shape many technologies that define the information age today. For example, Einstein's theory of general relativity governs the large-scale structure of the universe, which in turn enables corrections for the GPS system used on our smartphones.

In 1921, Einstein was awarded a Nobel Prize for his study of the “photoelectric effect". This effect describes how light can remove electrons from atoms — a principle that underpins the operation of today's solar cells.

In 1933, Einstein left Germany to work at Princeton University in the United States. It was here, in April 1949, he met scientist Karl von Frisch at a lecture.

Von Frisch was visiting Princeton to present his new research on how honeybees navigate more effectively using the polarisation patterns of light scattered from the sky. He used this information to help translate bees' now famous dance language, for which he eventually received his own Nobel Prize.

The day after Einstein attended von Frisch's lecture the two researchers shared a private meeting. Although this meeting wasn't formally documented, the recently discovered letter from Einstein provides some insight into what may have been discussed.

Animal behaviour from a physicist's lens

We suspect Einstein's letter is a response to a query he received from Glyn Davys. In 1942, as WWII raged, Davys had joined the British Royal Navy. He trained as an engineer and researched topics including the budding use of radar to detect ships and aircraft. This nascent technology was kept top secret at the time.

By complete coincidence, bio-Sonar sensing had been discovered in bats at the same time, alerting people to the idea that animals may have different senses from humans. While any previous correspondence from Davys to Einstein appears lost, we were interested in what may have prompted him to write to the famous physicist.

So we set out to trawl through online archives of news published in England in 1949. From our search we found von Frisch's findings of bee navigation were already big news by July of that year, and he had even been covered in The Guardian newspaper in London.

The news specifically discussed how bees use polarised light to navigate. As such, we think this is what spurred Davys to write to Einstein. It is also likely Davys's initial letter to Einstein specifically mentioned bees and von Frisch, as Einstein responded: “I am well acquainted with Mr. v. Frisch's admirable investigations".

In his letter to Davys, Einstein also suggests that for bees to extend our knowledge of physics, new types of behaviour would need to be observed. Remarkably, it is clear through his writing that Einstein envisaged new discoveries could come from studying animals' behaviours.

It is thinkable that the investigation of the behaviour of migratory birds and carrier pigeons may someday lead to the understanding of some physical process which is not yet known.

Now, more than 70 years since Einstein sent his letter, research is indeed revealing the secrets of how migratory birds navigate while flying thousands of kilometres to arrive at a precise destination.

In 2008, research on thrushes fitted with radio transmitters showed, for the first time, that these birds use a form of magnetic compass as their primary orientation guide during flight.

One theory for the origin of magnetic sense in birds is the use of quantum randomness and entanglement. Both of these physics concepts were first proposed by Einstein. But although Einstein was one of the founders of quantum physics, he was uncomfortable with its implications.

“God does not play with dice", he famously stated, to express his opposition to the randomness which lay at the heart of quantum mechanics.

In an influential 1935 paper, Einstein and co-authors Boris Podolsky and Nathan Rosen introduced the concept of quantum entanglement. Interestingly, it was introduced as a conceptual failure of quantum mechanics, rather than one of its defining centre pieces, as we now understand it.

Perhaps ironically, one of the leading theories for the origin of magnetic sense in birds is the use of quantum randomness and entanglement. This theory suggests radical-pair chemical reactions in cryptochromes — signalling proteins found in certain plants and animals — are affected by the Earth's magnetic field, and thus form the basis of a bird's biological magnetic compass.

Although Einstein disagreed with entanglement, his willingness to speculate on how we might learn new things from animal sensory perception suggests he would have been delighted by how new research on bird migration is pushing the boundaries of our understanding of physics.

Indeed, Einstein's letter to Davys is testament to how open he was to new possibilities for the field of physics being observed in nature. It illustrates, once again, how mindful he was of what one might discover when taking a different view of the world.

Imagine you've forgotten once again the difference between a gorilla and a chimpanzee, so you do a quick Google image search of “gorilla." But instead of finding images of adorable animals, photos of a Black couple pop up.

Is this just a glitch in the algorithm? Or, is Google an ad company, not an information company, that's replicating the discrimination of the world it operates in? How can this discrimination be addressed and who is accountable for it?

“These platforms are encoded with racism," says UCLA professor and best-selling author of Algorithms of Oppression, Dr. Safiya Noble. “The logic is racist and sexist because it would allow for these kinds of false, misleading, kinds of results to come to the fore…There are unfortunately thousands of examples now of harm that comes from algorithmic discrimination."

On At Liberty this week, Dr. Noble joined us to discuss what she calls “algorithmic oppression," and what needs to be done to end this kind of bias and dismantle systemic racism in software, predictive analytics, search platforms, surveillance systems, and other technologies.

At Liberty · Google This: Algorithmic Oppression
What you can do:
Take the pledge: Systemic Equality Agenda
Sign up

The core problem with American democracy has deep historical roots

G7 judged a 'colossal failure' on climate and COVID-19 emergencies