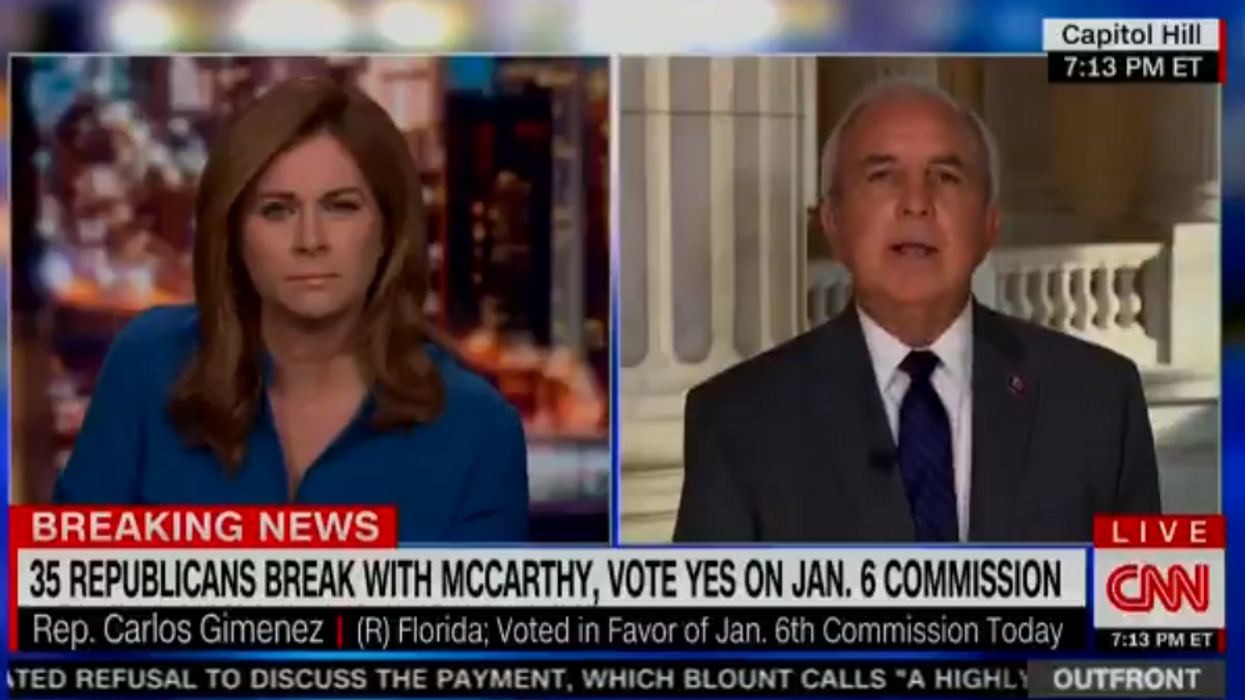 A Republican congressman is at the center of controversy for his latest remarks suggesting he was aware of planning for the events at the U.S. Capitol on Jan. 6.

During an appearance on CNN, Rep. Carlos Gimenez (R-Fla.) explained why he did not vote in favor of former President Donald Trump's impeachment following the insurrection on the U.S. Capitol. But as he offered his explanation, he also said something else that caught the attention of viewers and flagged by Vox reporter Aaron Rupar.

Gimenez admitted that he did not believe Trump incited the insurrection saying, "I didn't think [Trump] incited the events that happened."

However, he also revealed people inside his hotel room were discussing plans to "do something" at the federal building which suggests he may been aware of what was to come. He added, "I know for a fact that I saw people in my hotel room that were saying they were gonna do something at 2 o'clock, and that happened at 9 o'clock in the morning."

But the comment led to tons of questions from Twitter users in response to the video. Many wondered if Gimenez alerted authorities prior to the insurrection since he was in the presence of people discussing plans for later that day. One user wrote, "So, did Carlos Gimenez report these insurrectionists to the Capitol Police or other authorities that morning?"

@atrupar @jeffpearlman So, did Carlos Gimenez report these insurrectionists to the Capitol Police or other authorit… https://t.co/0SYvJ39mDP
— Norman Ornstein (@Norman Ornstein) 1621539773.0

Another user also noted Gimenez's remarks about the people in his hotel room. That person wrote, "Gimenez said: 'I saw people in my hotel ROOM that were saying they were gonna do something at 2 o'clock…' What were these people doing in his hotel room?"

@NormOrnstein @atrupar @jeffpearlman Gimenez said: “I saw people in my hotel ROOM that were saying they were gonna… https://t.co/vLa6k8c02W
— Roland Kausen (@Roland Kausen) 1621540561.0

Based on Gimenez's remarks, some users think he should be interviewed to determine whether or not he may have had prior knowledge about the insurrection. "Did Rep. Gimenez notify the Capitol Police, the FBI, the Secret Service - anyone in a position to defend the Capitol?" one Twitter user asked, adding, "I think Rep. Gimenez needs to be interviewed by the FBI."

@atrupar Did Rep. Gimenez notify the Capitol Police, the FBI, the Secret Service - anyone in a position to defend t… https://t.co/rzEafj8rHA
— Cathy Coleman (@Cathy Coleman) 1621536631.0

@atrupar Assuming he was completely clueless about it, as he would have us believe... after an actual insurrection… https://t.co/eyZCQ0FCh4
— ClearingTheFog (@ClearingTheFog) 1621591729.0