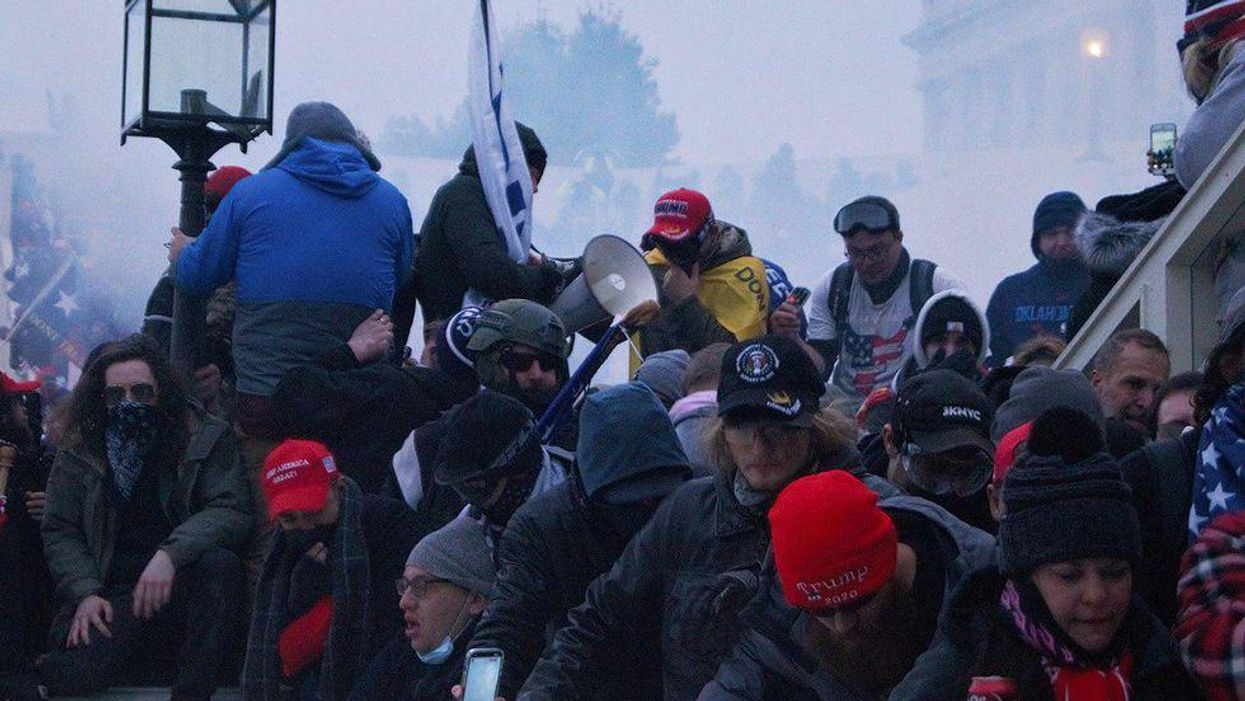 Donald Trump supporters outside the U.S. Capitol Building on January 6, 2021, Tyler Merble
The Conversation
May 20, 2021

In the coming weeks, trials will begin for more than 400 people accused of attacking the United States Capitol.

Was the siege chaotic, impromptu and disorganized, or was it the work of a well-planned force of far-right militias, as mounting evidence suggests? Can an attack be both chaotic and planned?

We study insurgencies, and not only is it possible, but it's very common. Drawing on our research, here are four insights into the events of Jan. 6 and the future of far-right violence in the U.S.

1. Coordination only requires a date

After the presidential election, thousands of “Stop the Steal" groups formed online. They organized hundreds of small-scale protests and militia actions in Michigan, Oregon, Texas and Arizona. They then reached the crucial moment in any movement — how do you unite hundreds of uncoordinated people into one cohesive action?

An innovative solution emerged in the Arab Spring of 2011 — find someone respected by potential protesters and insurgents to fix a date for action: Tunisia (Jan. 14), Egypt (Jan. 25), Libya (Feb. 17) and Syria (April 29).

Defeated president Donald Trump played this role after he lost the election, calling for a protest on Jan. 6 in Washington. Establishing that date allowed protesters and potential insurrectionists to coordinate without direct communication. Calling for a protest allowed those with violent intentions to plan in plain sight and avoid drawing the attention of authorities.

Insurgents' first attacks are especially risky. Armed action immediately draws the state's attention, and most groups are too fragile to survive. A more common insurgent strategy is to launch attacks alongside mass protests. It allows the attackers to wait in the open until they see an opportunity.

The protests also give insurgents an advantage: state forces are distracted and overwhelmed by unarmed protesters. The chaos of large protests also tricks observers into concluding the attack was not pre-planned, reducing the impulse to find those responsible.

On Jan. 6, there is substantial evidence that far-right and white supremacist groups incited protesters at critical moments to breach police lines.

The Oath Keepers deployed “30 to 40 members" to Washington and coordinated closely while in the crowd through Zello, a walk-talkie style phone app. A similar group, the Proud Boys, did not even attend the rally, choosing to wait at the Capitol for the protesters to arrive before taking any action.

3. Legitimacy is all that matters

Insurgencies' chances of survival increase with popular support. Societies usually reject political violence as too extreme, ostracizing those responsible and reporting them to authorities. However, if enough people and prominent political leaders back a group's cause, they become harder to defeat.

There are two main reasons for this. First, individuals and communities provide financial and political support, the lifeblood of any uprising. And second, popular support and legitimacy makes recruiting easy.

Twenty years of counter-insurgency efforts in Afghanistan demonstrated that military superiority cannot overcome an insurgency when it's seen as legitimate by local communities. In the U.S., the majority of Republicans continue to believe that the election was stolen, a lie that was the primary motive for the Capitol attack.

Trump's firm grip on the Republican party and the potential for him to escalate his rhetoric in advance of the mid-term congressional elections in 2022 and the 2024 presidential election means he could fuel more organized forms of violence.

The Iraqi insurgency against U.S. troops from 2003-2011 provides the most worrying lesson of all. After the total defeat of the Iraqi military in only a matter of days, hundreds of tiny insurgent groups, including private militias, quickly learned how to avoid American surveillance and use roadside bombs to devastating effect against the U.S. military.

Most of the Jan. 6 attackers were inept, leaving a trail of incriminating evidence. Insurgents rarely make the same mistakes twice, in part because ineffective insurgents are arrested or killed. Mass arrests might be a comfort for those horrified by the events on Jan. 6, but it also creates a “natural selection" effect.

The more careful and adaptive groups survive and teach others their tactics, ensuring those that remain are more effective because they're harder to detect and more cautious. This same logic applies to de-platforming movement members online: the next iteration of alt-right social media accounts will be more adept at evading bans.

So what does this mean for the U.S. in the months and years ahead?

Most insurgencies are defeated quickly. Those that survive have consistent funding and support from prominent leaders and sympathetic communities.

This serves as a cautionary lesson: the militia groups behind the Capitol attack seemed to have raised substantial funds. These groups continue to receive political support from Republican party members and online communities, despite attempts to remove them from various social media platforms.

Crucially, research shows that cracking down on political movements often pushes its members into the arms of violent extremists. Evidence suggests the conditions are ripe for far-right extremist networks to persist, posing a serious threat over the next decade.

There are lessons to be learned in how political violence has been organized in other areas of the world that can help us anticipate the future of right-wing extremism.