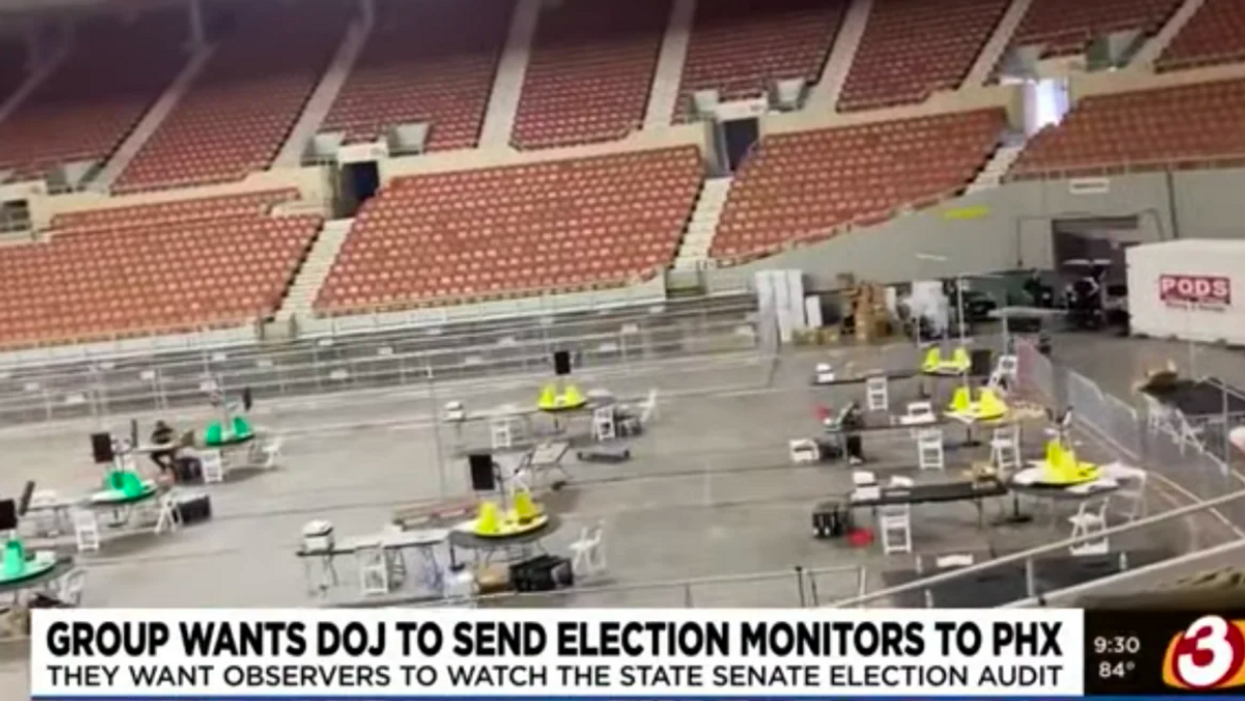 Image via Screengrab.
Ray Hartmann
and
Raw Story
May 31, 2021

The conservative Washington Times, a noted purveyor of conspiracy theories, didn't mince words in criticizing the spectacle of a partisan election "audit' -- to placate Donald Trump -- in Maricopa County, AZ.

"'Hoping something sticks': Arizona election audit promises more intrigue than answers," read the headline on a Saturday piece at the newspaper's website.

"The ongoing audit of the 2020 election in Arizona has the state's Republican leaders at each other's throats and their disputes over the process are raising doubts about the outcome of the high-tech recount," the paper reported.

The Times was not alone among leading conservative information sites in shying away from Trump's obsession. The Arizona audit has received scant coverage at FoxNews.com and Newsmax.com -- likely because Arizona Republicans are allowing the even-battier OANN to livestream the festivities -- and other right-wing sources have also seemed unimpressed.

"The Madness of the Maricopa Election Audit," blared a headline Friday at the National Review. "The election results in Arizona's largest county have been certified and authenticated multiple times. This audit effort has been pure folly."

Even the agitators at Breitbart.com have been circumspect, eschewing their customary red-meat screeching and picking up AP News stories on the audit instead. Imagine the confusion among Breitbart believers upon seeing the audit described like this last week:

The Washington Times analysis did not read like one would expect from a newspaper known for birtherism, climate denial and most recently, wondering aloud if Antifa hadn't pulled off the January 6 Capitol riot in disguise.

"The pro-Trump faction that is championing the effort says all they want is the truth about an election in which President Biden was declared the winner by a less than 1% margin and GOP challenges over irregularities were rejected by the courts," the newspaper reported.

"Republican officials in Maricopa County, which is Arizona's largest county and the target of the audit, say the auditors have made impossible demands. Some analysts suspect the audit is less about getting answers and more about injecting new uncertainty."

The National Review piece -- one of three critical of the audit in recent weeks, with none in support -- was authored by Maricopa County Recorder Stephen Richer, a Republican elected to that post in November. The article was carried until the "Elections" tab and not identified as a guest column.

Richer offer the conservative audience an analogy to an IRS audit of an American who does not cheat or lie on taxes:

"Even though an IRS audit might annoy you and cause you some stress, you'd eventually realize that you have nothing to fear as long as the audit is done fairly and properly.

"But you'd likely feel differently if the IRS outsourced the audit to someone who:

"That is what is happening to elections in Maricopa County, Ariz. — the home of almost two-thirds of Arizona's voting population."

Richer went on to defend the accuracy of the county's 2020 vote tabulation and he described the head of the company conducting the audit -- Cyber Ninjas CEO Doug Logan -- as having "indulged the wildest election conspiracy theories, including the one that deceased Venezuelan dictator Hugo Chavez somehow had a hand in rigging America's elections."

For its part, the Washington Times piece did present some whataboutism about then-Democratic president candidate John Kerry having challenged voting-machine accuracy in Ohio during the 2004 election. And it presented some Trump quotes, but in the context of questions that "have given Trump room to operate."

And the most telltale sign of how skeptically the conservative media view the Arizona circus is how the Times ended its analysis. It quoted Matt Bernhard, a research engineer at VotingWorks, a non-partisan, non-profit voting technology company:

"Mr. Bernhard said the problem is from what he's seen, the auditors in Arizona are in over their head and 'based on their lack of expertise, aren't capable of finding problems if they are there.

"'It is sort of the dog chasing a firetruck situation," he said. 'The dog is never going to catch the fire truck and even if he did he wouldn't know what to do with it.'"