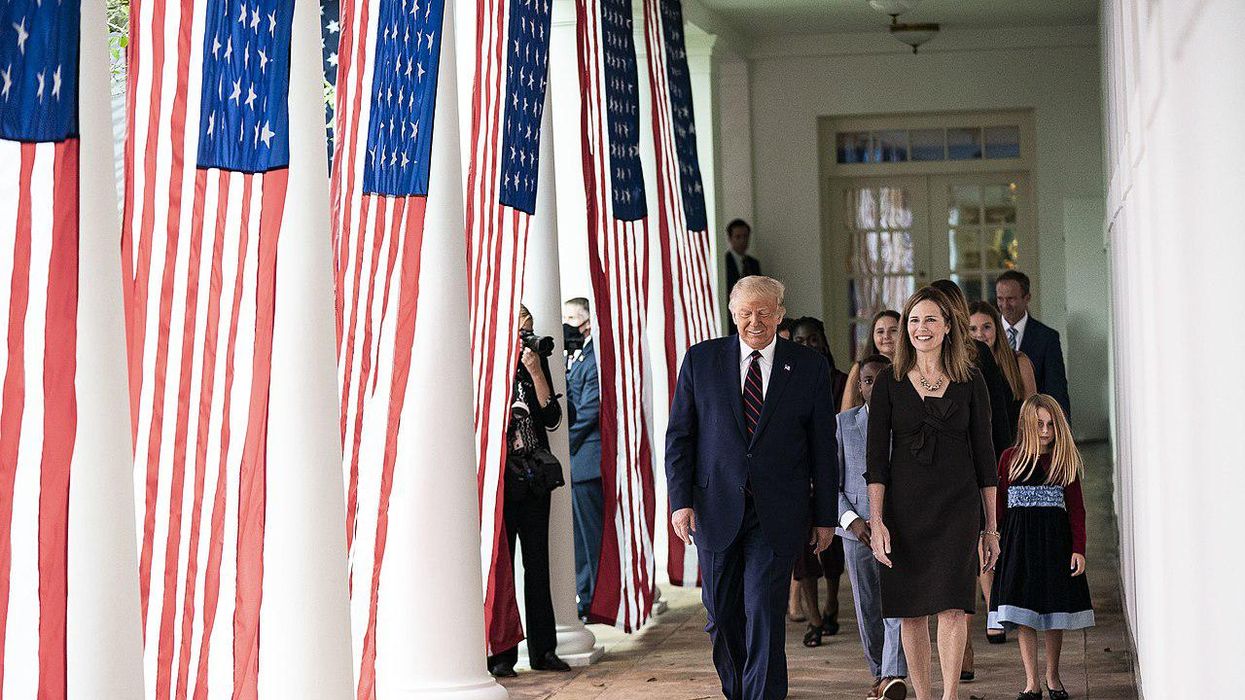 Although Donald Trump went down in history as a one-term president when he was voted out of office in 2020, he accomplished something that the United States' last two one-term presidents—Democrat Jimmy Carter and Republican George H.W. Bush — didn't: Trump appointed three justices to the U.S. Supreme Court. Justice Neil Gorsuch in 2017, Justice Brett Kavanaugh in 2018 and Justice Amy Coney Barrett in 2020 were all Trump nominees. In an article published by CNN's website on May 5, legal analyst Joan Biskupic lays out some reasons why Barrett has been more of a game-changer on the High Court than Kavanaugh.

Kavanaugh was a game-changer in that he replaced a libertarian: former Justice Anthony Kennedy, who retired in 2018. Appointed by President Ronald Reagan in 1987, Kennedy was a right-wing libertarian who was fiscally conservative but socially liberal and often sided with the late Justice Ruth Bader Ginsburg over far-right social conservatives such as Justice Clarence Thomas and the late Justice Antonin Scalia when it came to abortion or gay rights. And Trump replaced a libertarian with a social conservative.

But the change from Ginsburg to Barrett was more dramatic, as Trump replaced Ginsburg — the High Court's most famous liberal — with a severe social conservative who is even more to the right than Kavanaugh. Barrett is very much in the Scalia/Thomas vein.

Yet Barrett, as Biskupic explains in her article, is more low-key in her demeanor than Scalia.

Biskupic explains, "Supreme Court Justice Amy Coney Barrett has aligned most often with Clarence Thomas and Neil Gorsuch in her first months on the bench…. As she has adopted the legal method of her mentor, the late Justice Antonin Scalia, Barrett has avoided the flamethrower rhetoric that defined him and some followers on the bench today. Of the cases heard in oral arguments and resolved already this term, she has voted 100% of the time with Thomas and Gorsuch."

Comparing Kavanaugh and Barrett, Biskupic observes, "Barrett's pattern so far contrasts with that of Justice Brett Kavanaugh, who in the conservative bloc, has sided mainly with Roberts on the center-right. Differences between the newest appointees of former President Donald Trump could play out in major cases to be decided in the next two months over the Affordable Care Act, voting rights, and religious liberties when tested against LGBTQ interests, as well as next session in a 2nd Amendment gun rights case already on the calendar. The justices are also considering an abortion rights case for the 2021-22 term that would further illuminate Barrett's brand of conservatism."

Chief Justice John Roberts, appointed by President George W. Bush, has been right-wing in his judicial philosophy but more nuanced than Thomas or Scalia. And Biskupic notes that when Kavanaugh and Barrett are compared, Kavanaugh has been more likely to agree with Roberts.

"Kavanaugh has sidled since his 2018 appointment toward Roberts," Biskupic observes. "The chief and Kavanaugh have shared among the highest voting alignments for the past three years, according to statistics compiled by SCOTUSblog. Yet patterns of statistical togetherness go only so far. In several important cases when Roberts joined the liberal side, Kavanaugh remained with the right wing…. Barrett has voted so far in only a dozen cases that have been argued. That's where she has consistently been with Thomas and Gorsuch."