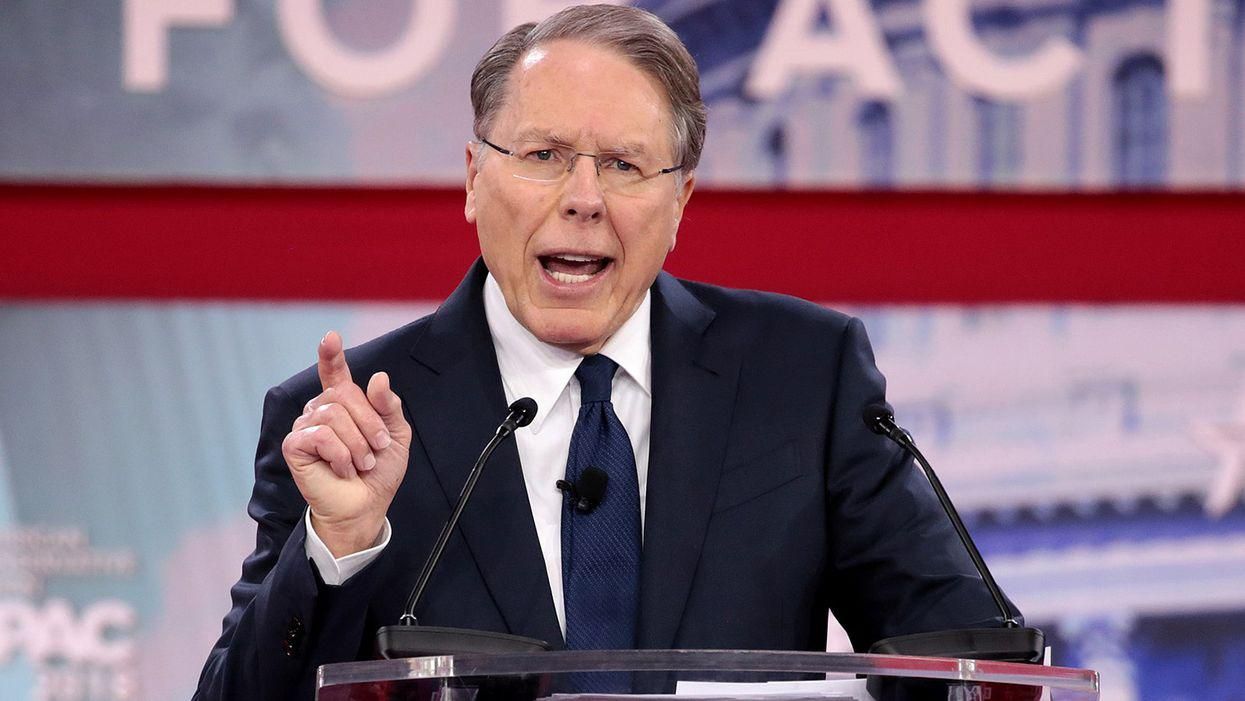 For 40 years Wayne LaPierre has been the executive vice president and CEO of the National Rifle Association, and yet can't seem to shoot straight.

A just-published article at The New Yorker exposes the top gun lobby group's chief as having "clumsy marksmanship," as a video of him on safari with his wife (below) reveals.

"After the mass shooting at Sandy Hook Elementary School, in 2012, Wayne LaPierre, the head of the National Rifle Association, told Americans agitating for new gun regulations, 'The only thing that stops a bad guy with a gun is a good guy with a gun.' Less than a year later, LaPierre and his wife, Susan, travelled to Botswana's Okavango Delta, where they hoped to show N.R.A. members that they had the grit to take on a different adversary: African bush elephants, the largest land mammals on Earth. The trip was filmed by a crew from 'Under Wild Skies,' an N.R.A.-sponsored television series that was meant to boost the organization's profile among hunters—a key element of its donor base. But the program never aired," The New Yorker's Mike Spies writes.

"The Trace and The New Yorker obtained a copy of the footage, which has been hidden from public view for eight years. It shows that when guides tracked down an elephant for LaPierre, the N.R.A. chief proved to be a poor marksman. After LaPierre's first shot wounded the elephant, guides brought him a short distance from the animal, which was lying on its side, immobilized. Firing from point-blank range, LaPierre shot the animal three times in the wrong place. Finally, a guide had the host of 'Under Wild Skies' fire the shot that killed the elephant. Later that day, Susan LaPierre showed herself to be a better shot than her husband. After guides tracked down an elephant for her, Susan killed it, cut off its tail, and held it in the air. 'Victory!' she shouted, laughing. 'That's my elephant tail. Way cool.'"

"Because they are cowards, Wayne and Susan LaPierre had parts from the two elephants they killed shipped to the United States under a taxidermists name instead of theirs," He writes in one tweet. "The elephants front feet were turned into stools for the LaPierre's home."

The details of the killing of the elephant are brutal, clearly the animal must have suffered greatly.

"After a guide spots an elephant standing behind a tree, LaPierre takes aim with a rifle. As LaPierre peers through the weapon's scope, the guide repeatedly tells him to wait before firing. LaPierre is wearing earplugs, doesn't hear the instructions, and pulls the trigger. The elephant drops. 'Did we get him?' LaPierre asks."

The guide at first says yes, but then, as he approaches the elephant, it appears that the animal is still breathing. The guide brings LaPierre within a few strides of the elephant, which lays motionless on the ground. He tells LaPierre that another bullet is needed.
After wounding the animal, he again "shoots the elephant in the wrong place. It's still alive. The guide tells LaPierre to sit down and reminds him to reload, as he physically moves LaPierre into place. Now on one knee, the N.R.A. leader asks, 'Same spot?' and then shoots again. The bullet misses the mark."
"I don't think it's quite done yet," the guide says to Makris. "Do you want to do it for him?" The guide then says to LaPierre, "I'm not sure where you're shooting."
"Where are you telling me to shoot?" LaPierre responds, sounding frustrated. The guide again walks over to the elephant and points toward the ear. "Oh, O.K.," LaPierre says. "Alright, I can shoot there." He takes a third shot at point-blank range.
"Uh-uh," the guide says, indicating that LaPierre has missed his mark again.
"No?" LaPierre asks.

Elephants are considered to be very intelligent, self-aware, and show empathy. Scientific American in 2014 reported they are "some of the most intelligent, social and empathic animals around."

Read the entire report at The New Yorker.