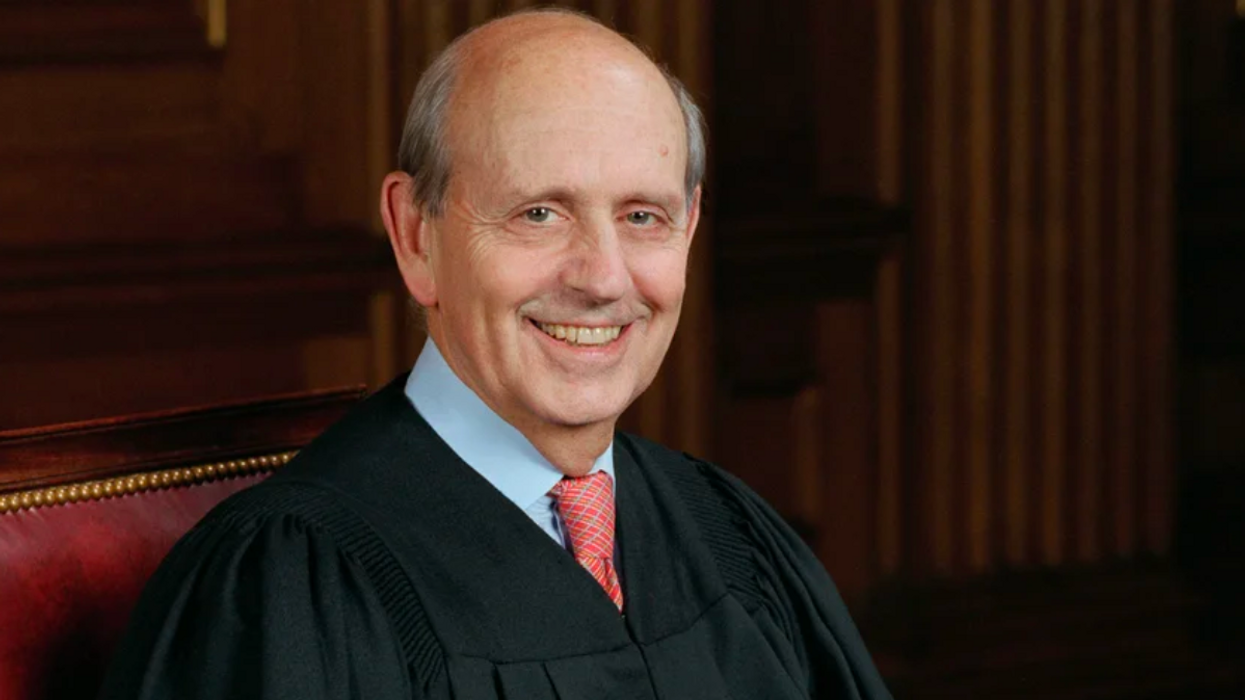 A left-leaning advocacy group on Friday joined the growing chorus of calls for U.S. Supreme Court Associate Justice Stephen Breyer to retire so that President Joe Biden can nominate a liberal replacement while Democrats control the Senate.

The group—founded in 2018 by former Obama administration staffers amid then-President Donald Trump's successful effort to pack federal courts with far-right judges—launched an online petition declaring that "it's time for Supreme Court Justice Stephen Breyer to announce his retirement."

The petition states that Breyer "has been a distinguished justice, but now is risking the Senate falling into Republican hands before Democrats can confirm Biden's nominee."

"We have waited long enough for a Black woman Supreme Court justice," the petition asserts. "And with a 50-50 Senate, there is no time to waste. We need to start the process of confirming a Black woman justice now. Tell Justice Breyer: Put the country first. Don't risk your legacy to an uncertain political future. Retire now."

Demand Justice also hired a billboard truck that was spotted circling the Supreme Court with the "Breyer, Retire" message.

Just had this sent to me: Spotted outside the Supreme Court. Comes after our Playbook team previewed this am how… https://t.co/Je6z4VMAJW
— Olivia Beavers (@Olivia Beavers)1617969394.0

"We are now firmly in the window when past justices have announced their retirement, so it's officially worrisome that Justice Breyer has not said yet that he will step down," said Demand Justice executive director Brian Fallon. "The only responsible choice for Justice Breyer is to immediately announce his retirement."

"We cannot afford to risk Democrats losing control of the Senate before a Biden nominee can be confirmed," Fallon added. "Justice Breyer is not entitled to the benefit of the doubt at this point. Those worried about the court's future should speak up to ensure he understands the need for him to time his retirement wisely."

While campaigning for president, Biden repeatedly said he would nominate a Black woman to the nation's highest court if he had the opportunity—a step he called "long overdue."

The risk of Democrats losing control over the Senate—which confirms Supreme Court nominees—is not limited to the outcome of the 2022 midterm elections. The Hill notes that if any member of the Senate Democratic caucus from a state with a GOP governor leaves office for any reason, their replacement would most likely be a Republican.

The Senate is currently evenly split 50-50 between Democrats and Republicans, with Vice President Kamala Harris casting a tie-breaking vote in the case deadlock.

"Justice Stephen Breyer should retire from the Supreme Court: He doesn't believe in court-packing? Or see his conse… https://t.co/mUeEkIig3I
— Mehdi Hasan (@Mehdi Hasan)1617892757.0

Ketanji Brown Jackson, a judge on the U.S. District Court for the District of Columbia appointed by former President Obama, is considered a top candidate to make history on the high court. Biden recently nominated her to fill Merrick Garland's open seat on the D.C. Circuit Court of Appeals.

While Demand Justice is the latest group to urge Breyer's retirement, there have been calls for the 82-year-old to retire since Biden's election. In January, University of California, Berkeley constitutional scholar Erwin Chemerinsky told The Washington Post that "stepping down when there is a Democratic president and a Democratic Senate to replace him... is his best way of ensuring that someone with his values and his views takes his place."

In 2014, Chemerinsky published an op-ed urging the late Supreme Court Justice Ruth Bader Ginsburg to retire while Obama was in office. She did not, and since she was still serving on the bench when she died last September, Trump was able to replace her with far-right nominee Amy Coney Barrett—his third successful appointment to the high court.

The Demand Justice campaign launched on the same day that Biden signed an executive order establishing a commission to explore possible Supreme Court reforms—including increasing the number of justices as allowed by the Constitution. Breyer's opposition to "court-packing" has been cited by some of those who are calling on him to retire.