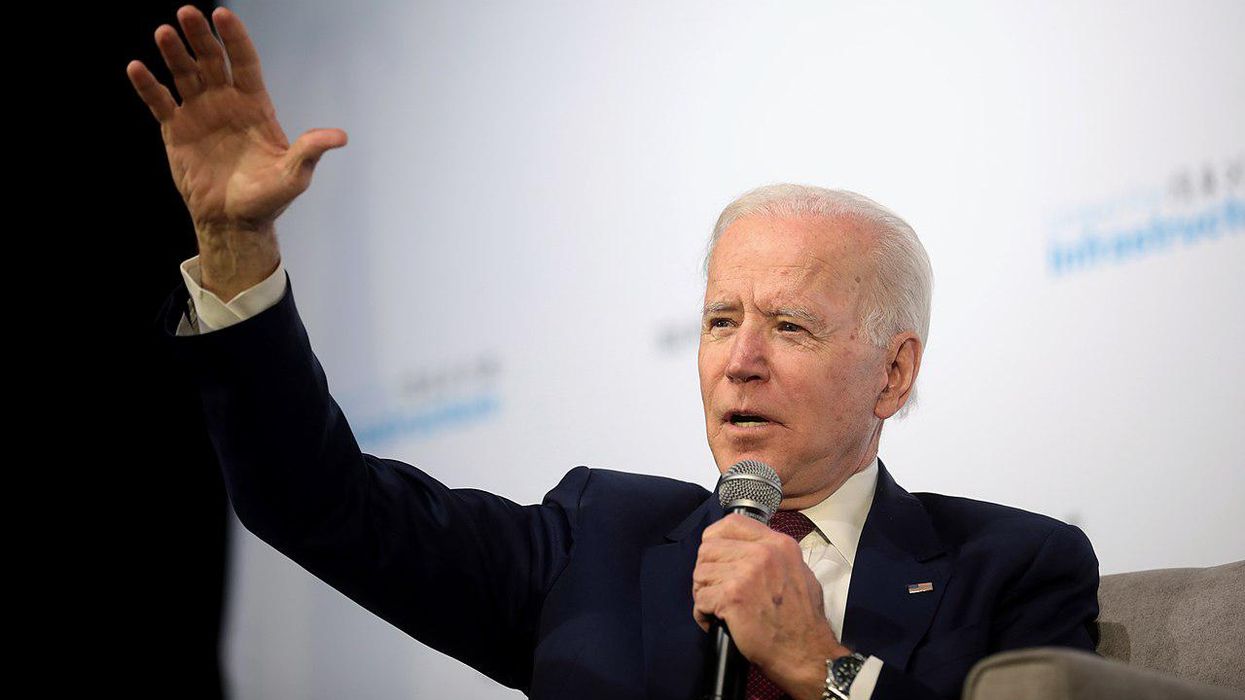 Joe Biden speaking with attendees at the Moving America Forward Forum hosted by United for Infrastructure at the Student Union at the University of Nevada, Las Vegas in Las Vegas, Nevada in February 2020, Gage Skidmore.
Alex Henderson
April 30, 2021

Barack Obama, Bill Clinton and Ronald Reagan are three examples of U.S. presidents who were clobbered in the mid-terms — Obama in 2010, Clinton in 1994 and Reagan in 1982 — but nonetheless went on to win a second term. And in 2021, with Joe Biden three months into his presidency, Democrats fear that a red wave will occur in the 2022 midterms and that they will lose control of the U.S. Senate and/or the U.S. House of Representatives. But journalist Ronald Brownstein, in an article published by The Atlantic on April 29, reports that Biden and other Democrats have a plan for trying to avoid that fate: go big.

On Wednesday night, April 28, Biden outlined his ambitious plans — including ideas for infrastructure and health care — during a speech before members of Congress. Brownstein explains, "The good news for Democrats who watched Joe Biden unveil a historically ambitious agenda last night is that newly elected presidents have almost always passed some version of their core economic plan—particularly when their party controls both congressional chambers, as Biden's does now. The bad news: Voters have almost always punished the president's party in the next midterm election anyway. The last two times Democrats had unified control — with Bill Clinton in 1993–94 and Barack Obama in 2009-10 — they endured especially resounding repudiations in the midterms, which cost Clinton his majority in both chambers and Obama the loss of the House."

Similarly, Reagan did not fare well in the 1982 midterms, when Democrats enjoyed a major blue wave and Reagan was serving his first term. The New York Times' Hedrick Smith, on December 29, 1982, reported, "At midterm, the once-dazzling political momentum of what conservatives enthusiastically called the Reagan Revolution has stalled." Democrats felt energized following their success in the 1982 midterms, but in 1984, Reagan was reelected by a landslide — and former Vice President Walter Mondale, the Democratic nominee, suffered a colossal defeat.

Former President Donald Trump, in contrast to Reagan, Clinton and Obama, was clobbered in the U.S. House of Representatives in the 2018 midterms but was voted out of office in 2020. It remains to be seen what will happen with Biden in 2022 or 2024, but history shows that midterms can be a headache for a president. And according to Brownstein, "the scale of the agenda Biden laid out" on April 28 "underscores Democrats' conviction that their best chance to avoid" losing either or both houses of Congress in 2022 "is to go big with their proposals."

"Counting the coronavirus stimulus plan approved earlier this year, Biden has now proposed more than $5 trillion in new spending initiatives over the next decade — far more than Clinton or Obama ever offered — to be partially paid for by tax increases on corporations and affluent families," Brownstein notes. "On cultural and social issues, Democrats are likewise pursuing a much more ambitious lineup than Clinton or Obama did; Biden is endorsing measures related to a panoramic array of liberal priorities, including election reform; police accountability; citizenship for young undocumented immigrants; statehood for Washington, D.C.; LGBTQ rights; and gun control."

Republicans are hoping that Biden's ambitions will inspire a backlash in the form of a red wave in 2022, but many Democrats, according to Brownstein, believe that being ambitious is the way to try to avoid that fate. And some Democrats are warning that the time for Biden to be ambitious is now because they may not have majorities in the U.S. Senate and the U.S. House of Representatives come January 2023.

"While most Democrats believe that going big offers them their best chance of maintaining at least one of their majorities next year, many quietly acknowledge that no matter what they achieve, they face long odds of holding the House in the first midterm election after the decennial redistricting process spurred by the (2020 U.S.) Census," Brownstein observes. "And given the difficulty of reaching consensus with Republicans, many Democrats think that their window for significant legislative accomplishments will slam shut if the GOP wins either chamber in 2022."