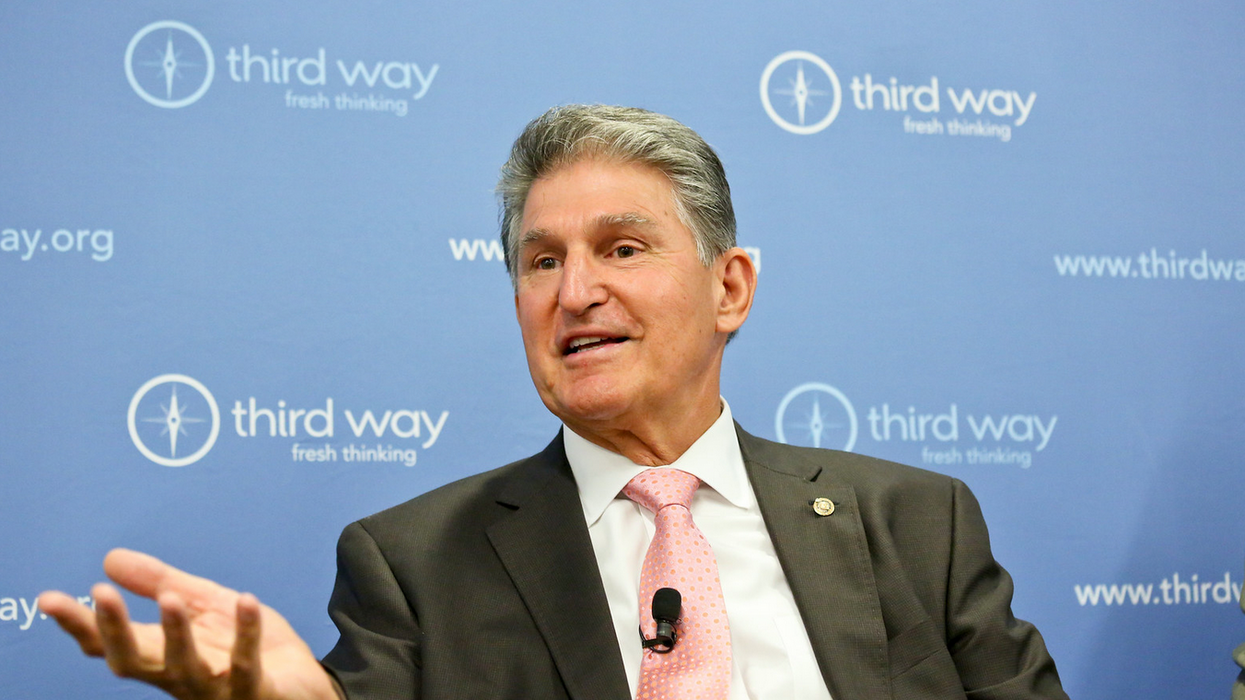 With Trump's numbers low, Democrats have renewed hope for 2018: they could keep the Senate close and maybe win back the House. But to get there, they will need to forge a broad path. That means truly understanding the states and districts that will decide the fate of Congress. On July 19, 2017, Third Way hosted a breakfast discussion with some of the Members of Congress who understand this best: Senator Joe Manchin (WV) and Representatives Emanuel Cleaver (MO-5) and Suzan DelBene (WA-1)
Jake Johnson
and
Common Dreams
April 19, 2021

Senate Democrats are reportedly considering lowering the corporate tax rate proposed in President Joe Biden's infrastructure plan from 28% to 25% to mollify centrists in the caucus, a backtrack that would leave hundreds of billions of dollars in potential revenue on the table.

Citing sources close to negotiations over the nascent infrastructure package, Axios reported Sunday that "Democrats close to the White House expect Biden will accept 25% and pocket it as a political win."

But progressives found little to celebrate in settling for a corporate tax rate 10% lower than it was during the Obama administration. In 2017, then-President Donald Trump and congressional Republicans lowered the rate from 35% to 21% as part of their massive and unpopular tax cut legislation.

"The top corporate tax rate before Trump was 35%. Saying 'corporations must pay their fair share' should mean that pre-Trump rates are the starting point," said Ohio congressional candidate Nina Turner. "We also need to close the loopholes companies use to get away with paying $0 in federal income taxes."

Earlier this month, Sen. Joe Manchin (D-W.Va.)—the most conservative Senate Democrat and a key swing vote—said in an appearance on a local radio show that he and "six or seven other" Democratic senators "feel very strongly" about moving to a 25% tax rate instead of 28%. Senate Democrats can't afford to lose a single vote given their narrow control of the upper chamber, leaving individual senators with significant power to shape legislation.

According to Axios, "Democrats who've privately hinted they may be uncomfortable with going to 28% include Sens. Tim Kaine and Mark Warner of Virginia, Kyrsten Sinema of Arizona, and Jon Tester of Montana."

What a disgrace. The 28% they had previously proposed was already well below the rate during the Obama presidency,… https://t.co/ff5pe0hB3K
— Ben Spielberg (@Ben Spielberg)1618789081.0

Manchin, for his part, has offered little by way of concrete justification for his push for a smaller corporate tax hike. In 2012, the West Virginia Democrat supported an Obama proposal to lower the corporate tax rate from 35% to 28%—a rate Manchin now apparently believes is too high.

In response to Manchin's new stance on the 28% rate, political commentator Mehdi Hasan mocked the notion that Manchin "has put some super serious thought into the difference between a 25% and 28% corporate tax rate and isn't just trying to split the difference between GOP outlier position and reasonable Biden proposal."

Haggling over the proposed corporate tax hike comes as Democrats are attempting to chart a path forward for Biden's infrastructure package amid unified Republican opposition to the roughly $2.3 trillion plan. Last week, Manchin's fellow West Virginia Sen. Shelley Moore Capito (R) suggested that keeping in place the current 21% corporate tax rate is a "non-negotiable red line" for the GOP in infrastructure negotiations—a position that one top Democrat rejected as absurd.

"Corporate revenue is down nearly 40% from the 21st century average since Republicans' tax giveaway," Sen. Ron Wyden (D-Ore.), chair of the Senate Finance Committee, said in a statement. "In 2018, the United States was dead last among OECD countries in how much corporate tax revenue it collected as a share of GDP."

"Republicans' insistence that the most profitable companies in the world shouldn't contribute a single penny to investments in roads, schools, and our clean-energy future is simply not acceptable," Wyden added.