After all the excitement surrounding the launch of Mike "MyPillow Guy" Lindell's Frank Speech vanity project, things appear to have died down quickly. Earlier in the week, the site at least featured the collected works of the biggest 'lection loons in the U.S., and there appeared to be a sign-up screen for all those brutally censored patriots who couldn't wait for a safe space in which to call Hillary Clinton a baby blood-drinking Illuminati reptile person—without ever swearing or using the Lord's name in vain, of course.

Today? You've got Lindell's Frankathon running on a continuous loop, and Absolute Interference, the latest Mike Lindell joint that's supposed to convince nine Supreme Court justices to unanimously overturn the November election, is loitering on the home page like a guy at Dunkin' Donuts who tells every new customer that the COVID-19 vaccines are made of communist mouse farts, evil alien nanobots, and ghee.

In other words, Lindell's site is a huge, huge fail, and it doesn't look like its fortunes will turn around anytime soon, because—and I know this is hard to accept, but it appears to be true—Mike Lindell is basically just a fleshy vessel for the glorification of '70s pornstaches, whose expertise is limited to hawking subpar pillows and melting women's hearts into libidinous puddles of yearning with the titillating timber of his voice.

So where did the launch of a complex social media platform fail where the stuffing of pillowcases with cheap shredded foam so clearly succeeded? Oh, lordy, let us count the ways.

Lindell used Drupal to launch his site, but according to the coders Salon talked to, his team failed to follow even the most basic guidelines for effectively using the service.

MyPillow CEO Mike Lindell's social media site FRANK is facing ridicule from the community of "grandmasters" around the content management software Drupal, who say Lindell's site was destined to fail from the start because his developers failed to take "elementary" coding steps to limit attacks from outside forces. Since its supposed "VIP launch" last Thursday night, Lindell's platform has experienced numerous crashes, and at this writing on Thursday evening the site remains down.
Drupal's site explains that its software is "used to make many of the websites and applications you use every day. Drupal has great standard features, like easy content authoring, reliable performance, and excellent security." Drupal is open source, meaning that anyone can download it or modify it as they please — but it helps if they know what they're doing.

"It helps if they know what they're doing." Pfft. Everything is possible with God. Except this, apparently.

Now, I know about as much about launching a social media platform as Lindell knows about successfully cutting his own hair, and that's why you hire experts—which Lindell apparently neglected to do.

One IT maven who spoke to Salon said that Drupal simply isn't the right service for building out the kind of social media platform Lindell envisions, because it isn't designed to host such a large volume of user content. "In my professional opinion, it will be extremely unlikely, if not impossible, for Lindell to accomplish his vision with Drupal and his own servers," the expert said. "Despite how much I love it, Drupal simply isn't the right tool for the number of users with the features that he wants to provide. It would take a massive effort of 12 to 18 months to build out the needed hosting setup and application architecture, and this would come with an enormous degree of risk. The idea that he could do this in just a couple of months is patently absurd, and I think the results speak for themselves."

Another expert on the Drupal platform was even less diplomatic.

"This is a shit show," the expert said, calling this an "obvious" issue that coders learn how to prevent in "Drupal 101." Other "grandmasters" poked fun at the developers' mistakes, which were described as "extremely obvious" and juvenile in nature. One expert concluded that, based on the evidence, Lindell's developer team was inexperienced and lacked basic knowledge, and described the output of the pillow magnate's alleged 10-person staff as "not even student work."

This is what the site looks like as of this writing. It was supposed to be fully functional and ready for the general public on April 19. 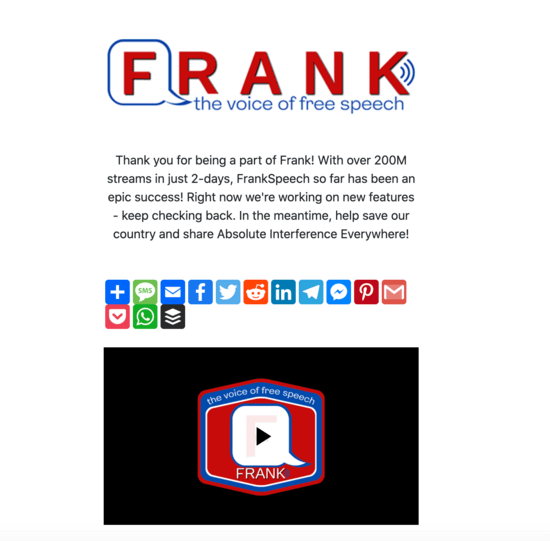 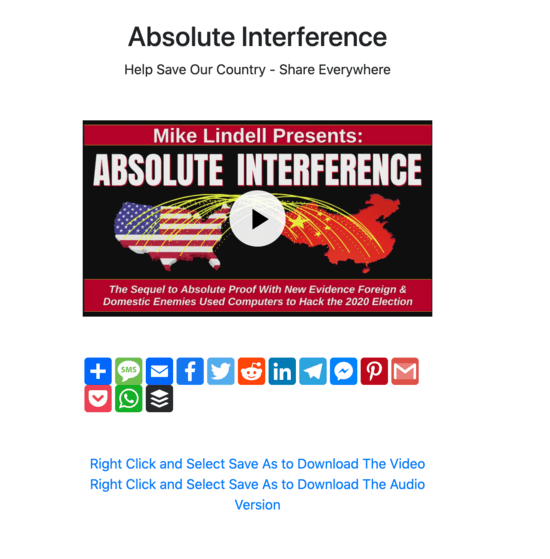 Note the icons for all the evil Big Tech companies Lindell claims are destroying our country.

So if you want to watch the Frankathon again … and again … and again, or if you feel somehow compelled to watch Lindell's latest kookaburra film (movie night at your house, Justice Sotomayor?), this is the site for you.

Unfortunately, your own voice has been silenced, because the MyPillow Guy is myopic.