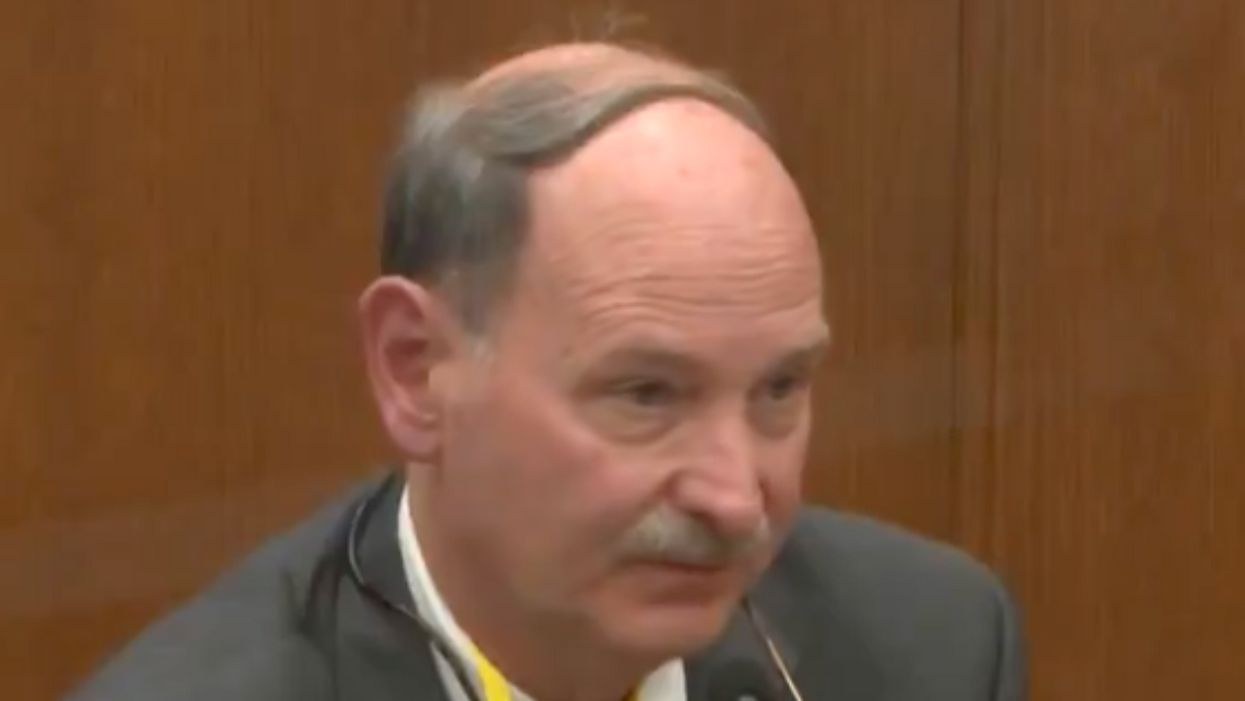 Despite a medical doctor's compelling testimony and myriad police officials deeming the force applied to George Floyd excessive in the widely-publicized murder trial of ex-Minneapolis cop Derek Chauvin, a political committee fundraising for pro-police candidates blamed the Black father for his own death.

In an April 1 email The Intercept obtained, a representative of the Protect Our Police Political Action Committee advocated for Chauvin's innocence and in effect, asserted Floyd's guilt in his own death. "Our founding fathers knew the importance of a fair justice system, but unhinged radical cop haters are taking every opportunity to pervert the law to advance their agenda," the representative said in the email. "That's exactly what's happening in Minnesota to officer Derek Chauvin. Let's get one thing clear: George Floyd tested positive for COVID-19 and was high on a lethal dose of fentanyl when he died May 25th, 2020… but the mainstream media doesn't want you to know that!"

The PAC representative went on to say: "Chauvin is facing trial for a murder he did not commit — leftist radicals want to make an example out of an innocent man that followed the protocol he learned in his training. They want to ruin his life for political gain." Nick Gerace, a former Philadelphia cop and president of the PAC, later blamed the email—signed with his name—on a marketing firm the PAC hired.

"I terminated our relationship with this firm and the individual involved with this tactless messaging," he said in a statement tweeted from the PAC's account. "Chauvin's actions were examples of bad policing and poor training that directly caused George Floyd's death in my opinion."

He continued in the statement:

"The kind of messaging and innuendo included in that single email is not in line with our mission and I vehemently denounce it. I am not a politician or an elected official. I will do what they rarely do. I am taking responsibility and I sincerely apologize for this mistake. This will never happen again. We can do better. We will do better. We must do better.
Since we started this organization 9 months ago, we never once defended the actions of Chauvin or blamed George Floyd for his tragic and unnecessary death. This touches on one of our main motivations for starting this organization."
Not all cops are bad or bastards. There are almost 800,000 law enforcement offices in the US and the vast majority serve the public with distinction and integrity. However, there can be bad police officers and there are certain reforms that are necessary to increase the overall safety of our community and our law enforcement. This will take adequate funding and effective training. Let me be clear. No one hates a dirty cop more than a good cop. Our organization stands for good cops and we will continue to advocate on their behalf and for public safety."

However offended Gerace claims to be, the email was not out of accordance with other fundraising materials emailed by the PAC. The fundraising committee has declared progressive Philadelphia prosecutor Larry Krasner, who's up for reelection this year, a target for his policies, which are aimed at ending mass incarceration and pursuing alternatives to incarceration. The PAC also described the Black Lives Matter organization as an "anti-cop operation" and accused the Defund the Police movement, calling for the reallocation of a portion of police budgets to social services, of having "blood on (its) hands," The Intercept reported.

Interestingly enough, the PAC doesn't seem to advocate nearly as fiercely for victims when officers have blood on their hands. As outraged as Gerace appeared to be, not a single tweet from his organization even mentions Floyd—except to retract the unnamed marketing firm's email. That's despite hours of heart-wrenching testimony from witnesses detailing how they felt frustrated and helpless as officers prevented them from doing anything to help Floyd.

On the ninth day of the trial, physicians analyzed in troubling detail the conditions that led to Floyd's death. Doctors Martin Tobin, a Chicago pulmonologist and critical care physician, and Bill Smock, an emergency medical physician, both made a mockery of the defense's notion that fentanyl detected in Floyd's system caused his death. Smock testified that Floyd's fentanyl use did not impact his breathing and there was no evidence of a blood clot, heart attack, or arrhythmia. "Mr. Floyd died from positional asphyxia, which is a fancy way of saying he died because he had no oxygen left in his body," Smock said.

Tobin detailed in court how "a healthy person, subjected to what Mr. Floyd was subjected to, would have died." He demonstrated signs of a brain injury four minutes before Chauvin stopped kneeling on him, the doctor said on the stand.

"Mr. Floyd died from a low level of oxygen. And this caused damage to his brain that we see, and it also caused [an arrhythmia] that caused his heart to stop," Tobin said. He explained that the level of oxygen in Floyd's body dropped to zero, and at that point "there's not an ounce of oxygen left in his body."

Both Tobin and Smock analyzed for the jury images of Floyd pushing his fingers against the street to lift himself up. "To most people, this doesn't look terribly significant, but to a physiologist this is extraordinarily significant, because this tells you that he has used up his resources and he's literally trying to breathe with his fingers and knuckles," Tobin said.

View other video related to the Chauvin trial: