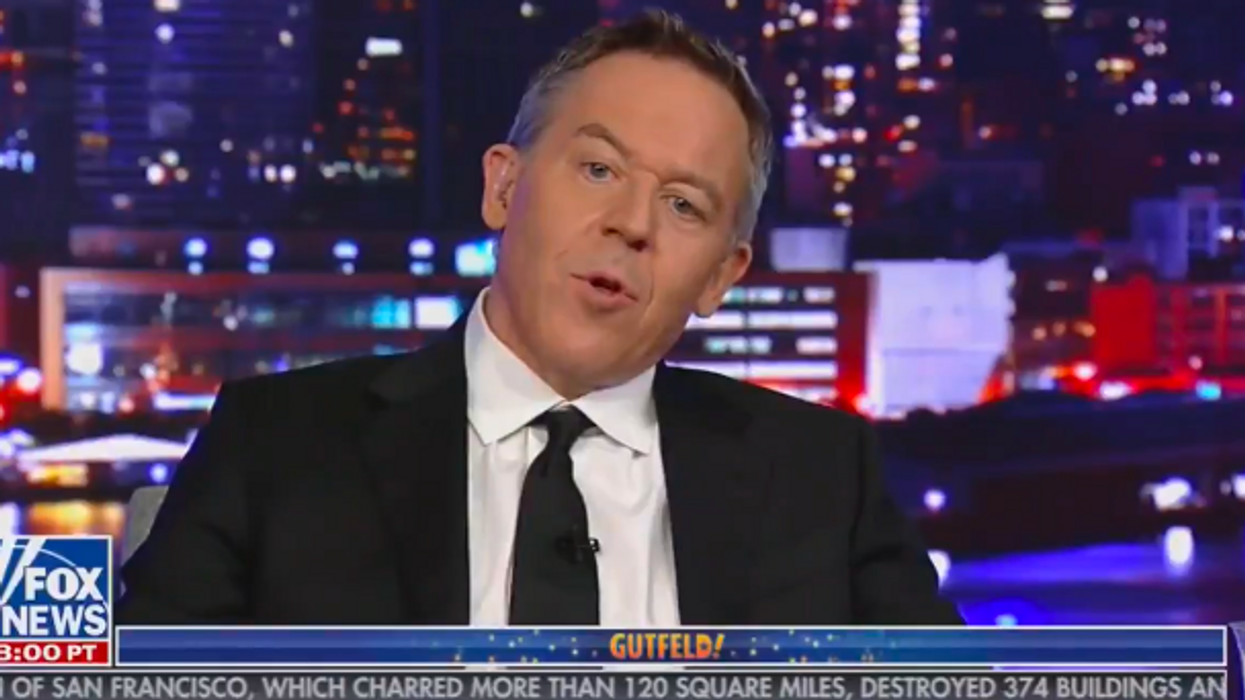 Greg Gutfeld has always been Fox News' version of Greg Gutfeld. He has positioned himself as the funny person at Fox News, which is sort of like being the best-smelling dung beetle in a pile of manure. He has a new show on Fox, and boy is it a … hoot? Called Gutfeld!, Greg takes on Fox News' versions of the day's events and lampoons the Biden administration and the illiberal media. An early review online by @EvalsAdorable summed up the general overview of the Gutfeld! experience: "It's basically the Daily Show, but without the humor, imagination, or poignant observations."

The show began on Monday, and it was not good. At all. Its second night seems to have solidified Gutfeld's place in history. It's tough to truly explain how not funny this comedy show is. In some respects it is so acutely unfunny that one wonders if Greg Gutfeld might pull off his face mask at some point to reveal Andy Kaufman, back from the great beyond, playing one final long-con performance art piece on right-wing psychosis. But everyone is weighing in, and everyone professional or not, is more of a comedian than Greg Gutfeld will ever be.

There are a few things Gutfeld does on his show: he attacks MSNBC's Brian Williams, making the same joke over and over again—Brian Williams tells big story lies; he says Joe Biden is old and makes jokes about Joe Biden being old and senile; he attacks liberals for being racists who are all white and condescending; and he attacks comedy for being funny. The attacks on Biden and liberals are standard Fox News copy, and the attacks on Brian Williams are likely the result of Gutfeld's financial need to outperform Williams as the two men share a time slot, and Gutfeld's Gutfeld! likely only lives as long as it can compete with Williams.

To be clear, the idea of having a conservative comedy show has long been a holy grail that compassion-free right-wingers have hoped to achieve. You might remember the short-lived Fox News attempt at doing their own Daily Show, back in 2007, Half Hour News Hour. You don't have to watch it, but I would suggest you take a peek at the 50 second mark joke attacking liberals for not being able to tell the difference between television characters and real life politicians.

Gutfeld hosted Fox News' Red Eye, a wee hours in the morning show that frequently had on real comedians, in a radio morning-drive-style format. As Red Eye faded away, Gutfeld found himself getting shots on other Fox panels, and the whiff of his sense of humor seems to have been the only quality he had.

Gutfeld's lack of intelligence, and his general mediocrity, has always been touched with this delusion that he was somehow the wry humorist on Fox News panels. Really, he just says the exact same racist shit that the rest of Fox News' hosts say, but from a lightly reclined physical position (see Glenn Beck's use of pens or glasses as a hand prop to denote thoughtfulness and avuncular trust), with a smug (most likely Bill Maher-inspired) turn of the face that indicates to the white supremacist automatons on the panel that he is making a sort of joke and one should laugh after he's finished.

But let's get to the jokes! Trigger warning: These jokes are neither laugh-out-loud funny nor are they groan-out-loud groan-y. In fact they aren't really anything more than somehow more poorly written Fox News copy, said in an approximation of a humorous delivery.

Greg Gutfeld’s new Fox News late night comedy show is one of the worst things I’ve ever seen and I was in Gigli.
— David Pressman (@David Pressman)1617768851.0

One of the reasons why conservatives want and need people like Gutfeld to succeed is that humor and satire does have the ability to allow for more controversial opinions to get through into the mainstream without being analyzed for their worth. Not truly great humor, mind you, but being allowed to make generalizations is a part of comedy, and sweeping generalizations are the entirety of the right-wing intellectual platform.

There is also a large comedy market for more libertarian-like (mostly) males that are not nearly as conservative as the Republican Party, but are stressed out about cultural change. Frequently, people like Gutfeld use the excuse that they were "joking" when saying something offensive, hoping to lessen the brunt of the backlash to their putrid ideas. There is a never-ending conversation from the comedy world about "cancel culture," and it is identical to the conversation comedians had about political correctness years ago.

The argument goes that people's livelihoods are being attacked because some people don't find them funny. The comedy-line goes that any comedian should be allowed to say anything because comedians are constantly trying to push the envelope on socially accepted boundaries in search of humor, and sometimes they will miss the mark. The conclusion of these arguments is that attacks on comedians amount to censorship.

Truly great comedian Laurie Kilmartin pointed out that Gutfeld isn't the guy to carry this version of comedy across the finish line.

Back in the day, I had two bookings for Red Eye. During the first appearance, I did an Ann Coulter joke and because… https://t.co/lMItABsvAU
— Moderna Kilmartin (@Moderna Kilmartin)1617219957.0

And because she's actually funny.

A solid year of comedians doing jokes to no audience is why Gutfeld thinks jokes aren’t supposed to get laughs. It’s our fault.
— Moderna Kilmartin (@Moderna Kilmartin)1617806878.0

We are talking about this show.

Congratulations to the confused raccoon who wandered into one of the UCB Sketch Writing 101 classes I taught ten ye… https://t.co/XD2IPHO7Zi
— Julie Klausner (@Julie Klausner)1617715084.0

Here's a little comedy math for you.

But not everyone is excited about being scooped by Gutfeld!.

Frighteningly, like a performance artist, there is something so watchable about a garbage fire.

Seriously, this is so bad it almost seems like it was written by someone punishing Greg Gutfeld.

In fact, a parody account popped right up, called "Gutfeld Writer's Room." It's a fine slice of pastry, but it's considerably funnier than the Greg Gutfeld show.

And this made me laugh.

Someone in the audience at the Gutfeld show watching him do his monologue https://t.co/digSNVGOwr
— Carey O'Donnell (@Carey O'Donnell)1617729088.0

Greg Gutfeld says the reviews are wrong because he knows funny.

Well, we got that out of our system.