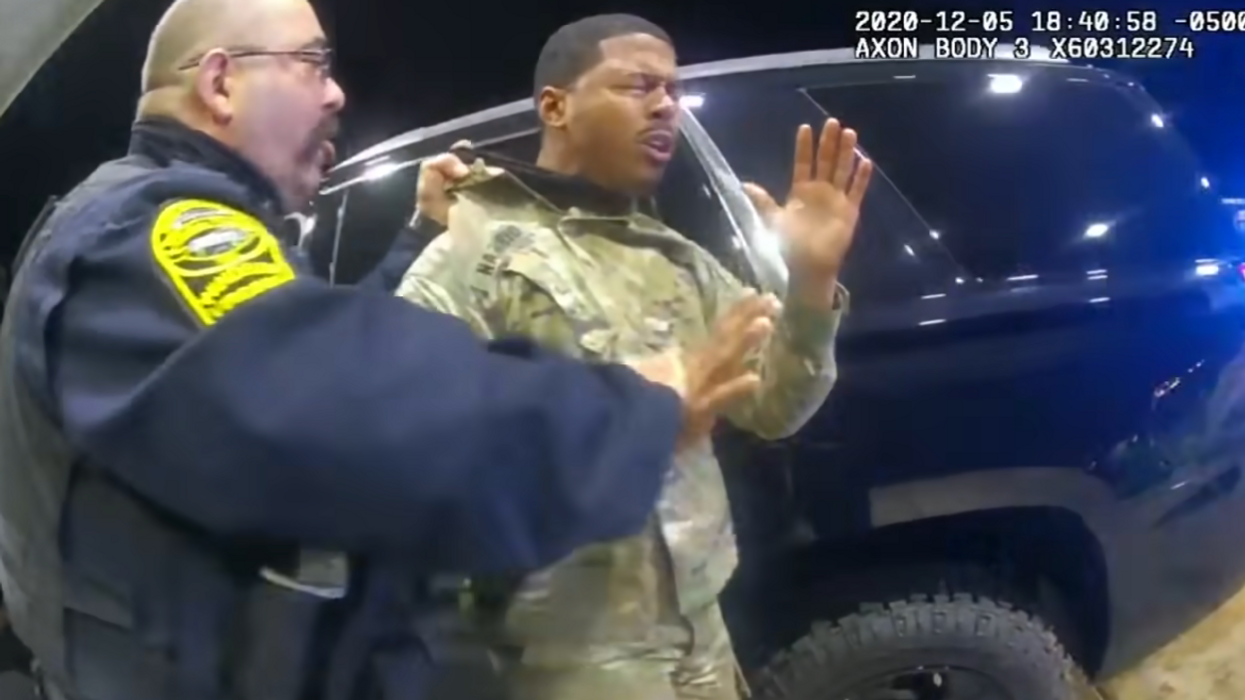 Libertarian journalist Radley Balko has stressed that there are two wildly contrasting approaches to police work in the United States: "de-escalationists" and "no-hesitationists" — and that the latter was very much in evidence when George Floyd was killed on in Minneapolis on May 25, 2020. University of Baltimore law professor Kimberly Wehle, in an article published by the conservative website The Bulwark on April 13, discusses "de-escalation" as it pertains to the shocking abuse that U.S. Army Lt. Caron Nazario suffered at the hands of two police officers in Windsor, Virginia: Joe Gutierrez and Daniel Crocker. And according to Wehle, a former assistant U.S. attorney, video of the incident offers a glaring example of how police should not conduct themselves.

"This week," Wehle explains, "it's a bodycam video taken in Windsor, Virginia on December 5, 2020, that has the nation reeling. The footage shows Caron Nazario, a U.S. Army second lieutenant of Latino and African-American descent, being pulled over at night while driving his Chevrolet Tahoe to Petersburg, Virginia, after a drill weekend. Nazario was in full Army fatigues; his brand-new SUV still had its paper license tags. Upon seeing the police cruiser, Nazario drove approximately a mile to a lighted gas station and stopped, placing his cellphone on the dashboard with the video feature on."

Although Nazario wasn't at all confrontational with the officers, they pointed their guns at him. Nazario was pepper sprayed, violently thrown to the ground and handcuffed. Clearly, Nazario experienced the "no-hesitationist" approach to police work that Balko considers a recipe for disaster.

"It's hard not to view the Nazario videos — there are three, two from police cameras and one from his cell phone — in light of the events that led to George Floyd's death at the knee of former Minneapolis police officer Derek Chauvin, whose murder trial is now in its third week," Wehle observes. "First, both men were confronted by police over very minor infractions…. Second, both men tried to de-escalate the situation and persuade the officers to act within reason."

The law professor continues, "Third, neither Floyd nor Nazario were armed, neither said anything threatening or spoke in aggressive tones, and both either had their hands up or were handcuffed and/or prone on the ground throughout most of the time they were being questioned and physically handled by police."

Wehle goes on to say, "The officers in the Nazario case, as in the Floyd case, were irrational and out of control. If you put yourself in the shoes of either Floyd or Nazario, it's impossible to imagine what more could have been done to evade their wrath."

The law professor and former assistant federal prosecutor notes that in police work, the term "de-escalation" has been defined as "a reduction of the level of intensity." Wehle doesn't use Balko's term "no-hesitationist" in her Bulwark article, but she clearly believes that what Nazario and Floyd experienced was the polar opposite off "de-escalation."

"De-escalation tactics include communicating slowly and clearly, backing off from taking immediate action if a situation is tense, exercising compassion, and even coming back later to enforce the law if needed," Wehle writes. "By contrast, the Floyd and Nazario bodycams show officers angry, yelling, demanding obedience, assaulting without provocation, and threatening adverse action if anyone — even bystanders — show any level of defiance…. As the bodycam videos show, these officers were in no state of mind to use reasonable force, let alone be trusted with firearms."