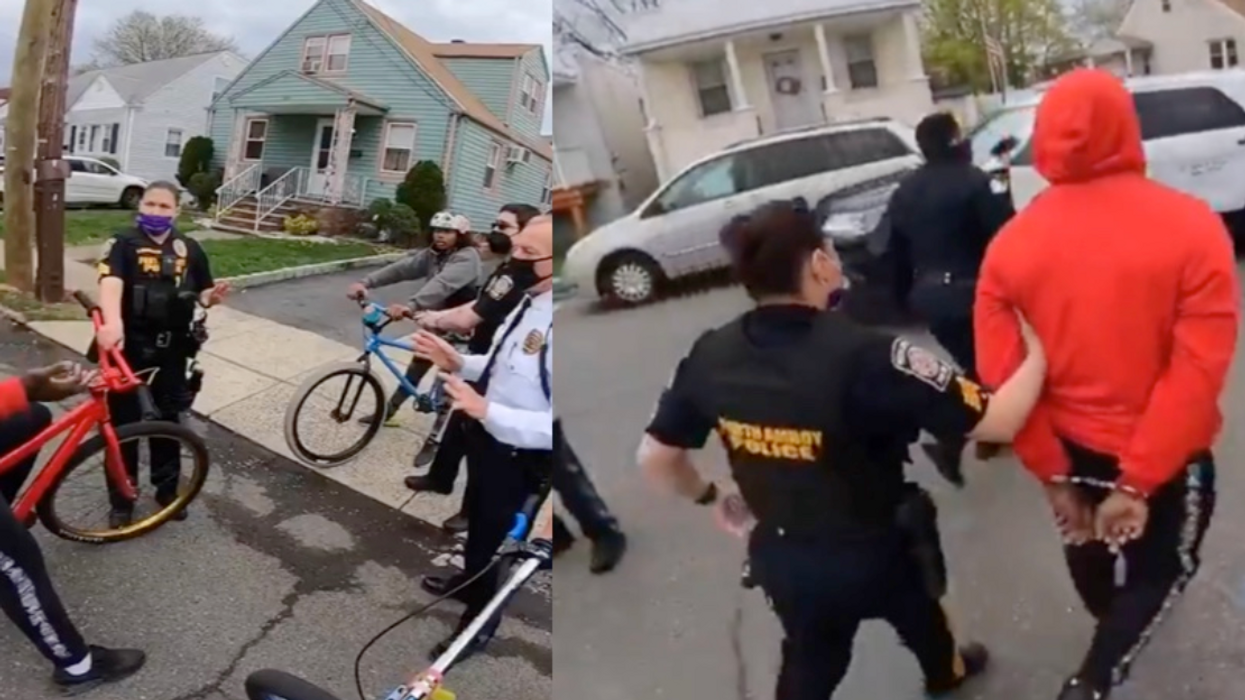 Police officers in Perth Amboy, New Jersey are under fire after video clips of them appearing to harass a small group of Black teens who were riding their bikes through town went viral. Perth Amboy has a law requiring a bicycle "license tag" but the teens say they live in Edison, and were just riding home.

At one point six police cars were involved. The officers ordered the teens off the bikes, confiscated at least one, and arrested one teen who was arguing they shouldn't have to give up their bikes.

Later, at the police station, one officer told the teen he was lucky to get his bike back, asking if he had the purchase receipt for the bike, and if it is registered with them. The officer also says the teens were told "to stay on the sidewalk," but they were also told to stay on the road and ride with traffic. She says they did all this for their safety.

Part of Perth Amboy's extensive bicycle law reads: "An application for a license to own and operate a bicycle shall be made to the Chief of Police in writing upon a form approved by the City Council. Upon approval of an application, the Chief of Police shall provide, at the expense of the city, a proper license tag which shall be attached to the frame of the bicycle in a substantial manner. The removal of such tag, except by proper authority, shall be a violation of this chapter. A license fee of fifty cents ($0.50) shall be charged per year for each bicycle. Such license shall be issued as of the calendar year and shall be effective for such period."

"The rider of a bicycle shall not allow it to proceed in a street by inertia momentum, with his feet removed from the pedals, nor remove both hands from the handlebars while riding the bicycle, nor practice any trick or fancy riding in a street or carry another person upon the bicycle."

This is Perth Amboy, NJ. Are the police really arresting kids over bike registrations? Does it really require this… https://t.co/9fDcKzMJgr
— Amol Sinha (@Amol Sinha)1618889114.0

I rode my bike through Perth Amboy, NJ last year. No one asked me for my bike license. I wonder why. https://t.co/VRsHggDxbv
— Charlie O'Donnell (@Charlie O'Donnell)1618916915.0

Now, let's take a quick second, These guys state they are from Edison, NJ. There is no requirement for a license/re… https://t.co/T9c7NvLy08
— Serotonless Graves (@Serotonless Graves)1618885923.0

Imagine being some miserable police force, like that of Perth Amboy in NJ, who’s latest claim to fame is: trending… https://t.co/35qXUOaZD6
— Gerald Hampton (@Gerald Hampton)1618920774.0

I broke this law last summer when I stopped in Perth Amboy's waterfront ice cream shop on my ride back from New Bru… https://t.co/Fro7MGtE88
— Brian Hedden (@Brian Hedden)1618922981.0