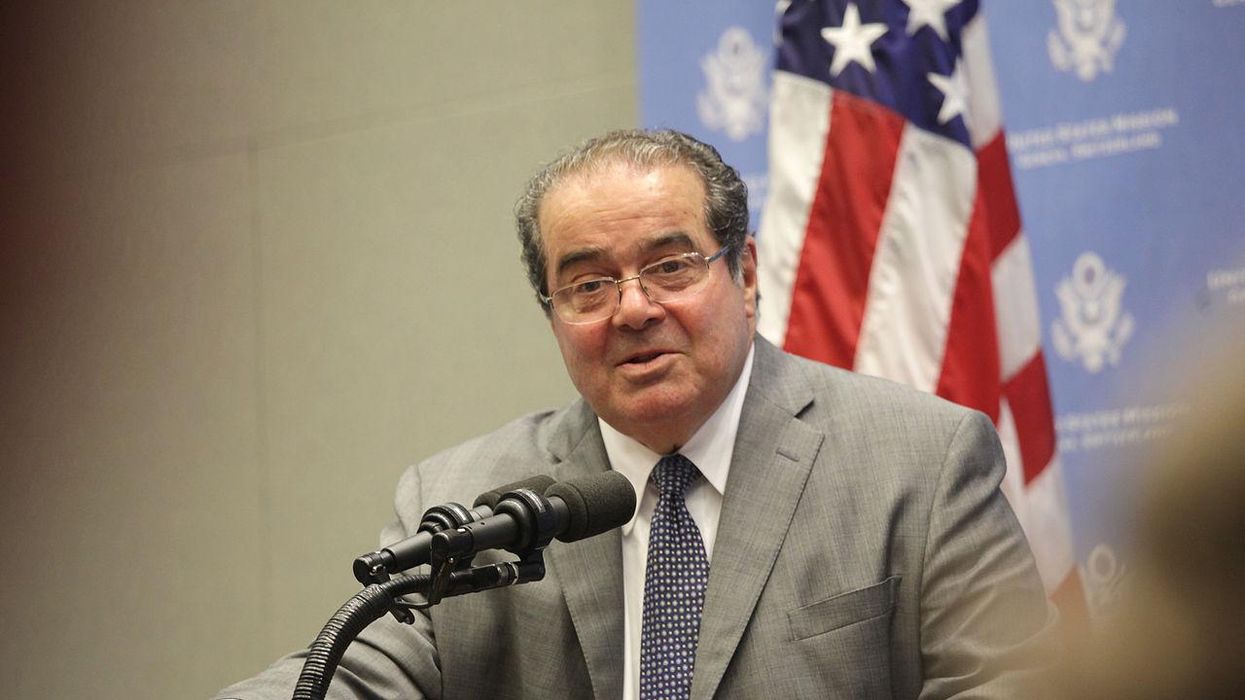 During his many years on the U.S. Supreme Court, the late Justice Antonin Scalia lived up to his reputation as a staunch social conservative — and he not only had strong disagreements with liberal Justice Ruth Bader Ginsburg, but also, with the right-wing libertarian Justice Anthony Kennedy (who retired in 2018 and was, like Scalia, a Ronald Reagan appointee). But journalist Mark Joseph Stern, in an article published by Slate this week, argues that Scalia would have major issues with the High Court in a case examined on Monday.

"Scalia would be aghast at arguments on display at the Supreme Court on Monday in Americans for Prosperity v. Bonta," Stern explains. "The case constitutes a challenge to a California disclosure law that requires tax-exempt charities to disclose their high-dollar donors to the state attorney general. It does not involve censorship or compelled expression; no one is being silenced or forced to speak against their will. It does not even involve public disclosure; the attorney general is obligated to keep the information confidential. The only alleged infringement on the 1st Amendment is the possibility that an inadvertent leak by the California attorney general will reveal donors' names, and they will face accountability for their donations."

Stern notes that in 2010, Scalia wrote, "Requiring people to stand up in public for their political acts fosters civic courage, without which, democracy is doomed." And the journalist explains why that belief is at odds with what members of the conservative-leaning court have had to say in Americans for Prosperity v. Bonta this week.

"Monday's arguments revealed that a clear majority of the Supreme Court is plainly prepared to either block the law's application to the plaintiffs or strike it down altogether," Stern notes. "If Scalia was correct in 2010, then this case is an ominous sign for a democracy that's already under stress."

Stern describes the California law examined in Americans for Prosperity v. Bonta as a "modest" one that "requires nonprofits to provide a 'Schedule B' disclosure — which contains the names, addresses and total contributions of 'substantial contributors' — to the state attorney general."

Stern explains, "A 'substantial contributor' is defined as someone who gave more than $5000 to the nonprofit in a single year. But if a nonprofit receives at least a third of its overall support from government grants and public contributions — and many do — the threshold is much higher: Only individuals who contribute more than 2% of the organization's total support are listed. So, for example, a donor to the plaintiff Americans for Prosperity would have to donate $341,000 to be listed on the disclosure form."

According to Stern, conservative Supreme Court justices in Americans for Prosperity v. Bonta seem to be saying, in essence, that "anonymous funding of controversial nonprofits merits generous 1st Amendment protections."

"This position is almost certainly a reaction against 'cancel culture,' which some conservative justices perceive to be a growing threat," Stern writes. "And it shows how an obsessive hatred of 'cancel culture' flips constitutional values on their heads. Criticism is not censorship; the constitutional right to free speech does not include a guarantee against hurt feelings."

Stern adds that Scalia, in contrast, wrote, "There are laws against threats and intimidation. And harsh criticism, short of unlawful action, is a price our people have traditionally been willing to pay for self-governance."

"Based on Monday's arguments," Stern writes, "it's obvious that the conservative justices are prepared to block the application of California's law to some groups. It's not yet apparent, though, how far they'll go. The details of the decision will determine how many other disclosure rules, including those governing election spending and contributions, can survive at this Supreme Court. But the early signals suggest that the conservative majority is heading in a direction that, according to Scalia, spells nothing less than doom for American democracy."