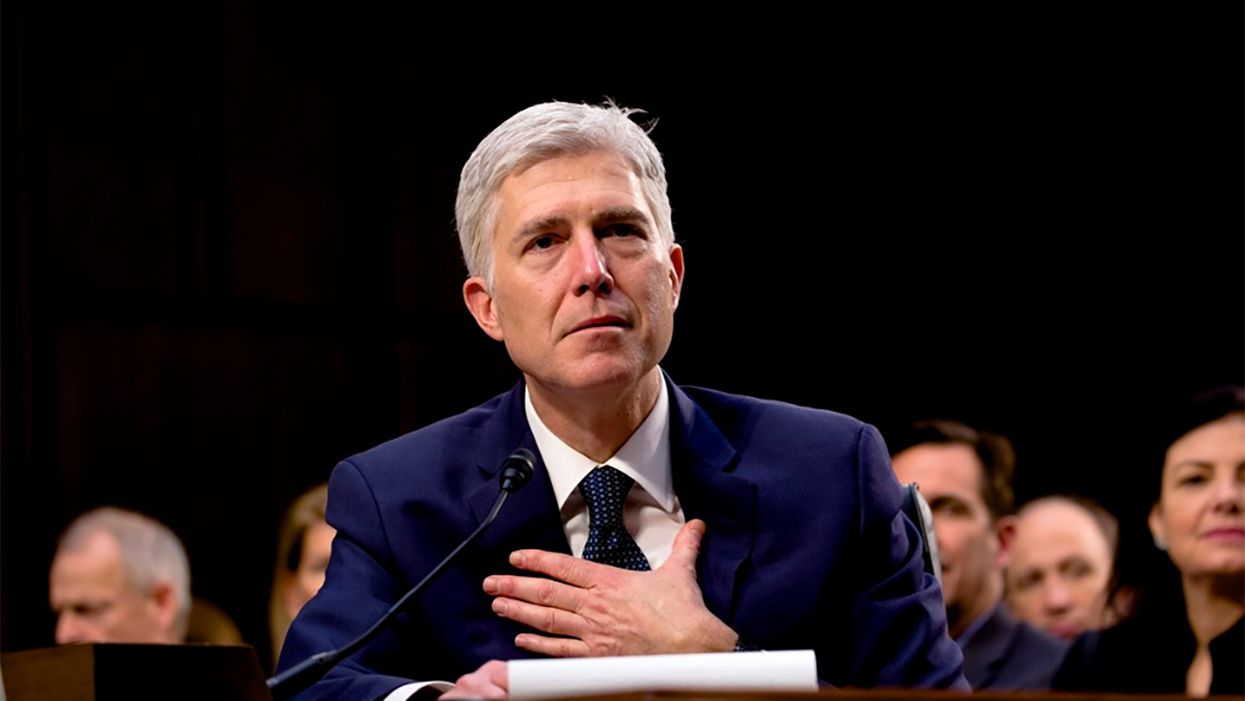 Justice Neil Gorsuch, the first of three right-wing justices that former President Donald Trump appointed to the U.S. Supreme Court, embraces a legal theory known as the "nondelegation doctrine" — which claims that the U.S. Constitution imposes strict limits on Congress' ability to let the federal government's executive branch set rules and regulations. But University of Michigan law professors Julian Davis Mortenson and Nicholas Bagley vehemently disagree with that theory in an article published by the Columbia Law Review on Thursday. And Mortenson and Bagley discussed the subject with Slate's Mark Joseph Stern for a Q&A interview published the following day.

When Stern asked them what the nondelegation doctrine is, Mortenson responded, "Nondelegation is a judicially created doctrine that has had exactly one year of actual existence, 1935, over the 2½ centuries of the American republic. It says, in essence, that only Congress can make rules that govern private conduct, and all administrative agencies can do is apply the rules and maybe fill in some small details about the rules in the course of doing their work."

In 1935, Franklin Delano Roosevelt was president, and the fiscal conservatives on the U.S. Supreme Court were openly disdainful of his liberal economic policies.

Mortenson told Stern, "The Supreme Court was very hostile to the New Deal, to economic interventionism. And it issued two opinions concluding that Congress had given the president too much discretion without giving him enough guidance. Those decisions happen, and then the (nondelegation) doctrine is gone for many years."

Bagley interjected, "It's pretty much dormant until the 1980s and 1990s, when the conservative legal establishment starts to poke around for doctrines that might be able to restrain the federal government at a time when they felt it was too big, too powerful, and doing too much at the states' expense. Conservative scholars glom onto nondelegation and start pushing for its reinvigoration in the courts."

According to Bagley, the nondelegation doctrine was "slapped down" by the Supreme Court in 2001 in an unanimous decision written by the late Justice Antonin Scalia. But Bagley notes that Justice Clarence Thomas, writing separately, said that he was open to the possibility of reviving the nondelegation doctrine if he could hear convincing originalist arguments in favor of it.

Stern points out that proponents of the nondelegation doctrine believe that the Framers of the U.S. Constitution embraced it as well, but Mortenson and Bagley disagree.

Bagley told Stern, "When you talk about the founding era, there's an awful lot to draw on because founders talked about their new Constitution all the time. If nondelegation was a thing, you should expect to find direct evidence of it. You'd expect it to arise in debates over laws that empower the president to act without much guidance from Congress. And when you look at those debates, it never crops up. It never shows up at all."

According to Mortenson, "delegation" — the opposite of nondelegation — "was deeply embedded in the operating system of governance throughout the founding period and throughout the 18th century. There is pervasive delegation in every direction throughout Anglo-American governance."

In their Columbia Law Review article, Mortenson and Bagley are not attacking, per se, the originalist or "strict constructionist" view of jurisprudence. Rather, they are arguing that the nondelegation doctrine is inconsistent with an originalist philosophy.

When Stern asked Mortenson and Bagley if they have "any hope" that Gorsuch and others who embrace the nondelegation doctrine will read their article and change their minds, Mortenson responded, "I have hope. I read Justice Gorsuch as very earnest and thoughtful. I think our research is so overwhelming that he might be willing to listen."