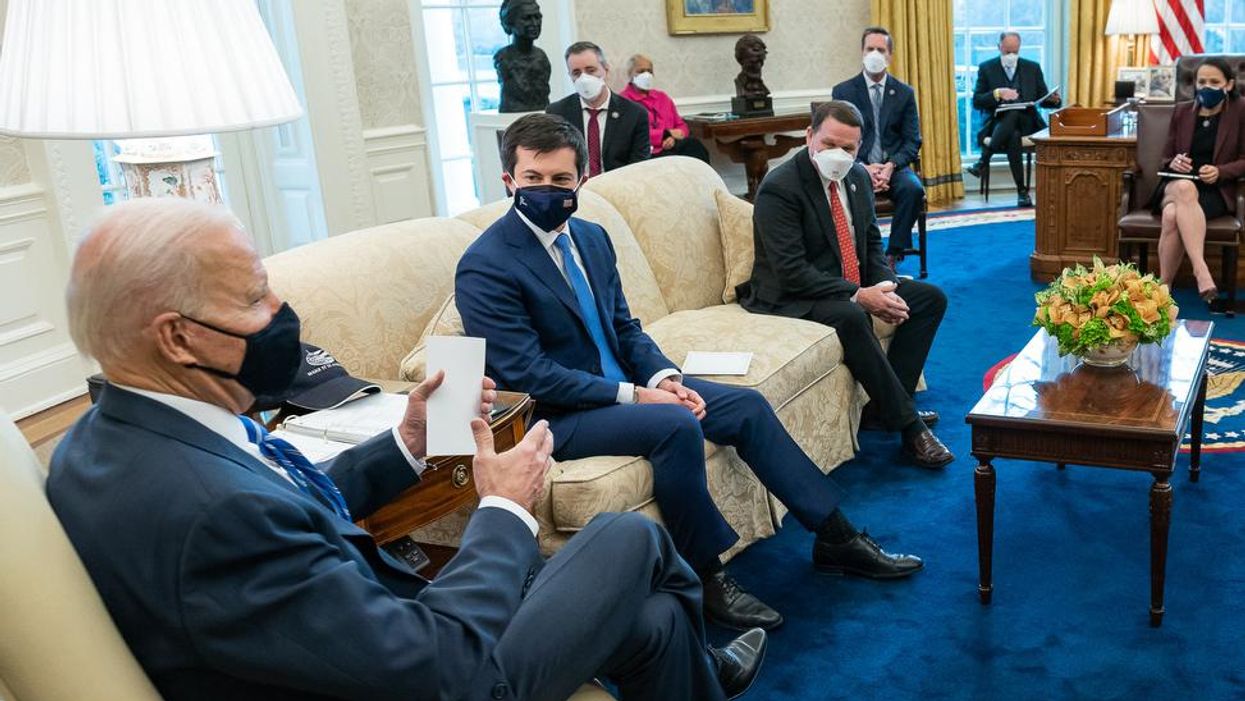 The United States Chamber of Commerce is pretty much the gold standard when it comes to indicating the political opinions of corporate America. For this reason, it's a bit curious that one of the nation's biggest business lobbies isn't doing what you'd expect in the face of growing momentum toward raising corporate rates. Indeed, it kinda sorta feels like the hoary anti-tax juggernaut is kinda sorta being squishy.

Instead of saying it opposes tax hikes, outright, it's saying that Joe Biden's bid to raise taxes in order to pay for infrastructure and other programs in the national interest will undermine chances of getting bipartisan support in the US Congress. Per the Times:

"Raising corporate taxes, and others, is kind of a nonstarter for Republicans. It's kind of a nonstarter for us, too," said Ed Mortimer, the chamber's vice president of transportation and infrastructure. But he said: "We believe the administration has opened the door for other ideas to be considered. It's a legislative process. Whatever the president lays out is not going to be the final bill."

It's kind of a nonstarter? As they say, that's not a no.

It may seem like a loosey-goosey search for a third way between the desire for new and improved infrastructure (which is good for business) and the desire for not paying for it. I can't help seeing it another way, though. Acute softness seems to me another indicator of the fundamental shifting underway, in which everything everyone thought was bad over the last four decades is going to seem pretty good in the near term, and everything everyone thought was good over that period is going to seem pretty bad.

The United States Chamber of Commerce is only as powerful as the trust it can place in the Republican Party. The Republicans, however, are fracturing. It's largest faction has descended into full-on fascist collectivism. The faction seeks to dominate everything, even business profits. With the Republicans increasingly unreliable, it's increasingly difficult to fight the Democrats alone. Business elites seem to be creating future space for the possible appeasement of liberalism to avoid losing by opposing it.

It didn't have to be this way. The Republicans could, and still can, take the side of democracy—which is to say, the side of profitability—but there are few incentives in place for that to happen. Instead, the Republicans are doing almost everything they can to demonstrate their anti-democratic bona fides, from suppressing the vote in Georgia to censoring speech on college campuses, from railing against make-believe "cancel culture" to attempting to cancel real gender and trans rights. The Republicans, in effect, are telling businesses it's us or your profits, and the choice is no-brainer.

There is, however, a darker turn. The fascist wing of the Republican Party, which as I said is the largest, is taking aim as private enterprise itself. This has surely not gone unnoticed. The estate of Theodor Geisel, or "Dr. Seuss," for instance, is a privately owned entity free to do what it wants within the law. It chose recently to discontinue publishing new editions of certain Geisel books for its own reasons. Yet the reaction by the Republicans put "The Cat in the Hat" creator on par with Stalin and Mao.

More concerning is the reaction to proposed "vaccine passports." Originating from the private sector, the idea aims to create some kind of documentation to show that people have been inoculated against the covid and are safe to enter sporting arenas and such. (I'm guessing businesses want this, not unreasonably, as a hedge against potential future lawsuits.) There are many efforts toward this end, public and private, happening all at once. The Biden administration is trying to coordinate them. The Republicans and their allies, however, are acting like these "passports," or whatever they will be called, are "the stuff of totalitarian dictatorships" or "corporate communism." The "enemy" used to be the Democrats. The "enemy" now includes private enterprise.

The liberals in the Democratic Party and the business wing of the Republican Party used to be at loggerheads, always over taxes and regulation, but with a GOP almost fully radicalized, they may find more in common than they have in the past. Even the fascists may yet find a reason in time to back away from the edge—the reason being money, of course. Though he voted against Biden's nearly $2 trillion covid relief-stimulus bill, US Rep. Madison Cawthorn, who is as close to as Nazi as they come, could not help taking credit for the millions pouring in his district in North Carolina. He said he's "proud to see tax-payer dollars returned to NC-11"! Imagine how fast these frauds will run after the president's $4 trillion jobs-and-recovery agenda.