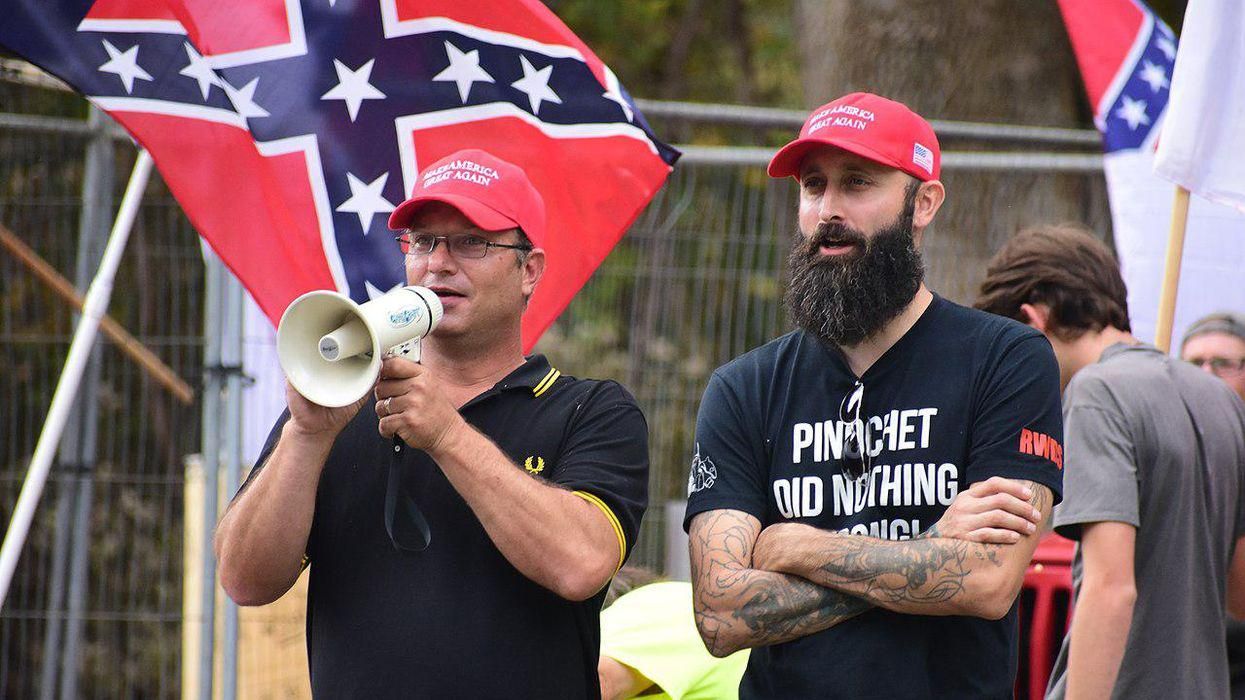 www.alternet.org
Trump will go down as a total failure': The Proud Boys are in ...
Meaghan Ellis
March 20, 2021

Long before the insurrection on the U.S. Capitol, Charles Donohoe, leader of the Proud Boys' North Carolina chapter, was sharing posts via Telegram about the need to push back against Telegram.

"We need to stop fighting Antifa in the streets where the cops are and start fighting them in bars and alleys," Donohoe wrote back in 2019. "We need to stomp them. We need to ruin their lives physically like they have ruined ours financially with doxxing. We need to rack up their hospital bills. We need to use special operations tactics and lightning strike them."

According to The Daily Beast, his previous profile photo on the encrypted social network featured him shaking hands with a member of the D.C. Metropolitan Police, later identified as Collin Cole, a Black police officer who served in the Marines with Donohoe.

In a Facebook post around that time, Donohoe spoke of counterprotests scheduled to take place in Downtown D.C. He tagged Cole, who responded to the post by saying, "I'll be working downtown today for the protests."

Donohoe replied to the officer saying, "You'll see me me [sic] I'm with the proud boys. Don't publicly announce this please Antifa is trying to ruin our weekend." To which, Cole responded: "Of course not! I'll keep an eye out."

In the wake of Donohoe's recent arrest for his alleged participation in the Capitol riots, the New York Times did a bit of research to learn more about the Proud Boys leader. The publication reported that he and quite a few others have ties to law enforcement. When the Daily Beast reached out to Cole for comment, he claimed that he was not aware of Donohoe's arrest only saying, "Wow. Wow. Wow. I do not want to be associated with that."

He also claimed he had no knowledge of the far-right groups Donohoe spoke of when he'd tagged him to his previous posts. "I guess he was just warning me like, 'Be careful, Antifa's attacking,' but it wasn't anything past that," Cole said.

According to the Philadelphia Inquirer, Rehl—described as one of the far-right organization's "most visible representatives on the East Coast"— has family ties to the police department. Last summer, Rehl was also seen "mingling with officers at the Philadelphia police union hall."

Previous reports also suggest Rehl has strong ties to the police department. Following a rally back in September, the Daily Beast noted that the "Philadelphia Proud Boys were accompanied back to their cars by a police caravan. A Philadelphia Police officer was filmed talking to and shaking hands with the group in what the city's district attorney described to The Daily Beast as an "extra-friendly" interaction."

The group's connections with law enforcement raise a number of questions about their ties. Currently, Philadelphia Police detective Jennifer Gugger is also at the center of an internal department investigation for her alleged attendance of former President Donald Trump's rally that preceded the deadly Capitol riots.

The latest reports come as Donohoe, Rhel, and a number of other Proud Boys members face charges for the insurrection on the U.S. Capitol. On Wednesday, March 17, Donohoe was arrested and charged with conspiracy for his alleged involvement in the U.S. Capitol riots.