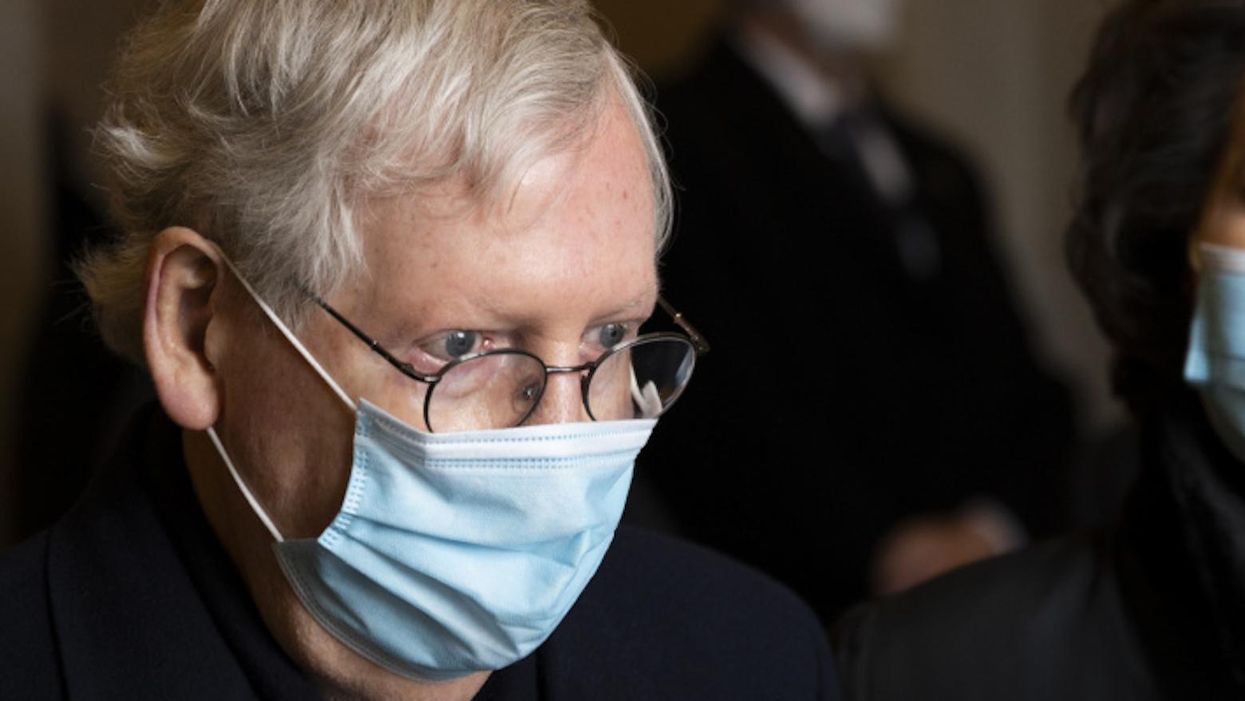 For those of us who have things to do other than pay attention to politics, Mitch McConnell is probably best known for one thing: the United States Supreme Court. Specifically, the Senate minority leader is best known for smashing the rules and norms that normally would have prevented his party from placing two extra justices on the court but didn't, thanks to his cynical and cold-blooded willingness to smash them.

His success in this regard has won him praise from his party, obviously, but also from respectable people who admire explicit or even ostentatious demonstrations of power. The press corps in Washington, for instance, habitually describes him as a "master tactician" whose knowledge of procedure knows no rival. Fact is, McConnell has only been as effective as his GOP conference allows him to be. That's the way of things in the United States Senate. Those of us who pay attention to politics despite there being other things to do understand quite well that McConnell's reputation is overrated.

This, however, was not apparent until Tuesday. That's when McConnell issued his second warning in a month that there will be hell to pay if the Democratic majority vaporizes the filibuster. The filibuster is a Senate rule requiring most pieces of legislation to attract 60 votes, a supermajority, instead of the simple majority that governs the House of Representatives. The filibuster is not in the US Constitution. It has not always been in place. When it has been, it has changed over time. Most importantly, to McConnell anyway, is that the filibuster has been key to his success, which is another way of saying his success can be reduced to procedural obstruction.

If the Democrats get rid of the filibuster, McConnell said Tuesday on the Senate floor, his conference is prepared to create a "scorched-earth Senate."

"This is an institution that requires unanimous consent to turn the lights on before noon, to proceed with a garden-variety floor speech, to dispense with the reading of a lengthy legislative text, to schedule committee business, to move even non-controversial nominees at anything besides a snail's pace," he said. This is, to put it bluntly, extortion. He's threatening to block everything if the Democrats take away his favorite tool for blocking anything.

Given McConnell's reputation as the "Master of the Senate," these warnings might appear quite meaningful. They are not. For one thing, rules exploited to punish the majority for changing the rules can themselves be changed—by the majority. For another, pretty much everything on his wish-list is deadly unpopular. Even if the Senate managed to pass them, they'd be vetoed by a president who won't let them see the light of day.1 Lastly, and most importantly, McConnell acquitted Donald Trump of the charge of treason—twice. He can take his extortion and stuff his ass with it.

Truth is, McConnell can't stop what's coming. Joe Biden went on ABC News last night to talk about his legislative agenda, which has no chance of becoming reality as long as the filibuster remains in place while the Senate is split 50-50. The president said he favors "reforming" the supermajority rule so that it's harder to implement. By that, he meant forcing Senators to talk a bill to death rather than silently kill it. It's important to point out that this is exactly what Joe Manchin has said he favors. The conservative Democratic senator from West Virginia does not want to be seen as nuking the rule but also does not want it to obstruct Biden. A "talking filibuster" is his third way.2 With Manchin mollified, McConnell won't have any way of stopping the Democrats.

It didn't have to be this way—and it might not have been this way had Mitch McConnell lived up to his reputation as a master tactician. Think about it. If you don't want the majority to emasculate you, and you don't have a tool for stopping the majority from emasculating you, there's only one thing to do: stop giving the majority reasons for emasculating you. Mitch McConnell could have vowed not to abuse the filibuster, as he has so many times before, in the hope that the Democrats don't take it away. Instead, he vowed to block everything if the Democrats take away his favorite tool for blocking everything. I can't imagine Nancy Pelosi doing something so dumb.

Of course, this is the man who stole a Supreme Court seat before looking the other way while the Russians sabotaged a Democratic presidential candidate. This same man rammed through another Supreme Court justice by breaking the rule he totally made up to prevent a former Democratic president from naming a Supreme Court justice. To prevent the Democrats from nuking the filibuster, he would have to keep his promise not to abuse it, but honestly, after all this time, why would the Democrats trust him?