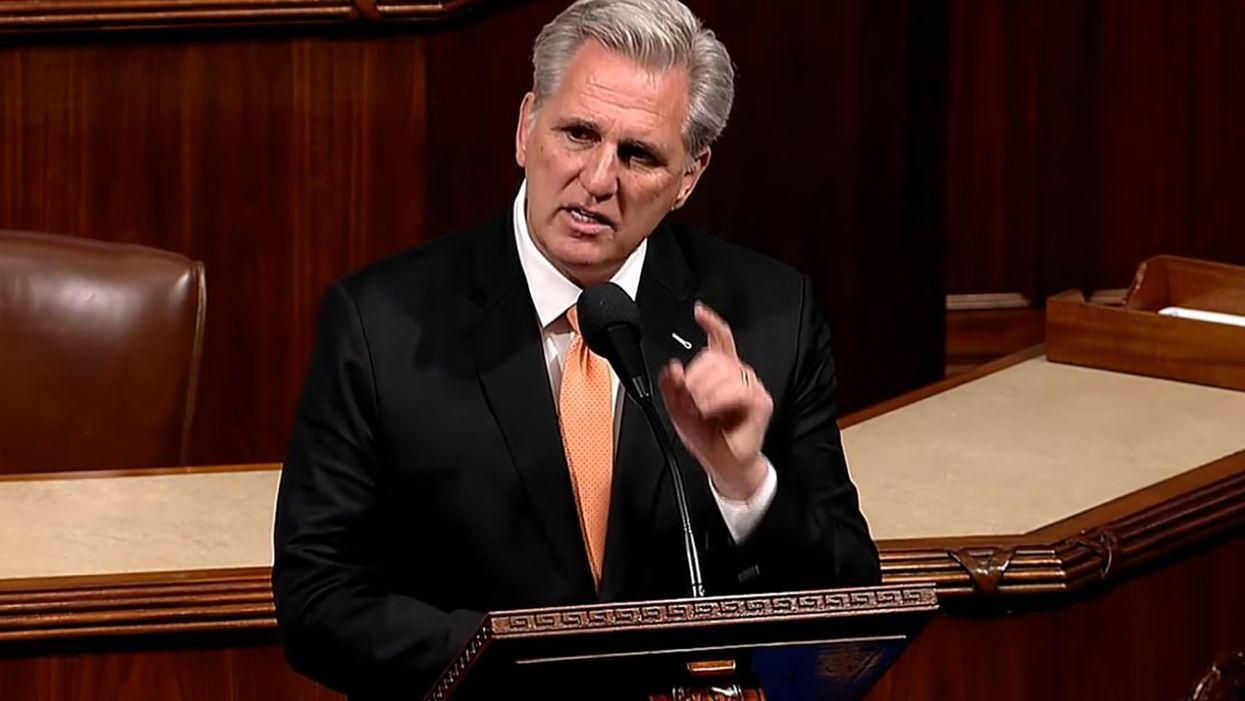 After speaking with border patrol agents on Monday, March 15, House Minority Leader Kevin McCarthy (R-Calif.) claimed there was a dire warning about "suspected terrorists" trying to make their way into the United States from Mexico.

Referring to the border patrol agents, McCarthy claimed, "You saw it in their eyes. They talked about, 'They're on the list.' … The terrorist watch list." He also took aim at President Joe Biden claiming the "crisis" at the border has been influenced by his administration's policies.

What's happening at the border is more than a crisis. This is human heartbreak. And it was created by the policie… https://t.co/uwrPHJHdKJ
— Kevin McCarthy (@Kevin McCarthy)1615845399.0

McCarthy also stated that agents "told him individuals from as far away as China with links to the terrorism watch list had recently been captured crossing the border," according to The Washington Post.

"We asked them what countries are people coming from," McCarthy said to reporters. "Yemen, Iran, Sri Lanka, that's what's coming across. They even talked about Chinese, as well."

Another Republican lawmaker also echoed similar sentiments based on McCarthy's seemingly unfounded claim. The California lawmaker's disturbing remarks come as the Republican Party aims to shed light on the influx of migrants; an issue the Biden administration is having to contend with.

While other Republican lawmakers echoed claims similar to McCarthy's, Democrats are pushing back against the Republican lawmaker's claims insisting it's a far-fetched stretch of the truth. In addition to criticizing McCarthy, they are also demanding solid evidence to back the claims.

Almost immediately after McCarthy shared footage of his Fox News interview, which featured his controversial claims, Twitter users sounded off.

In a tweet, Rep. Ruben Gallego (D-Phoenix, Ariz.) said, "Weird as the Chairman of the subcommittee on Intelligence and Special Operations and a border state member of Congress haven't heard anything about this. Gonna ask for a briefing. Pretty sure he is either wrong or lying."

Twitter users have also fired back at McCarthy. In fact, one user wrote, "FYI: Kevin McCarthy is manufacturing crises and outrage, in order to distract from the fact that the GOP voted against the incredibly popular Covid relief bill."

Another person wrote, "And Kevin, why do we have this problem? The previous guy. Those policies created the surge of people who have been living in Mexico waiting and these kids wanting to get into the U.S. with a more compassionate administration - a word you have no comprehension of. STOP LYING."

@therecount @GOPLeader And Kevin, why do we have this problem? The previous guy. Those policies created the surge o… https://t.co/AhaJn9pIj3
— JEFSantamonica 😷 (@JEFSantamonica 😷)1615843379.0

@therecount @GOPLeader Kevin McQanon seems to forget Trump did this 4 yrs ago to these human beings. The shit at th… https://t.co/oxslzeXlTX
— Robin Steele (@Robin Steele)1615851003.0

Gallego also demanded more information as he raised questions about McCarthy's claims. "I have have the same security clearance as you do," Gallego said to McCarthy in a tweet. "Can you have your office arrange for a classified briefing for members to see where this info derived from?"

As of Wednesday, March 16, McCarthy has yet to respond to that request.