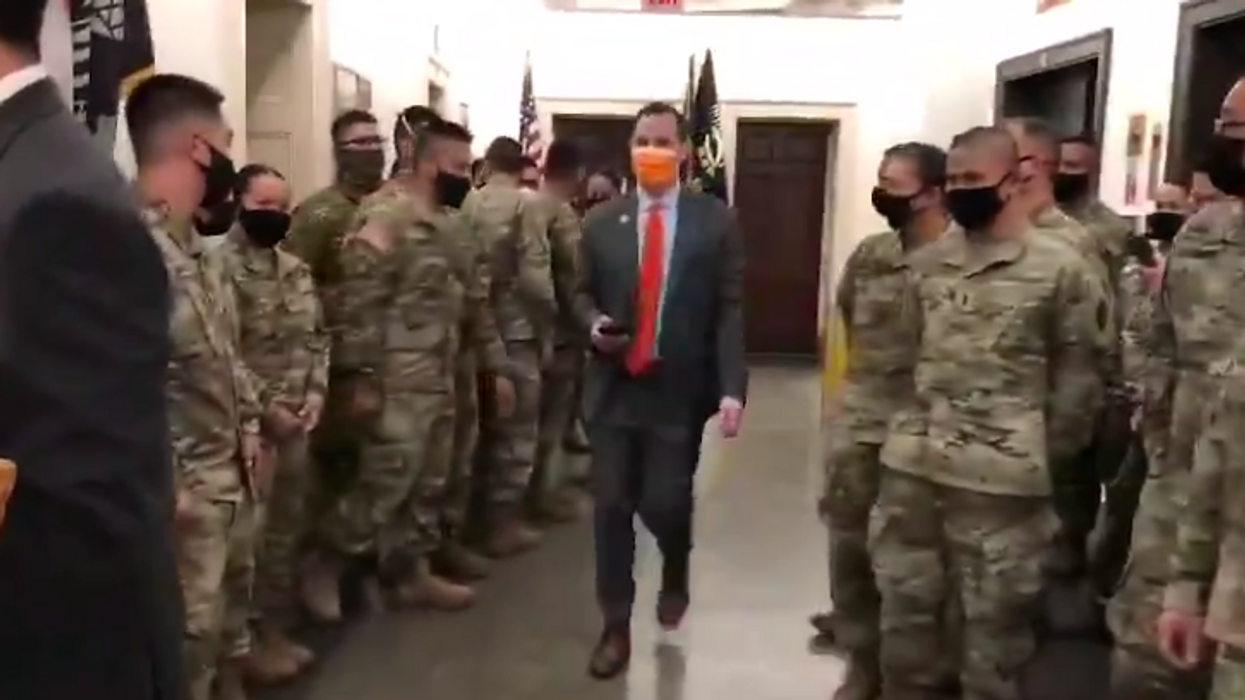 Rep. Marjorie Taylor Greene of Georgia has faced one controversy after another during her time in Congress, and the far-right Republican recently offended residents of the U.S. territory of Guam by incorrectly describing it as a foreign country. Some Guam National Guard troops responded this week by visiting Greene's office to give her some cookies, and they were led by Democrat Michael F.Q. San Nicolas — a Guam delegate to the U.S. House of Representatives.

"It is unclear whether any military rules were broken, and it does not appear that any of the soldiers involved will face disciplinary action," Military.com reporter Steve Beynon explains. "Maj. Gen. Esther J.C. Aguigui, adjutant general of the Guam National Guard, said she appreciated Nicolas' efforts to represent Guam's culture on Capitol Hill."

Aguigui issued an official statement, saying, "We thank Congresswoman Greene for ultimately helping raise awareness of Guamanians as citizens of the United States, and our rich tradition of service and sacrifice to our nation. As a non-partisan entity, the Guam National Guard is here to continue this legacy of supporting and defending the Constitution of the United States and the freedoms it provides."

It was at the recent 2021 Political Action Conference, which was held in Orlando, Florida this year, that Greene made her controversial remarks about Guam. The congresswoman, known for supporting the QAnon conspiracy cult, told the crowd, "We love our country. We believe our hard-earned tax dollars should just go for America, not for what? China, Russia, the Middle East, Guam, whatever, wherever,"

Beynon notes that National Guard troops, according to Defense Department Directive 1344.10, are forbidden to take part in partisan political activities while in uniform.

"Service members are allowed to engage in virtually any political activity out of uniform, but the activity cannot be perceived as being endorsed by the military," Beynon observes. "It is unclear whether Monday's event violated any of those rules. No soldier in the video advocated for any political action, and simply meeting with a member of Congress in uniform is not against any military policy."

Greene wasn't in her office when the Guam National Guard troops stopped by, but she later used the visit as an excuse to attack Democrats.

In a statement, the pro-QAnon congresswoman said, "It's time for our great men and women of the National Guard to go home and be with their families. The Democrats need to stop using them as political theatre and drama on Capitol Hill. Shame on Democrats for disrespecting our military."