The GOP's rhetoric of violence has given Biden little choice 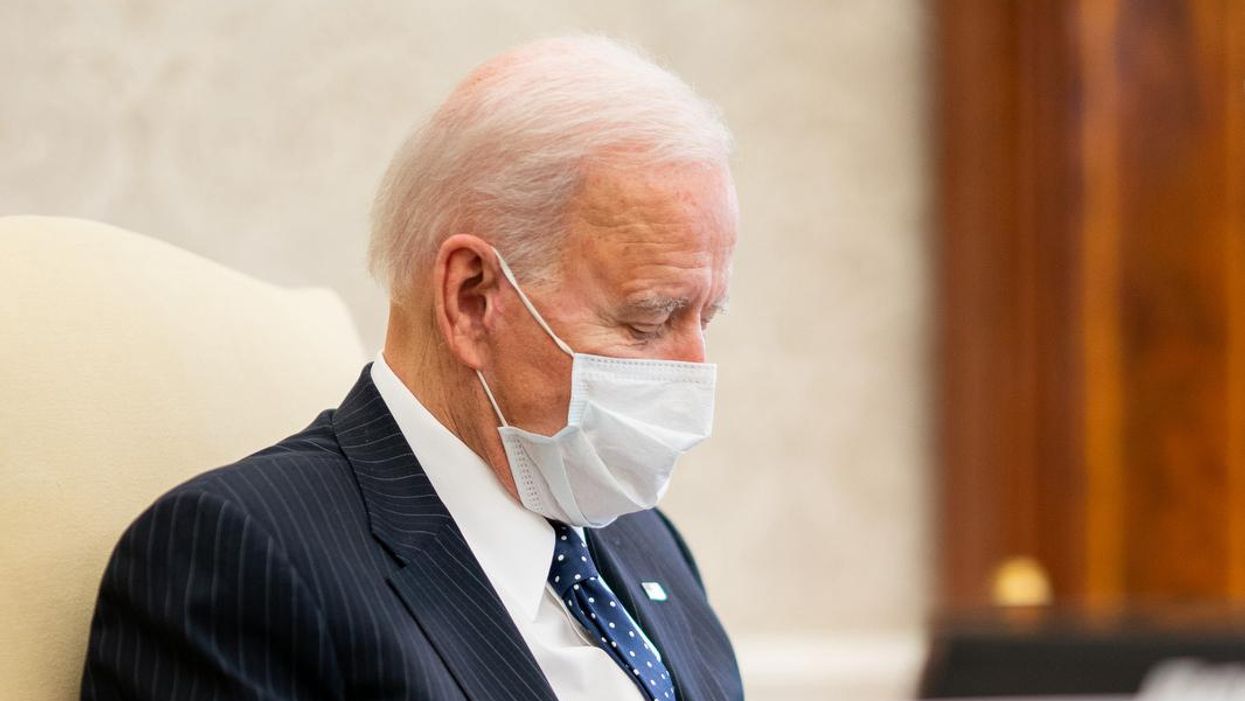 President Joe Biden looks down at his notes during a meeting to discuss the reopening of schools with the Director of the Centers for Disease Control and Prevention Dr. Rochelle Walensky Tuesday, Feb. 9, 2021, in the Oval Office of the White House. (Official White House Photo by Adam Schultz)
John Stoehr
March 19, 2021

My friend Greg Sargent and I do not coordinate with each other. But somehow, the Post columnist and I often end up in a similar place. I wrote Thursday there's a good reason why President Joe Biden governs as if the "cultural left" has gone mainstream. It's because the "cultural left" has gone mainstream. In comparison to a Republican Party given over almost totally to its id, demands for equality in policing or rights for trans people seem not only sensible, not only acceptable, but downright all-American.

In his blog, "The Plum Line," Greg wrote Thursday that the president and Democratic leaders in the Congress are working with leftists "on a variety of fronts, and while complications, challenges and future divisions loom, it's all unfolding more smoothly than you might have expected." This might be unexpected, but it's happening, much to the chagrin, Greg wrote, of the Republicans who said "Democratic rule would run the country into the ground precisely because Democrats would prove wholly captive to their crazy socialist left flank." This, Greg said, exposes one of Trumpism's lies.

Part of this is because everything Biden touches turns into "the new reasonable," as Andrew Yang pointed out after his short-lived run for president. But part of this, I think, is because the Republicans have turned their back on democracy. That is not news. Controlling anti-majoritarian institutions has been their aim for a long time. Voter suppression is also understood. What is news, perhaps, is the role of implicit and explicit violence. The Trump years may have galvanized the view that violence, or the threat of violence, is the point of GOP politics. If they were devoted to the republic, and to the democratic faith, violence would never be an option. But we know it is.

Violence, or the threat of violence, is the subtext of virtually all Republican rhetoric. It is perhaps most visible in the little things. Consider when the president said he hoped to see enough Americans inoculated against the covid by the Fourth of July so that they can safely enjoy backyard cookouts. Ted Cruz posted on Twitter an image of a grill with a cut on meat on it. On the image: "Come and take it." This is an implied threat of violence. Cruz is intimating what the consequences will be if the federal government tried preventing Texans for grilling their God-given chops and steaks.

This is not empty rhetoric. It is a meaningful form of communication to certain individuals and groups in this country who are highly attuned to implicit and explicit threats of violence against those are "deserving" of it, and who are themselves not necessarily part of any formal organization affiliated with either major party.

Donald Trump's attempted coup d'etat, however, is only the most obvious example of the political violence I'm talking about. I would argue that most shooting massacres that we have witnessed since the assault weapons ban expired in 2004—Sandy Hook, Charleston, El Paso, Parkland, and now Atlanta—are in ways large and small a reflection of this violent impulse to stop whatever it is that democracy is producing, and that cannot be stopped through normal, legitimate and non-violent means. I would also argue that the Republicans knew instinctively what they were doing when they scorched the earth to prevent democracy from putting a stop to the violence. They have created conditions in which domestic terrorism is now a normal part of life.

When a party habitually speaks the rhetoric of violence, when it encourages violent reactions to the legitimate outcomes of democracy, when it cultivates ties to white-power vigilante groups dedicated to warring against the federal government, when it stands against democratic solutions to domestic terrorism—when all this is the case, the opposing party must not engage, because to do so is to invite sabotage or worse. Whatever Biden touches turns into "the new reasonable." Trumpism's big lie is being exposed. But I think a major reason the president is building bridges to his left, instead of to his right, as Democratic presidents usually do, is because he must.