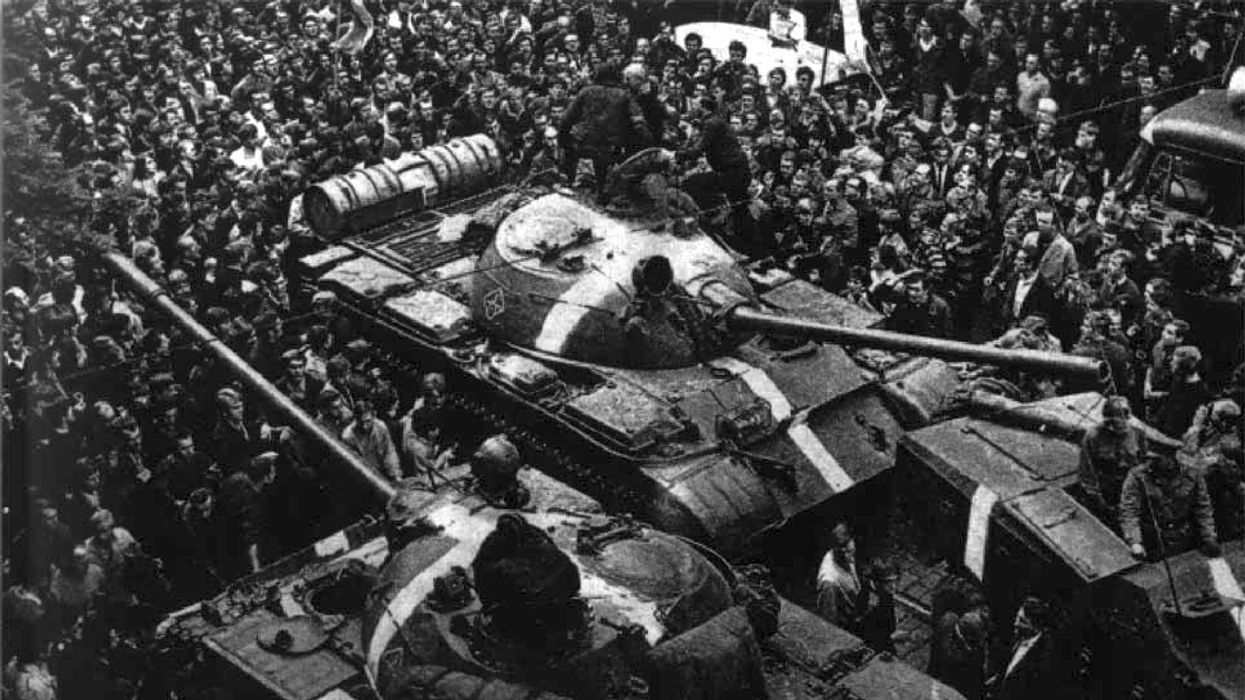 A crowd of protesters surrounding Soviet tanks in Prague in 1968 during the Prague Spring, Engramma.it
Alex Henderson
March 10, 2021

In the post-communist Czech Republic, Tomáš Klvaňa is known for his years as a policy adviser to former President Václav Klaus — and Klvaňa, a Gen-Xer who born in Prague in 1966, is old enough to remember Czechoslovakia's communist government of the 1970s and 1980s. Klvaňa analyzes the state of the United States' Trumpified Republican Party and its right-wing media in an article published by the conservative website The Bulwark on March 10, explaining why they remind him so much of the communists who ruled Czechoslovakia during his youth.

"When, in the early 1990s, I first arrived in Washington, D.C. as a student from the newly free Czechoslovakia, the Republican Party was a beacon of hope," Klvaňa writes. "It largely understood the importance of a strong American role in the world. I became an honorary Republican."

But 30 years later, Klvaňa has a very different view of the Trumpified version of the GOP.

"A significant portion of U.S. politics and media slid down the sewage to be as bad as ours were back then," Klvaňa laments. "The sorry state of American politics is not due solely to Republicans, but they are by far the more responsible party. It is frankly astonishing how closely today's GOP resembles in mentality the Communist Party of my youth, right down to Donald Trump's brownnosing to Moscow. It is incredible to see Fox News, let alone Newsmax and OANN, use the same methods as Czechoslovak TV and Rudé Právo, Red Right, the official Communist paper, in the 1980s."

My piece in The Bulwark on the shocking similarities between the Communists and Republicans, and where it all start… https://t.co/1GfNb8kNeO
— Tomáš Klvaňa (@Tomáš Klvaňa) 1615373414.0

"Quoting out of context has become normalized for the GOP propaganda machine on Fox, Newsmax and elsewhere," Klvaňa explains. "Lying about democracy, a mainstay of the old Communist press, has also become standard for American media outlets aligned with Trump's GOP — as witness the months of lies about the 'stolen election,' for which there is no evidence."

Fox News has seriously downplayed the horrors of January 6, when a violent mob of pro-Trump extremists attacked the U.S. Capitol Building in the hope of preventing Congress from certifying now-President Joe Biden's Electoral College victory. And downplaying something of that magnitude, Klvaňa notes, is exactly the type of thing the Czech Communist Party's media allies did back in the day.

"Watching Fox and its competitors, one is rarely confronted with the reality of the January 6 insurrection in its full scale and moral ugliness, as that which does not conform to the party line does not exist," Klvaňa writes. "After all, it is a well-known fact that there were no airplane crashes or train wrecks in communism, since the media did not report on them."

The vehemently anti-communist Klvaňa has some interesting observations about Democratic presidents and how they are depicted in the United States' right-wing media. Far-right wingnuts pundits have smeared President Bill Clinton and President Barack Obama as "far-left socialists"; Klvaňa, in contrast, describes Clinton as being "as crystal-clear a centrist as there ever was" and Obama as "a mild-mannered center-left liberal."

"In democratic politics, there is no last stand," Klvaňa writes. "There is only a struggle, a peaceful one, between competing ideas, policies, and visions of the future. It is a struggle that never ends. And friends of democracy should be wary of rhetoric that casts peacetime politics in existential, ultimate, and decisively final terms."