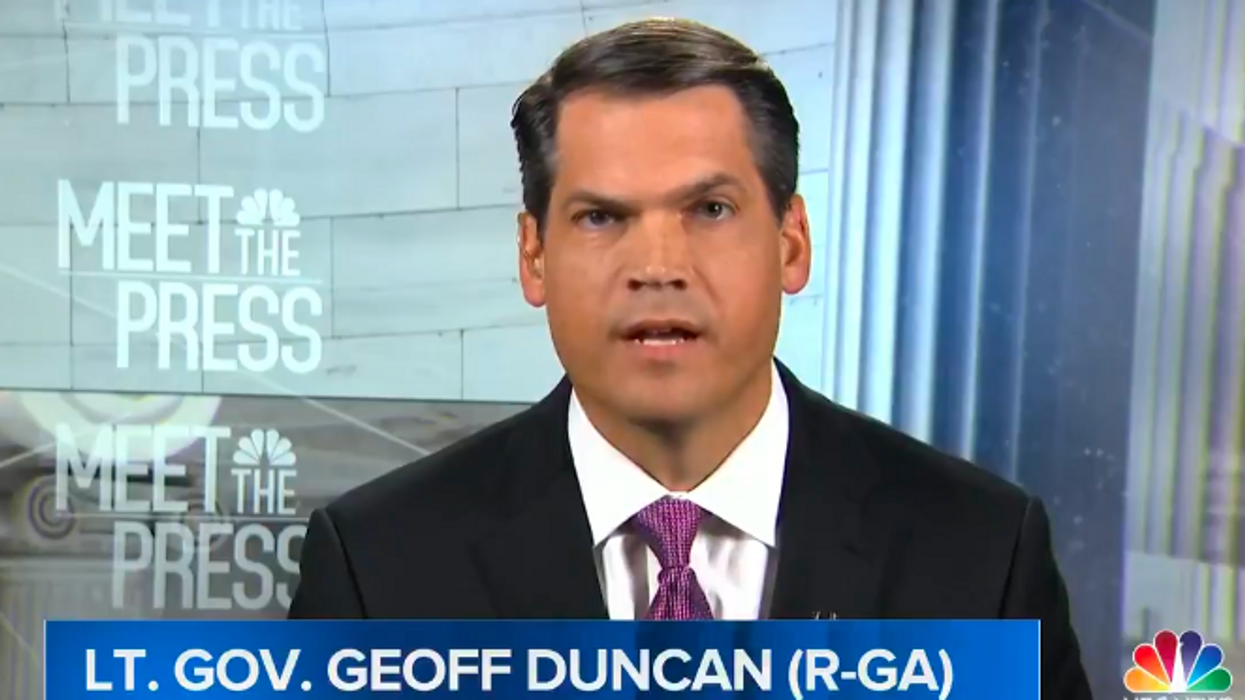 Both Georgia business leaders and top Republican officials in the state are opposing proposed legislation to restrict voting rights after the GOP suffered a well-earned triple loss in state Senate runoffs as well as the presidential election. In response, the state House passed House Bill 531 on March 1 and in doing so, threatens to add a voter ID requirement to the absentee voting process, limit the use of drop boxes, and force counties to choose between opening polls on Saturdays or Sundays, according to 11 Alive. Senate Bill 241 tacks on banning no-excuse absentee voting, which has been a legal right in Georgia since 2005.

Georgia Lt. Gov. Geoff Duncan, a Republican, parted ways with his party on the changes and called them "solutions in search of a problem" in a Meet the Press interview on Sunday. He also called the voting rights restrictions a "knee-jerk reaction to an election that, quite honestly, didn't work out our way."

"Republicans don't need election reform to win," he said in the interview. "We need leadership. I think there's millions of Republicans waking up around the country that are realizing that Donald Trump's divisive tone and strategy is unwinnable in forward-looking elections.

"We need real leadership, we need new focus, a GOP 2.0 that includes moderates in the middle, to get us to the next election cycle."

The Georgia Chamber of Commerce also opposed restrictive aspects of both House Bill 531 and Senate Bill 241. "We have expressed concern and opposition to provisions found in both HB 531 and SB 241 that restrict or diminish voter access," the chamber said in a statement the news site Popular Information obtained. "As these two omnibus bills move through the legislative process, we will continue to work on ensuring both accessibility and security within our voting system."

"And so the only connection that we can find is that more people of color voted and it changed the outcome of elections in the direction Republicans do not like," Abrams said. She called the attack on voting rights "racist" and "a redux of Jim Crow in a suit and tie."

Democratic state Sen. David Lucas similarly described the effort on the floor of the Georgia Senate. In the presidential election of 1876 between Democratic candidate Samuel Tilden and former Republican President Rutherford Hayes, the Republican promised to pull federal troops out of the last remaining Confederate state where they were deployed simply to win the election, Lucas said. Hayes sacrificed safety and the voting rights of Black southerners for political gain. "And that's when we had Jim Crow, and folks got lynched," Lucas said. The comparison between the 1876 election and present-day Georgia politics is obvious. "Now I would be negligent in my duties representing the 26th senatorial district to go for this malarkey," Lucas said.