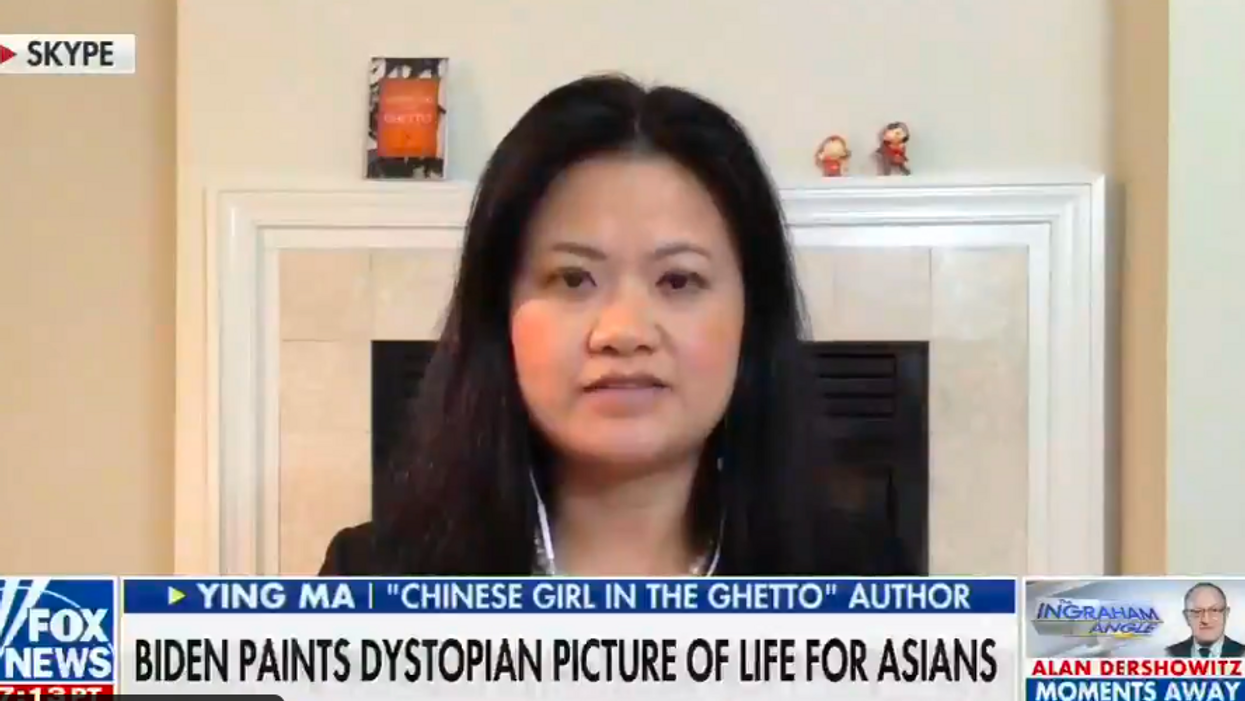 Ying Ma is a conservative Chinese American who's been appearing on Fox lately to hype her theory that liberals only became interested in anti-Asian violence when they could use it to smear Donald Trump—who, frankly, doesn't really need anyone to smear him as it's already impossible to suss out where the slime ends and the human genome begins.

Oh, and she also thinks all Chinese Americans need to denounce the Chinese communist government over its failure to stop the novel coronavirus because, you know, that's their country, right?

Most of my immediate ancestors were Germans who came to this country in the 1860s and '70s following the Great Cinnamon Strudel and Kartoffelpuffer Famine of 1862.

Actually, I have no idea why the fuck they came here. It couldn't possibly be because they envisioned that glorious future day when one of their descendants would spend literally hours perched atop a nascent sofa sinkhole drinking Mountain Dew Baja Blast and mercilessly mowing down Nazis in Call of Duty.

The point is, it was a long time ago, and my parents and grandparents never knew any other home than America—and so they were solidly on our side during World War II. So I would have found it more than a little odd if, growing up, I'd been repeatedly asked to denounce 1930s and 1940s German war atrocities just because I was a white descendant of northern Europeans.

But this is the kind of shit people of color are continually asked to do, at least on Fox News.

"encourage all Chinese-Americans to come out and denounce China for the role that it has played in infecting the wo… https://t.co/opgWKzMDvD
— Brendan Karet 🚮 (@Brendan Karet 🚮)1616206962.0

MA: "There are two things that the Biden administration can do. One is to send Kamala Harris to Oakland, which is the city where she declared her candidacy for president, and ask her to actually just denounce, loud and clear, Black-on-Asian violence. The Oakland-San Francisco area is a place where Black-on-Asian violence has occurred repeatedly, and it's also the place where some of the most horrific attacks we've seen this year have occurred. The second thing is actually to encourage all Chinese Americans to come out and denounce China for the role that it has played in infecting the world with COVID-19, and along with that the Biden administration needs to be very firm in holding China accountable for having done this to America and having done this to the world."

Hmm, this sure does sound familiar, huh? Where have I seen this kind of rhetoric before?

Yup. As Chris Hayes points out in the above tweet, this is precisely the kind of thing conservatives said about Muslims in the wake of the 9/11 terrorist attacks. WHY AREN'T THEY DENOUNCING THESE TERRORISTS? As if American Muslims as a community somehow had a hand in the murderous plot against their own country.

Hey, Fox News! I'm also an eighth Norwegian. Do I need to apologize the next time someone power-vomits lutefisk on Christmas Eve? Eventually coronavirus will be gone, but no one who's eaten lutefisk ever forgets that horror show.

No, I won't and can't apologize, because it doesn't have shit to do with me.

Then again, no one has ever asked me to do anything this ridiculous. Nobody's asked me, a white guy, to denounce the events of Jan. 6, either.

Why is that, I wonder?
From Your Site Articles
Report typos and corrections to: feedback@alternet.org.
#story_page_post_article