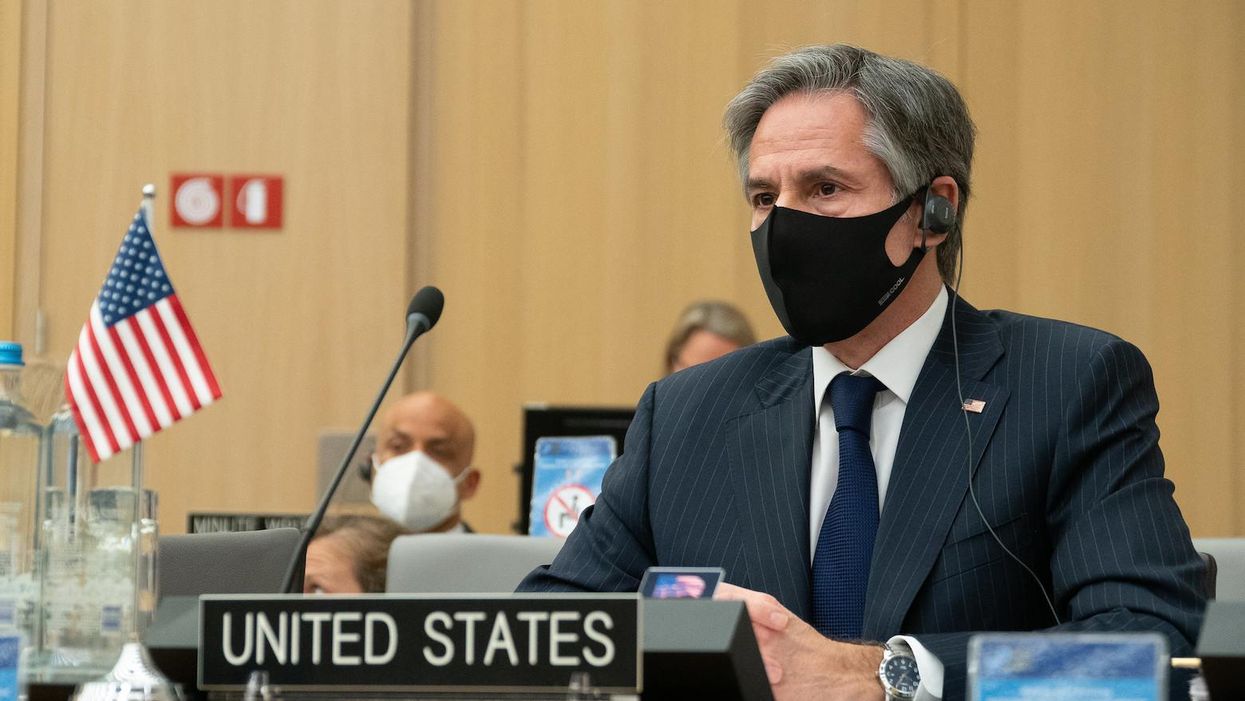 On March 18, the world was treated to the spectacle of U.S. Secretary of State Antony Blinken sternly lecturing senior Chinese officials about the need for China to respect a "rules-based order." The alternative, Blinken warned, is a world in which might makes right, and "that would be a far more violent and unstable world for all of us."

Blinken was clearly speaking from experience. Since the United States dispensed with the UN Charter and the rule of international law to invade Kosovo, Afghanistan and Iraq, and has used military force and unilateral economic sanctions against many other countries, it has indeed made the world more deadly, violent and chaotic.

When the UN Security Council refused to give its blessing to U.S. aggression against Iraq in 2003, President Bush publicly threatened the UN with "irrelevance." He later appointed John Bolton as UN Ambassador, a man who famously once said that, if the UN building in New York "lost 10 stories, it wouldn't make a bit of difference."

But after two decades of unilateral U.S. foreign policy in which the United States has systematically ignored and violated international law, leaving widespread death, violence and chaos in its wake, U.S. foreign policy may finally be coming full circle, at least in the case of Afghanistan.

Secretary Blinken has taken the previously unthinkable step of calling on the United Nations to lead negotiations for a ceasefire and political transition in Afghanistan, relinquishing the U.S.'s monopoly as the sole mediator between the Kabul government and the Taliban.

So, after 20 years of war and lawlessness, is the United States finally ready to give the "rules-based order" a chance to prevail over U.S. unilateralism and "might makes right," instead of just using it as a verbal cudgel to browbeat its enemies?

Biden and Blinken seem to have chosen America's endless war in Afghanistan as a test case, even as they resist rejoining Obama's nuclear agreement with Iran, jealously guard the United States' openly partisan role as the sole mediator between Israel and Palestine, maintain Trump's vicious economic sanctions, and continue America's systematic violations of international law against many other countries.

What's going on in Afghanistan?

In February 2020, the Trump administration signed an agreement with the Taliban to fully withdraw U.S. and NATO troops from Afghanistan by May 1, 2021.

The Taliban had refused to negotiate with the U.S.-backed government in Kabul until the U.S. and NATO withdrawal agreement was signed, but once that was done, the Afghan sides began peace talks in March 2020. Instead of agreeing to a full ceasefire during the talks, as the U.S. government wanted, the Taliban only agreed to a one-week "reduction in violence."

Despite the fighting, the Kabul government and the Taliban managed to exchange prisoners and continue negotiations in Qatar, mediated by U.S. envoy Zalmay Khalilzad, who had negotiated the U.S. withdrawal agreement with the Taliban. But the talks made slow progress, and now seem to have reached an impasse.

The coming of spring in Afghanistan usually brings an escalation in the war. Without a new ceasefire, a spring offensive would probably lead to more territorial gains for the Taliban—which already controls at least half of Afghanistan.

This prospect, combined with the May 1st withdrawal deadline for the remaining 3,500 U.S. and 7,000 other NATO troops, prompted Blinken's invitation to the United Nations to lead a more inclusive international peace process that will also involve India, Pakistan and the United States's traditional enemies, China, Russia and, most remarkably, Iran.

This process began with a conference on Afghanistan in Moscow on March 18-19, which brought together a 16-member delegation from the U.S.-backed Afghan government in Kabul and negotiators from the Taliban, along with U.S. envoy Khalilzad and representatives from the other countries.

The Moscow conference laid the groundwork for a larger UN-led conference to be held in Istanbul in April to map out a framework for a ceasefire, a political transition and a power-sharing agreement between the U.S.-backed government and the Taliban.

UN Secretary-General Antonio Guterres has appointed Jean Arnault to lead the negotiations for the UN. Arnault previously negotiated the end to the Guatemalan Civil War in the 1990s and the peace agreement between the government and the FARC in Colombia, and he was the Secretary-General's representative in Bolivia from the 2019 coup until a new election was held in 2020. Arnault also knows Afghanistan, having served in the UN Assistance Mission to Afghanistan from 2002 to 2006.

If the Istanbul conference results in an agreement between the Kabul government and the Taliban, U.S. troops could be home sometime in the coming months.

President Trump—belatedly trying to make good on his promise to end that endless war— deserves credit for beginning a full withdrawal of U.S. troops from Afghanistan. But a withdrawal without a comprehensive peace plan would not have ended the war. The UN-led peace process should give the people of Afghanistan a much better chance of a peaceful future than if U.S. forces left with the two sides still at war, and reduce the chances that the gains made by women over these years will be lost.

It took 17 years of war to bring the United States to the negotiating table and another two-and-a-half years before it was ready to step back and let the UN take the lead in peace negotiations.

For most of this time, the U.S. tried to maintain the illusion that it could eventually defeat the Taliban and "win" the war. But U.S. internal documents published by WikiLeaks and a stream of reports and investigations revealed that U.S. military and political leaders have known for a long time that they could not win. As General Stanley McChrystal put it, the best that U.S. forces could do in Afghanistan was to "muddle along."

What that meant in practice was dropping tens of thousands of bombs, day after day, year after year, and conducting thousands of night raids that, more often than not, killed, maimed or unjustly detained innocent civilians.

The death toll in Afghanistan is unknown. Most U.S. airstrikes and night raids take place in remote, mountainous areas where people have no contact with the UN human rights office in Kabul that investigates reports of civilian casualties.

Fiona Frazer, the UN's human rights chief in Afghanistan, admitted to the BBC in 2019 that "…more civilians are killed or injured in Afghanistan due to armed conflict than anywhere else on Earth….The published figures almost certainly do not reflect the true scale of harm."

No serious mortality study has been conducted since the U.S. invasion in 2001. Initiating a full accounting for the human cost of this war should be an integral part of UN envoy Arnault's job, and we should not be surprised if, like the Truth Commission he oversaw in Guatemala, it reveals a death toll that is ten or twenty times what we have been told.

If Blinken's diplomatic initiative succeeds in breaking this deadly cycle of "muddling along," and brings even relative peace to Afghanistan, that will establish a precedent and an exemplary alternative to the seemingly endless violence and chaos of America's post-9/11 wars in other countries.

The United States has used military force and economic sanctions to destroy, isolate or punish an ever-growing list of countries around the world, but it no longer has the power to defeat, re-stabilize and integrate these countries into its neocolonial empire, as it did at the height of its power after the Second World War. America's defeat in Vietnam was a historical turning point: the end of an age of Western military empires.

All the United States can achieve in the countries it is occupying or besieging today is to keep them in various states of poverty, violence and chaos—shattered fragments of empire adrift in the twenty-first century world.

U.S. military power and economic sanctions can temporarily prevent bombed or impoverished countries from fully recovering their sovereignty or benefiting from Chinese-led development projects like the Belt and Road Initiative, but America's leaders have no alternative development model to offer them.

The people of Iran, Cuba, North Korea and Venezuela have only to look at Afghanistan, Iraq, Haiti, Libya or Somalia to see where the pied piper of American regime change would lead them.

What is this all about?

Humanity faces truly serious challenges in this century, from the mass extinction of the natural world to the destruction of the life-affirming climate that has been the vital backdrop of human history, while nuclear mushroom clouds still threaten us all with civilization-ending destruction.

It is a sign of hope that Biden and Blinken are turning to legitimate, multilateral diplomacy in the case of Afghanistan, even if only because, after 20 years of war, they finally see diplomacy as a last resort.

But peace, diplomacy and international law should not be a last resort, to be tried only when Democrats and Republicans alike are finally forced to admit that no new form of force or coercion will work. Nor should they be a cynical way for American leaders to wash their hands of a thorny problem and offer it as a poisoned chalice for others to drink.

If the UN-led peace process Secretary Blinken has initiated succeeds and U.S. troops finally come home, Americans should not forget about Afghanistan in the coming months and years. We should pay attention to what happens there and learn from it. And we should support generous U.S. contributions to the humanitarian and development aid that the people of Afghanistan will need for many years to come.

This is how the international "rules-based system," which U.S. leaders love to talk about but routinely violate, is supposed to work, with the UN fulfilling its responsibility for peacemaking and individual countries overcoming their differences to support it.

Maybe cooperation over Afghanistan can even be a first step toward broader U.S. cooperation with China, Russia and Iran that will be essential if we are to solve the serious common challenges confronting us all.