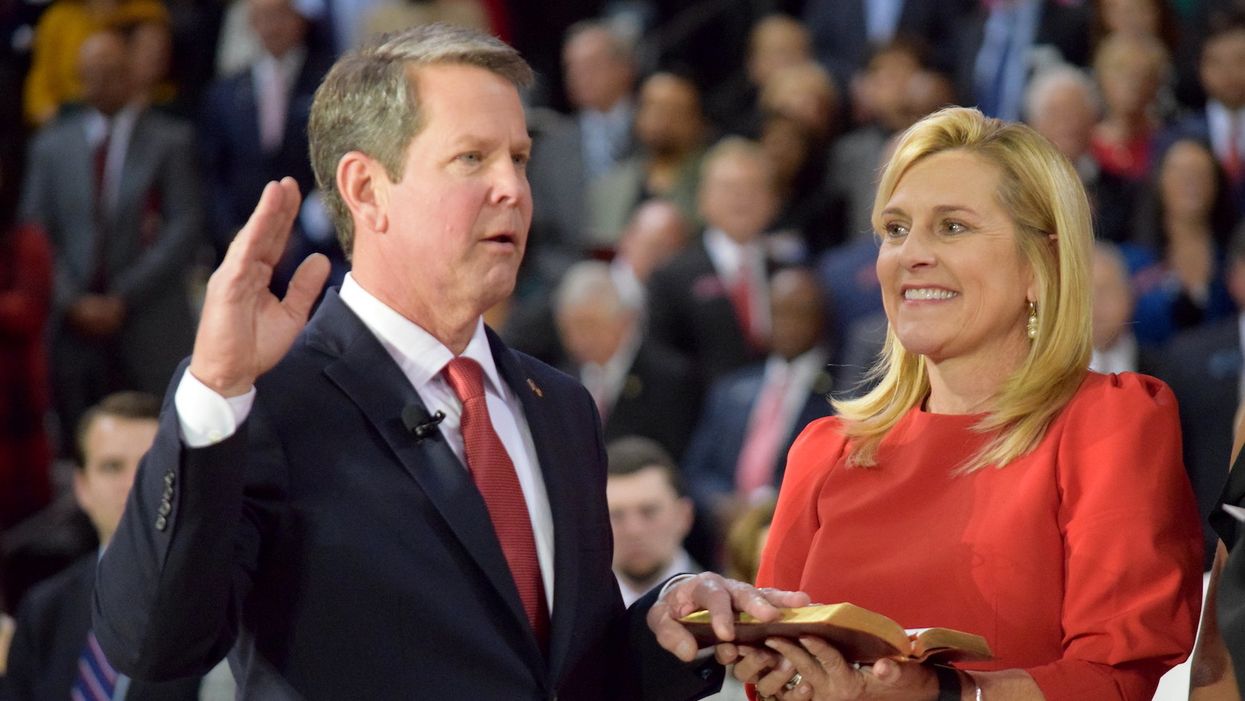 Brian Kemp takes the oath of office becoming the 83rd Governor of the state of Georgia Jan. 14, 2019 at the Georgia Institute of Technology. Following his inauguration, Governor Kemp; Maj. Gen. Joe Jarrard, Georgia’s Adjutant General and Department of Public Safety Commissioner Mark W. McDonough reviewed a formation of Georgia State Patrol Officers and Soldiers, Airmen and Ga, State Defense Force Volunteers. Georgia National Guard photo by Maj. William Carraway
Meaghan Ellis
March 10, 2021
In the weeks after the 2020 election was called for President Joe Biden, former President Donald Trump desperately sought to overturn the results, even asking Georgia Secretary of State Brad Raffensperger (R) to "find" him 11,870 votes prior to the Electoral College certification.
Republican election officials made it clear they were not willing to be part of Trump's attempted coup, but now that the election is over, an Atlanta Journal-Consitution op-ed is shedding light on how Trump's request underscores state lawmakers' latest efforts to shape future elections in their favor.

The author, Patricia Murphy, argues that Republican lawmakers could very well find Trump's 11,000 votes by "subtracting 11,000 Democrats." Murphy went on to discuss the political strategies Republican lawmakers are implementing to reach that goal as she highlighted the latest attack on voting in the state of Georgia: the newly-approved Senate Bill 241. A number of other proposed bills are also aimed at enforcing highly restrictive voting practices that threaten voting rights.

Murphy began by laying out the bill's attack on no-excuse absentee voting. The method was used by more than 1.3 million voters for the 2020 election, but Murphy says eliminating this particular measure could actually backfire on the Republican Party.

She noted, "Since the state does not register voters by party, there's no way to know how many of those people were Democrats or Republicans." She went on to discuss a number of scenarios that could be problematic for voters in future elections if Republicans manage to have their way.

"Could 11,000 Democrats across the state work in hourly jobs or have child care issues and find waiting in line to vote almost impossible? Yes."

Murphy went on to raise questions and concerns about the other proposed bills like the photo ID requirement.

"What about requiring a photo ID to request one of those absentee ballots? Murphy asked, adding, "During an earlier Senate debate, Sen. Larry Walker said 3% of Georgia voters lack the photo ID that would be necessary. Could 11,000 of those roughly 300,000 voters be Democrats and not complete the paperwork to apply for an ID to vote in the next election? Of course."

"How about the 2.7 million Georgians who voted early in person, which includes the estimated 65,000 who voted during the multiple Sundays of early voting in November? Could 11,000 of those voters be Democrats and find they can't get to the polls during the week, including Election Day? Absolutely."

Although Republican lawmakers believe their efforts are a step in the right direction, Murphy notes that Republican strategist are not sure these steps will lead to favorable outcomes for the political party.

"The most restrictive changes legislators are contemplating in Georgia are not based on data or evidence, but on the former president's accusations and GOP voters' suspicions," she wrote.

Despite the calls for voter reform, Murphy believes it could lead to the same results Americans witnessed during the 2020 election. She concluded saying, "There's no mistaking who is pushing to change the voting laws. And just as much as Republicans could be keeping 11,000 Democrats away from the polls, they could be activating many more for the first time."