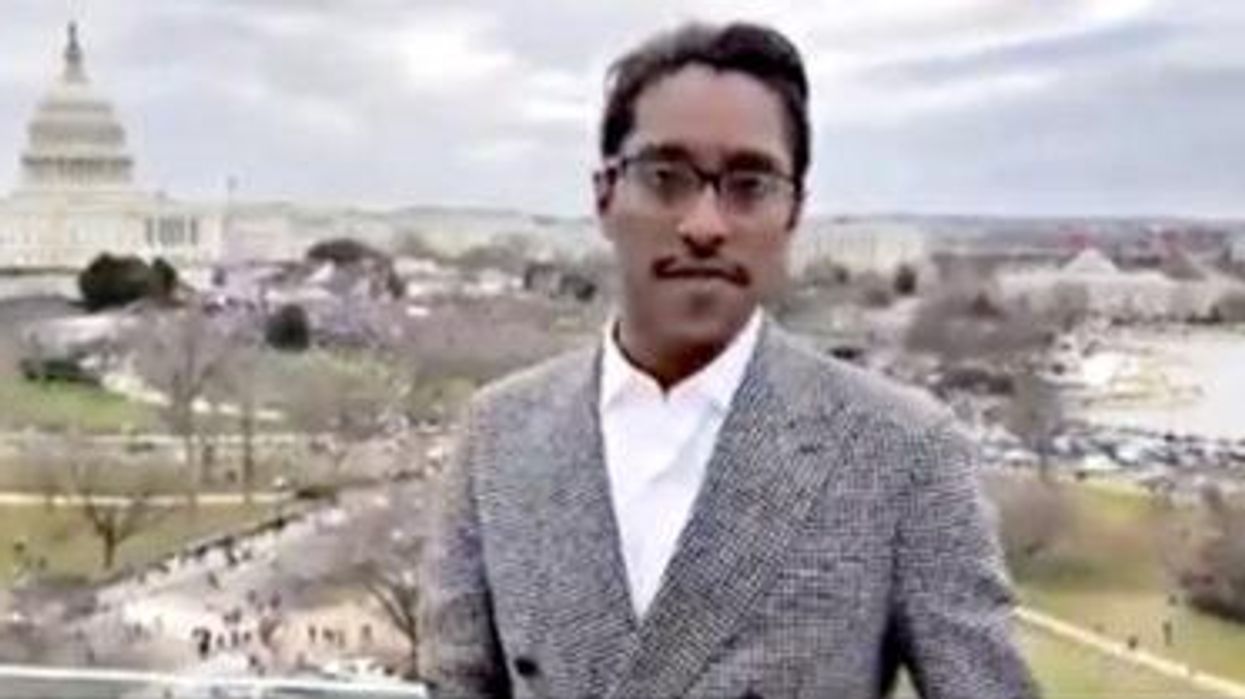 Ali Alexander, the lead organizer of the so-called Stop the Steal campaign, has resurfaced after going into hiding following the Jan. 6 insurrection at the U.S. Capitol. Streaming on Trovo Wednesday night, Alexander claimed that while he has been licking his wounds, he has been plotting to restart rallies in March, abolish the media, and build a separate society for Trump supporters.

As former President Donald Trump faces an impeachment trial this week for inciting an insurrection with his speech at the Stop the Steal rally the morning of Jan. 6, it appears Alexander has yet to face charges for his role. Alexander rebooted the so-called Stop the Steal campaign the day after Election Day, when Trump's lead began to slip as mail-in ballots began to be counted. He pushed voter fraud conspiracy theories, embraced QAnon conspiracy theorists and far-right activists in his campaign, claimed to be doing God's work, and organized three massive rallies in Washington, D.C., that featured the Proud Boys hate group, paramilitary groups like the Oath Keepers, and other extremists.

Following Jan. 6, Alexander was booted off most major social media platforms and, as a result, is now streaming on Trovo, a gaming platform that appears to be growing in popularity among far-right actors kicked off other platforms. On Wednesday night, Alexander lamented the “racist, bigoted, anti-Christian, anti-Southern, anti-Republican, anti-conservative, anti-human smear machine" that he says targeted him, and he promised to create chaos. “We've got to get back in the driver's seat," he added.

“They've done a great number on my life, they've cost me tens of thousands of dollars, they've really destroyed parts of my life, but in a lot of ways, I have no other choice but to announce that I'm building the future, so I'm making strategic investments in tools that fight deplatforming and to create chaos on existing platforms," Alexander claimed.

“America is going to have a choice, and I promise you that, between going onto this dystopian future or fighting in what I'm calling the American sovereignty movement," he said. “And I'm gonna get back, and I'm going to do rallies again starting in March, I'm gonna have indoor gatherings in March, in Michigan, in Arizona, in Georgia, in Texas. I'm going to do a media tour."

Alexander said he had been plotting how to do away with the free press and other “systems that control us": “So I want you guys to know that I've been licking my wounds, but I've been plotting, I've been planning, I've been scheming because we have to do away with this whole system. The free press is not free, and they're not the press, they need to be abolished. The systems that control us have to be abolished."

Alexander also didn't miss the opportunity to push the claim that the insurrection was a “premeditated psyop."

“Like everyone is saying the impeachment trial is proving that there was a premeditated psyop against both Trump and Stop the Steal, so how could we incite an insurrection that was premeditated by people we don't know?" he said. “And yet, are there big platforms welcoming me back saying we treated a Black man wrong because we wanted to pretend he was leading a white supremacy movement? No. These people are evil. And we will make lists of them, and they will not be welcome in this new society, they won't be welcomed on new platforms, those people who have tried to force Marxism and thought control on us."

“I've licked my wounds, I'm pissed off. I'm more pissed off than I was the night of the election I created Stop the Steal. We win. They lose. To God be the glory," he said in closing.

Ahead of the Capitol insurrection, Alexander embraced increasingly violent rhetoric, calling for revolution and rebellion. A short distance away from the White House the day before the insurrection, Alexander started a “Victory or death!" chant at a Stop the Steal rally. “Our government is only our government if it is legitimate," he declared at that rally. “1776 is always an option."

After the violence at the Capitol, Alexander posted a since-deleted video of himself saying “I don't disavow this. I do not denounce this." He encouraged viewers to tune into his Stop the Steal website, which he called “the home of the rebellion against an illegitimate government."

This article was originally published at Right Wing Watch and is republished here by permission.