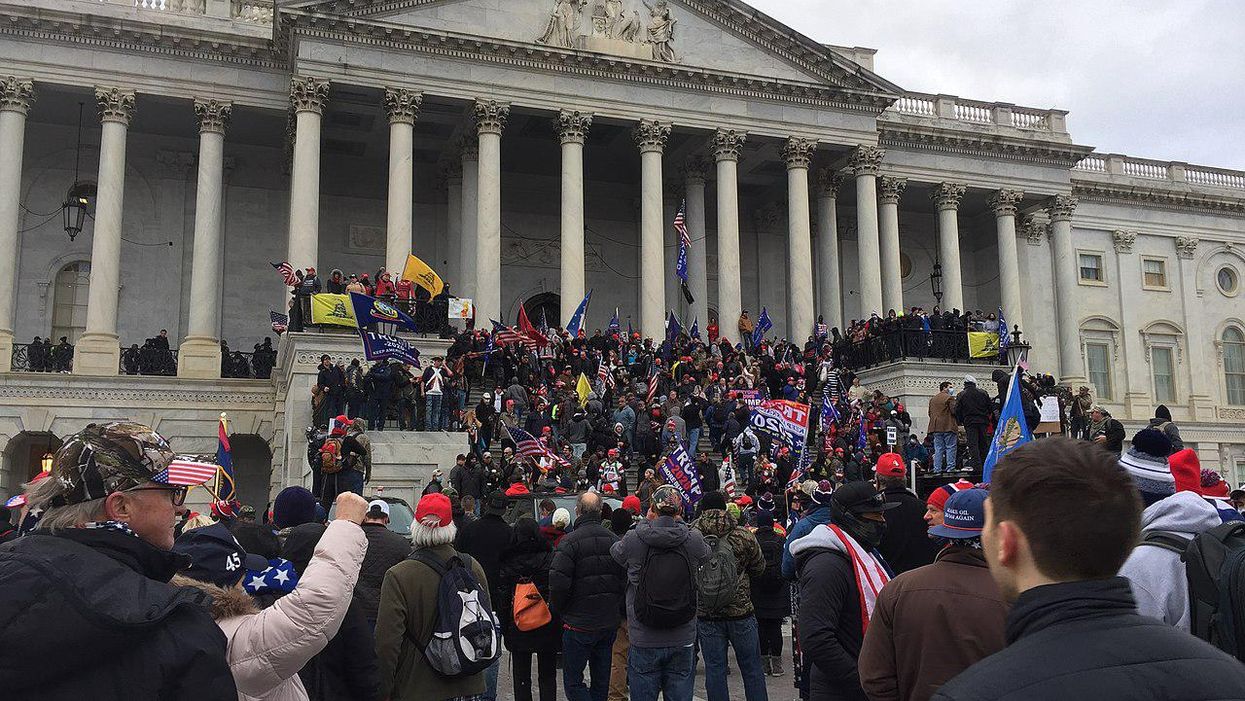 Supporters of President Donald Trump outside the U.S. Capitol Building on January 6, 2021, TapTheForwardAssist
'We must act': Far-right conspiracy cultists watch Myanmar’s military coup unfold — and hope for the same in US
David Badash
and
The New Civil Rights Movement
February 07, 2021

A reporter attending Friday's White House press briefing has earned national scorn after trying to equate the domestic terrorists and insurrectionists who engaged in the January 6 attempted coup that led to more than five deaths and caused about 150 Capitol Police to be injured, with the loosely organized anti-fascism movement known as Antifa.

"I think a lot of people want to know how does this administration define the term 'domestic terrorist'?" the reporter, whose identity is currently unknown, asked.

"Does that include Antifa? Specifically, what, how do you set those parameters for domestic terrorists especially as we see, you know a lot of focus on the January 6, maybe not as much focus on some of the extremism and violence in the north, the Northwest," she sputtered.

"Well, I've answered a version of this question a couple times before," Psaki replied, gently encouraging the fledgling reporter to do her homework before entering the hallowed room, "but I know everybody's not in the briefing room every day. The reason we have the [domestic violent extremism] review – which is not a political review – but is a review done by our national security team, something tasked again to take a review of domestic violent extremism, will cover incidents, across the board."

Many responded on social media, few were as gracious as the press secretary.

Antifa are literally a bunch of loosely organized groups of anti-fascists who show up when neo-Nazis show up and sometimes physically fight them. But for the right, ANTI-fascist and anti-racist groups are literally the greatest enemy and bogeyman. It's really quite telling...
— Joy WE VOTED!! WEAR A MASK!! Reid 😷) (@JoyAnnReid) February 5, 2021

She doesn't even know who she after that smack.
— idking (@AnIdiotKing) February 5, 2021

Here is the OTHER pendeja. Fucking racist because she's trying to deflect away from the white Supremacist domestic terrorists with a false equivalency about the mythical “antifa". https://t.co/lOmJTaGDVt
— DeMarcus Gilliard (@semperdiced) February 5, 2021

Watching the White House briefing and I presume the previous female reporter was from a right wing outlet. It's remarkable how fixated the right is on “Antifa" (short for “anti-fascists) — and how defensive, even protective they are about white nationalists...
— Joy WE VOTED!! WEAR A MASK!! Reid 😷) (@JoyAnnReid) February 5, 2021

Reporters ask about “antifa" which is six stoned college kids in 3 dorms in 2 states who hate nazis. But they never ask about armed Militia who took state houses and tried to kidnap and kill a governor but “last summer" which is code for huge lines of peaceful BLM protesters. https://t.co/TTkj86uLnU
— Rabid Badger (@RabidBadger) February 5, 2021

DEAR GOD. I know that a man did shoot and kill someone in PDX, but "antifa" does not kill people, they are not a violent, terrorist org, unlike fascists. Yes, dumpster fires and graffiti have happened. THAT IS NOT TERRORISM. https://t.co/kLdQ3TlFk7
— AmyD (@amydipa) February 5, 2021