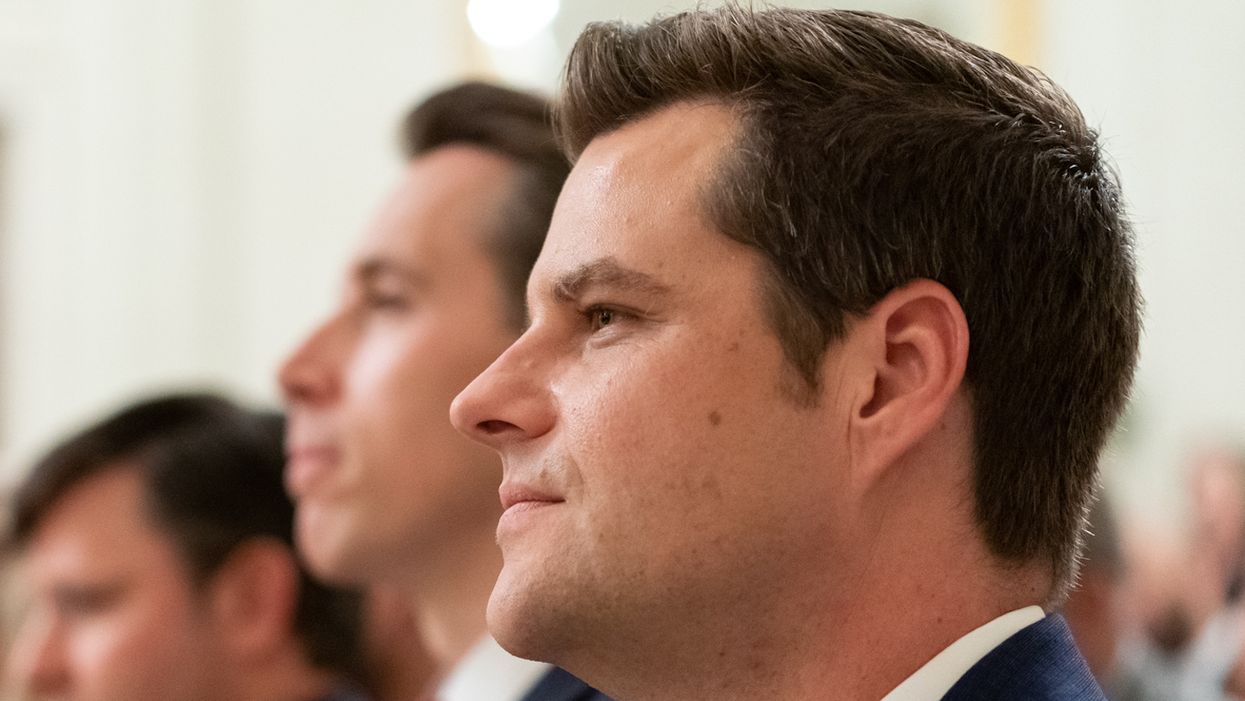 On Wednesday night, Wyoming Republican Rep. Liz Cheney survived a secret ballot vote in the House GOP caucus, allowing her to keep her position as third highest-ranking member of its leadership. Only 61 Republican members voted to remove her from her leadership role, with 141 voting in favor of her staying in palce, a significant blow for the pro-Trump faction of the party that sought to punish her for voting to impeach the former president.

Among the most vocal of Cheney's critics was Florida Republican Rep. Matt Gaetz, who had recently traveled to Wyoming to campaign against her. He had confidently boasted about having enough votes to oust her from leadership, suggesting the plan would only fail if House Minority Leader Kevin McCarthy blocked the effort.

"My concern is that though today, we have the votes to remove Liz Cheney, somehow the establishment's going to find a way to kick the question, avoid a vote," he had said.

"My concern is that though today, we have the votes to remove Liz Cheney, somehow the Establishment's going to find… https://t.co/F3YYkdI6wO
— Luke Ball (@Luke Ball)1612386284.0

After the vote, Ilinois Republican Rep. Adam Kinzinger, who also voted in favor of impeaching Trump, mocked Gaetz's comments: "No we voted. You were just wrong by like, a huuuuuge margin."

Notably, the vote in the House caucus was close to the mirror image of the vote to reject President Joe Biden's Electoral College victory. In total, 147 House Republicans had voted in favor of objections to Congress's counting of some of Biden's votes on Jan. 6 and Jan. 7, even after Trump supporters stormed the Capitol in an effort to disrupt the process.

Because the vote on Cheney was a secret ballot, one might infer that the genuinely and aggressively pro-Trump faction of the House GOP is smaller than it appeared. When members were voting on whether to overturn the 2020 election, they knew the public and their voters could be paying attention, so most sided with Trump. But when they knew their individual vote would not be recorded, and thus they could feel freer to just vote the way they preferred, they voted to keep a member of their leadership that had voted to impeach the former president. It raises an interesting, if unknowable, question: How many more Republicans would have voted to impeach Trump if that vote had been conducted via a secret ballot? (Only ten Republicans, including Cheney and Kinzinger, joined the Democrats to impeach Trump.)

CNN had reported that Trump himself, who recently met with McCarthy in an effort to reaffirm their alliance, hoped to see Cheney go down. He will likely be disappointed by the result of the vote on Wednesday, indicating his grip on the party is weaker than he thought. He could interpret the vote as an intraparty referendum on his own standing, and the outcome was not favorable.

On the other hand, it's not clear how much of a problem it actually poses for him. Most politicians' actions are done in public, not by secret ballot. And if a majority of GOP lawmakers continue to support Trump and endorse his having a major role in the party going forward only to please their own voters, that's probably good enough for him.

But a clear repudiation of Cheney would've been a big boost to his ego and a public demonstration of his sway over the party. Getting denied that is certainly a loss for the ex-president and his allies, if only for now.