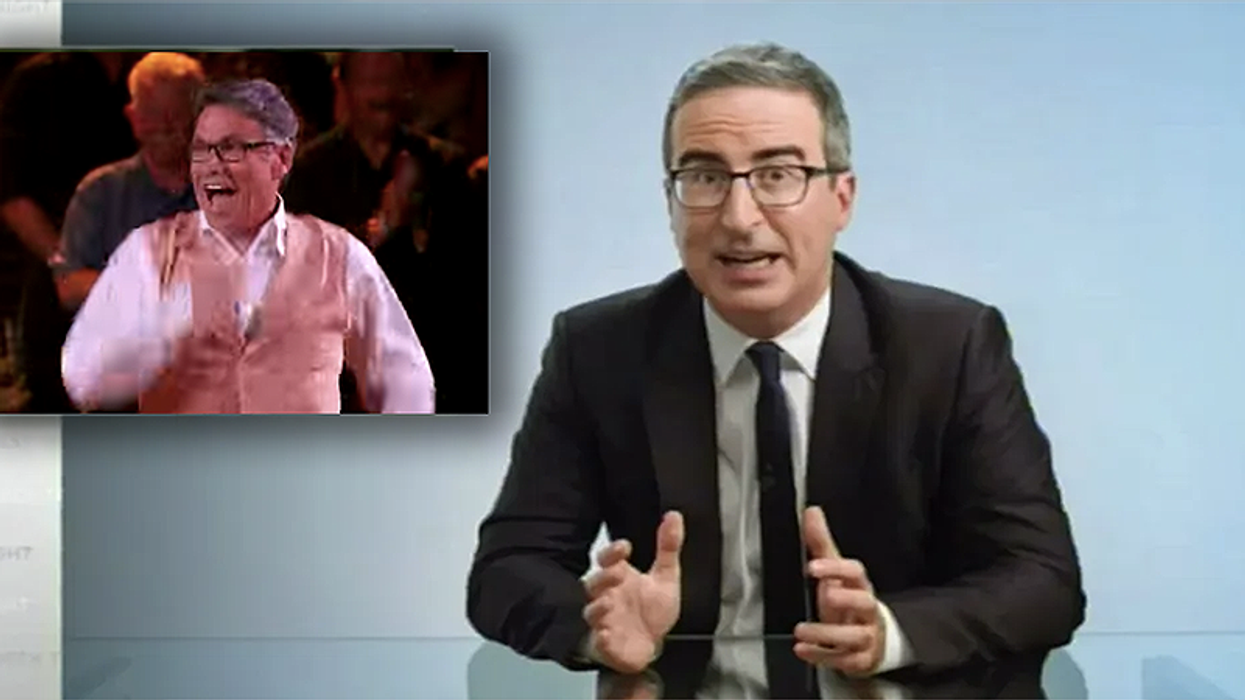 After a horrific week in Texas during a snowstorm and frigid temperatures, "Last Week Tonight" host John Oliver issued a rebuke of the epic mistakes Republicans have made for decades leading up to the crisis.

While Texas wasn't the only state to face record-low cold and snow, it was the only one that lost power across nearly the entire state and an overwhelming problem with water, sanitation and access to food.

Oliver began by calling out Fox News, particularly Tucker Carlson, who was caught lying about the frozen wind turbines being the cause of the Texas blackout. As Oliver pointed out, every one of Texas' wind farms could have been up and running and the whole state still would have had a blackout.

"Ok, first, we know Exxon Mobile isn't paying you, of course, no one is," mocked Oliver. "Your show has lost so many advertisers you're basically being bankrolled by a man in a sexual relationship with a pillow. Second, just because you loudly insist something isn't science doesn't make it science. That's science. Finally, calling windmills silly fashion accessories is just absurd. The only time you could conceivably make that claim is when the Bachelor contestant, Kendra, dressed up as a windmill for her night one entrance..."

Oliver moved on to Texas Gov. Greg Abbot (R), who repeated the claim from Carlson, and know it was "horsesh*t," said Oliver, noting that coal, natural gas and nuclear energy were all completely trampled by the cold this week.

The calamity, Oliver explained, is because Texas lawmakers designed the power grid to side-step any federal regulations.

"Sometimes when you're the only one doing something you're a pioneer, but sometimes you might be an idiot," he continued. "If you're the only person trying to set the world record for being covered in the most bees, maybe ask yourself, 'What am I trying to prove here, exactly? Why am I like this?' Because that independence meant that Texas was limited in its ability to import energy from neighboring states."

Oliver explained ERCOT is the company that manages the state's power grid, working with a slew of power companies all over the state. They went so far as to even admit that Texas was "seconds and minutes away from catastrophic monthslong blackouts." It's a big shift, he said, from last week when ERCOT was tweeting suggestions for ways people could save energy by unplugging their fancy appliances.

Oliver cited the Texas Tribune report that revealed ERCOT left it up to the individual power companies if they winterized their equipment, "many of which opted against costly upgrades."

Oliver showed videos showing lawmakers shaming power companies for failing during another storm ten years to the day before this year's storm took them down.

"So, Texas had a decade to prepare and it just didn't," he said. "So much of the problems this week stems from the Texas state philosophy on every man for himself. That attitude has defined the response from their officials too."

Oliver read the Facebook post from former Colorado City, Texas mayor Tim Boyd, who was ultimately forced to resign after telling his citizens that the city doesn't owe them any help during disasters.

"Then there was the saga of Ted f*cking Cruz," Oliver continued, recapping the story of the embattled senator. "Sure enough, he eventually admitted that he planned to stay the whole time and blamed his pre-teen daughters for the trip, saying that they'd asked him to go and 'I was trying to be a good dad.' Because the first rule of fatherhood is to throw your daughters under the bus at the first opportunity."

Ultimately, it was thanks to Heidi Cruz's group chats from her neighbors that outed the couple for their lavish vacation at the Ritz Carlton.

"I mean, that's just incredible," Oliver said. "Ted Cruz, who, remember, wants to be president, told the world he was pleaded into international travel by tweens. Then cyber-bullied into coming back by the internet, leaving his wife to solo-parent two kids on vacation in another country while trying to figure out who in her Mom group doxxed her. It's all amazing!"

But the ultimate defeat of Texas swagger came from former Gov. Rick Perry (R-TX), who also had the privilege of serving as former President Donald Trump's energy secretary. Perry told Fox that his state would "sacrifice" days in a blackout to ensure their energy grid remains unregulated.

Oliver's response: "Oh, f*ck off, Rick Perry. Far be it for me to question the wisdom of a man who failed running for president twice and who came in 12th on Dancing with the Stars. Meaning, he lost to Mitt Romney, Donald Trump and Vanilla Ice."

As Oliver explained, the thing about sacrifice is people have to volunteer to do it. It's a different story when it's trust unwillingly upon them.

See Oliver's epic takedown in the video below: