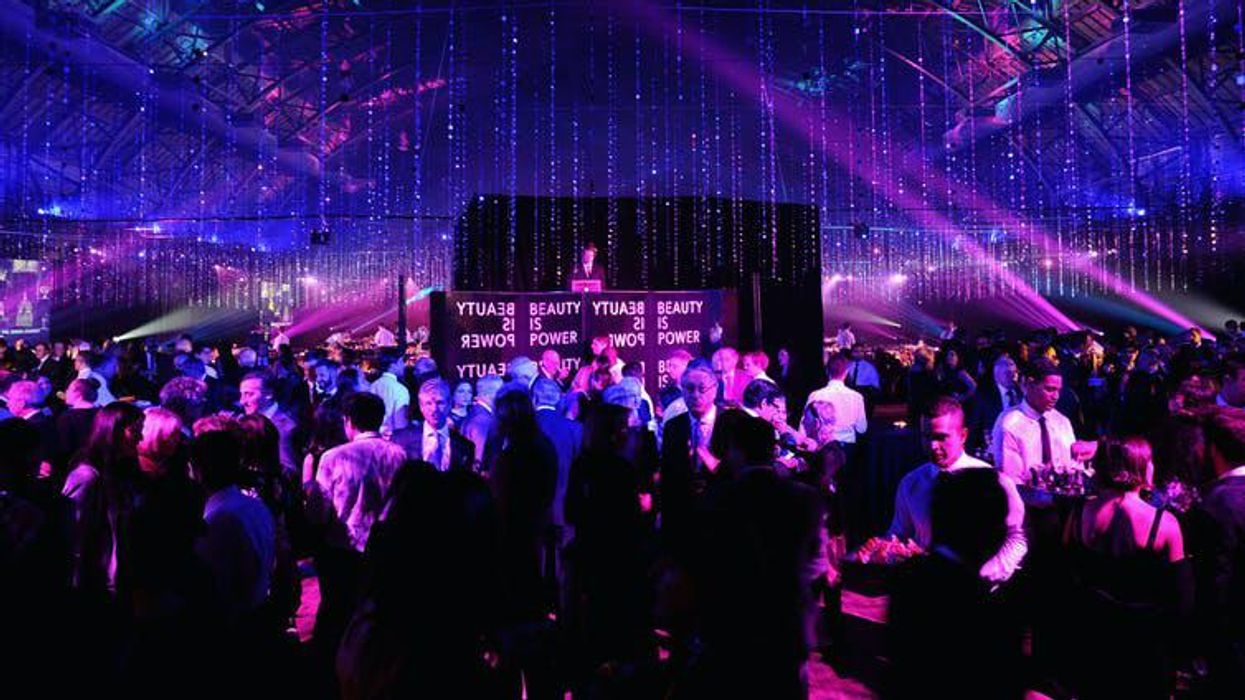 The Jewish Museum's Purim Ball at the Park Avenue Armory in 2015 in New York City.Andrew Toth/Getty Images
The Conversation
February 27, 2021

Purim, which falls this year on Feb. 26, ranks among Judaism's most joyous holidays.

In synagogues, Jews read the Scroll of Esther, a book in the Hebrew Bible that explains how Purim came to be. Jewish people dress up in costumes and host carnivals. At home, they indulge in festive dinners with ample wine. It's a time of togetherness. Jews deliver treats to one another and make sure to provide charity for their most needy.

As a historian of American Judaism, I point to Purim as an important holiday that did much to increase Jews' visibility in the United States in the 19th century.

During that period, Purim put a social spotlight on New York's Jews and their up-and-coming relationship to the city's most elite class.

The story of Purim

Purim tells the tale of Esther, an orphaned girl-turned-queen, how she married King Achashverosh, then saved the entire Jewish community in the ancient Persian city of Shushan, through her bravery and wit.

Mordecai was also Esther's uncle, a fact unknown to Achashverosh, so that Esther's Jewish identity could remain concealed. When Queen Esther learns about Haman's plan, she risks her life and discloses her Jewishness to her husband. The king sides with his bride over his doomed advisor. Purim became a celebration of the victory of Shushan's Jews over the evil Haman.

The Purim story resonates with today's American Jews. It's packed with contemporary themes such as charges of dual loyalty, that Jews cannot be trusted as Americans when they remain tied to Israel. With many Jews marrying outside of their religion, Purim rings relevant on the issue of intermarriage as well.

Yet, Esther's tale was perhaps less useful in the 19th century when America's Jews were not so visible and they weren't as concerned about assimilation. When a group of New York Jewish socialites invented the Purim Ball in the 1860s, their intention was to downplay Purim's Persian legend.

Their goal was to be the same, not different. They wanted to be counted in Manhattan's upper crust.

The start of a fancy Purim Ball

In January 1860, Myer Isaacs, a lawyer and political activist, issued a proposal in the pages of the Jewish Messenger, a weekly published in his native New York by his father, Samuel Myer Isaacs. The younger Isaacs suggested “Purim night should be selected as the occasion of a good fancy dress ball, the proceeds to be devoted to charity."

Isaacs's assumptions about the linkage between a classy event and fundraising was typical of the “charity market" among Victorian Era elites. Philanthropy was an exchange: The donor obtained an “experience" — musical concerts, theater, for example — for his or her generous contribution.

It was a period when charity provided the affluent with an opportunity to solidify their place atop the social ladder.

Purim was an ideal candidate for this sort of ritual enhancement for New York's Jewish elite. One of its traditions was charity-giving; the Purim Ball over time would become a reliable source of income for the Jewish orphanages and welfare societies in New York. 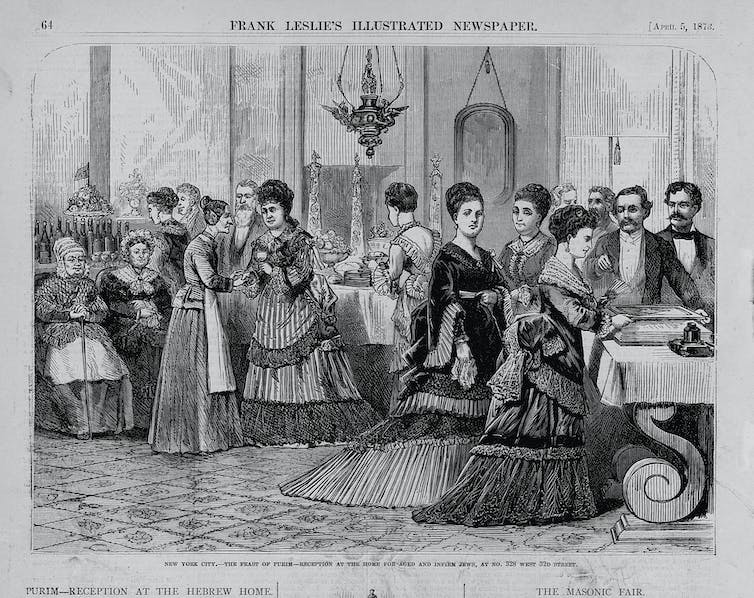 The Feast of Purim – Reception at the Home for Aged and Infirm Jews, at No. 328 West 32nd Street.

No one was quick to pick up on Isaacs's recommendation, however. Isaacs tried again the following year, always in the pages of his father's newspaper.

In 1862, he took more concrete steps. The 20-year-old gathered a small group of first-generation American Jews with aspirations to appear on a routine basis in the New York society columns. They organized the first Purim ball at Irving Hall, a prominent theater space in Manhattan, decorating the space with ornaments and plenty of pageantry such as entertainment and plays.

New York statute forbade masquerades, so Isaacs and his friends publicized it to wealthy New Yorkers as a “Fancy Dress Ball." The guests, Jews and non-Jews, intuited the meaning and appeared dressed as Little Red Riding Hood and Shakespearean figures such as Romeo and Hamlet. Even though it was a Purim event, there was no mention that anyone was expected to dress up as Queen Esther.

The affair was very well received by attendees, compelling Isaacs to formalize the Purim Association of the City of New York to help ensure the newfound tradition persisted.

The Purim Ball straddled the line between a Jewish ritual and a New York society event. Yet, it hewed in the direction of the latter, attracting the leading women and men of New York. The mayor, police chief and leading figures of Tammany Hall frequented the balls. The Purim Association did not hold the gala on the actual date of Purim — usually it was held the day after or in the subsequent week — allowing New York's Jews to observe Purim with its more traditional and less extravagant trappings.

The Purim Ball's second installment was upgraded to the grander and more capacious Academy of Music. Its organizers distributed 800 invitations, which turned out to be quite insufficient. In all, 3,000 women and men attended the ball in March 1863. A report published in the New York Times declared that a “more brilliant affair has never been witnessed at the Academy."

The Times article stated, “Very many exquisite evening toilettes set off the charms of the black-eyed belles in the boxes, and the universal masculine verdict is, that so many pretty faces have never before been seen at any one occasion, within the walls of the Academy." 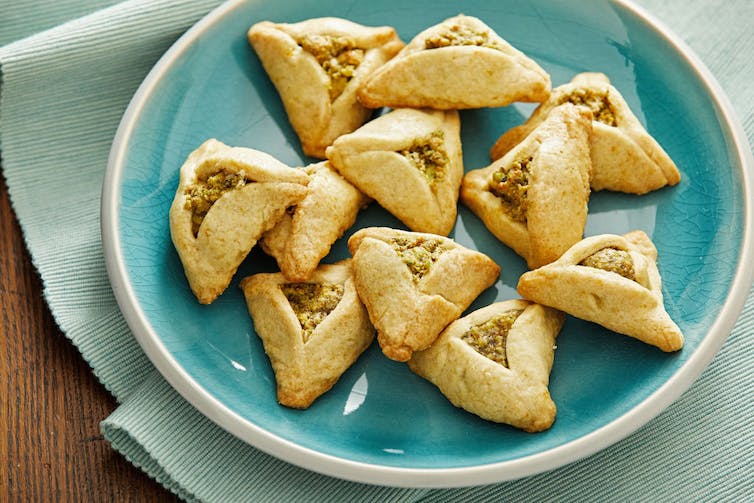 The masquerade theme might have fit into Purim tradition, but Isaacs intended for it to accommodate all New Yorkers. As Isaac then wrote in the Jewish Messenger, he wanted it to “come off in such a way as to justify the suggestion that all New York is celebrating Purim."

The favorable reviews were sufficient for Isaacs to declare that the Purim Ball had emerged, by its second iteration, as a Manhattan “institution," an affair “naturalized in New York."

The archives at the American Jewish Historical Society reveal that the top-priced seating boxes went to couples with Jewish surnames such as Seligman, Rosenwald, Schiff and Guggenheim. The Purim Association spared no expense on the music.

New York socialites and leading politicians continued to gravitate to the event, looking forward to the Purim Ball. Tickets for the event, sold at auction, did not last long on the open market, especially the preferred theater boxes.

[Insight, in your inbox each day. You can get it with The Conversation's email newsletter.]

By the 1890s, the Purim Association rented a larger space in Madison Square Garden and held bidding for the choicest seats in the vestry room of one of New York's most well-heeled synagogue, Temple Emanu-El.

The success of New York's Purim Ball inspired others to organize similar events. By the 1880s, it was replicated in dozens of communities.

St. Louis's Jews were very proud of their “well-regulated" masquerade ball which, they claimed was “one of the most enjoyable affairs in the society world."

In 1891, the Purim program held in Philadelphia, much influenced by a local aristocratic spirit, was fashioned more like a debutante ball, a coming-of-age event for upper-class young ladies.

The Purim Ball, then, was a cultural transaction. Jews believed it led them to acquire status and America obtained a curious and swanky incarnation of Purim, in New York and beyond.