Frederick Douglass is perhaps best known as an abolitionist and intellectual. But he was also the most photographed American of the 19th century. And he encouraged the use of photography to promote social change for Black equality.

In that spirit, this article – using images from the David V. Tinder Collection of Michigan Photography at the William L. Clements Library at the University of Michigan – examines different ways Black Americans from the 19th century used photography as a tool for self-empowerment and social change. 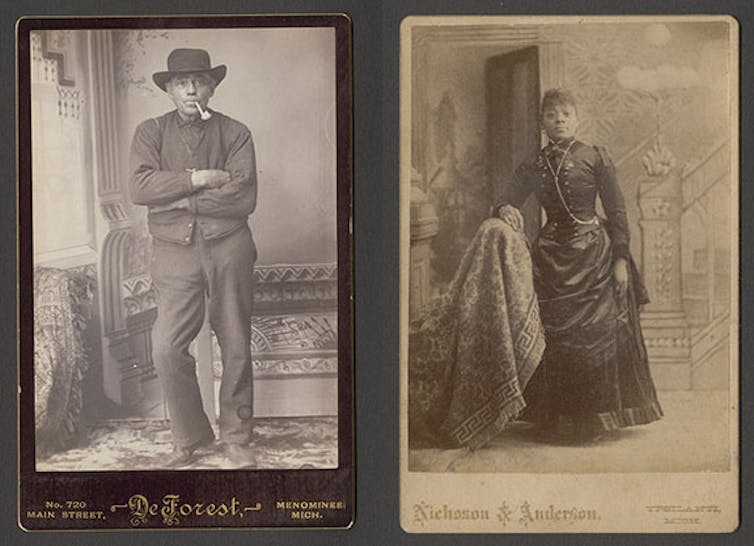 Cabinet card portraits of African Americans from the David V. Tinder Collection of Michigan Photography. Left: Man with Pipe, circa 1887. Right: Woman in Silk Dress, circa 1888.

Speaking about how accessible photography had become during his time, Douglass once stated: “What was once the special and exclusive luxury of the rich and great is now the privilege of all. The humblest servant girl may now possess a picture of herself such as the wealth of kings could not purchase fifty years ago."

To pose for a photograph became an empowering act for African Americans. It served as a way to counteract racist caricatures that distort facial features and mocked Black society. African Americans in urban and rural settings participated in photography to demonstrate dignity in the Black experience.

The first successful form of photography was the daguerreotype, an image printed on polished silver-plated copper. The invention of carte de visite photographs, followed by cabinet cards, changed the culture of photography because the process allowed photographers to print images on paper. Cartes de visite are portraits the size of a business card with several copies printed on a single sheet. The change from printing images on metal to printing on paper made them more affordable to produce, and anyone could commission a portrait.

Arabella Chapman poses for a portrait from her public carte de visite album, circa 1878 - 1880s.

During Victorian times, it was fashionable for people to exchange cartes de visite with loved ones and collect them from visitors.
Arabella Chapman, an African American music teacher from Albany, New York, assembled two cartes de visite photo albums. The first was a private album of family pictures, while the other featured friends and political figures for public viewing. The creation of each book allowed Chapman to store and share her photographs as intimate keepsakes. 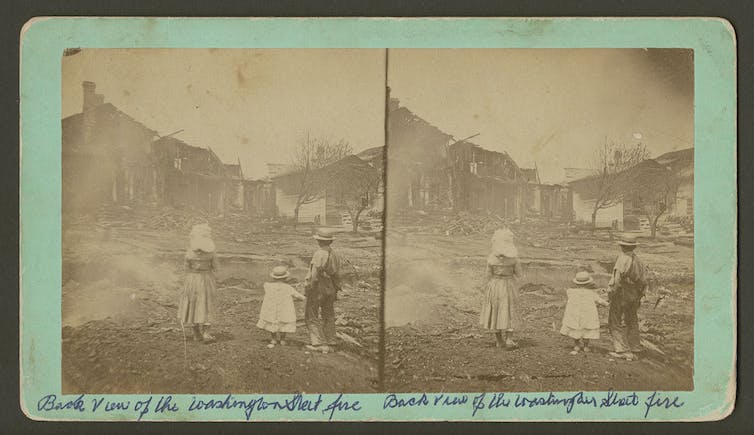 Children stare at the burned remains from the Washington Street fire, circa 1870s. David V. Tinder Collection of Michigan Photography.

Saginaw, Michigan, was an expanding settlement, and the brothers photographed new buildings in the town. They also documented natural disasters in the area. Photographers would capture 3D images of fires, floods and other destructive occurrences to record the impact of the event before the town rebuilt the area.

Burning the Mortgage of the Phyllis Wheatley Home in Detroit, Michigan, on Jan. 4, 1915. By Harvey C. Jackson.

The development of Black photography studios allowed communities greater control to style images that authentically reflected Black life. Harvey C. Jackson established Detroit's first Black-owned photography studio in 1915. He collaborated with communities to create cinematic scenes of important events. In one photo, Jackson documents a mortgage-burning celebration at the Phyllis Wheatley Home, established in 1897. Its mission was to improve the status of Black women and the elderly by providing lodging and services.

Mortgage-burning ceremonies are a tradition churches observe to commemorate their last mortgage payment. Harvey Jackson documented this occasion with each person holding a string attached to the mortgage to connect each person in burning the document.

African Americans' engagement with photography in the 19th century began a tradition for Black photographers' use of photography today to promote social change. African Americans, whether they are in front or behind the camera, create empowering images that define the beauty and resilience contained within the Black experience.