Historian: We shouldn't defend democracy 'with half-truths about the past' 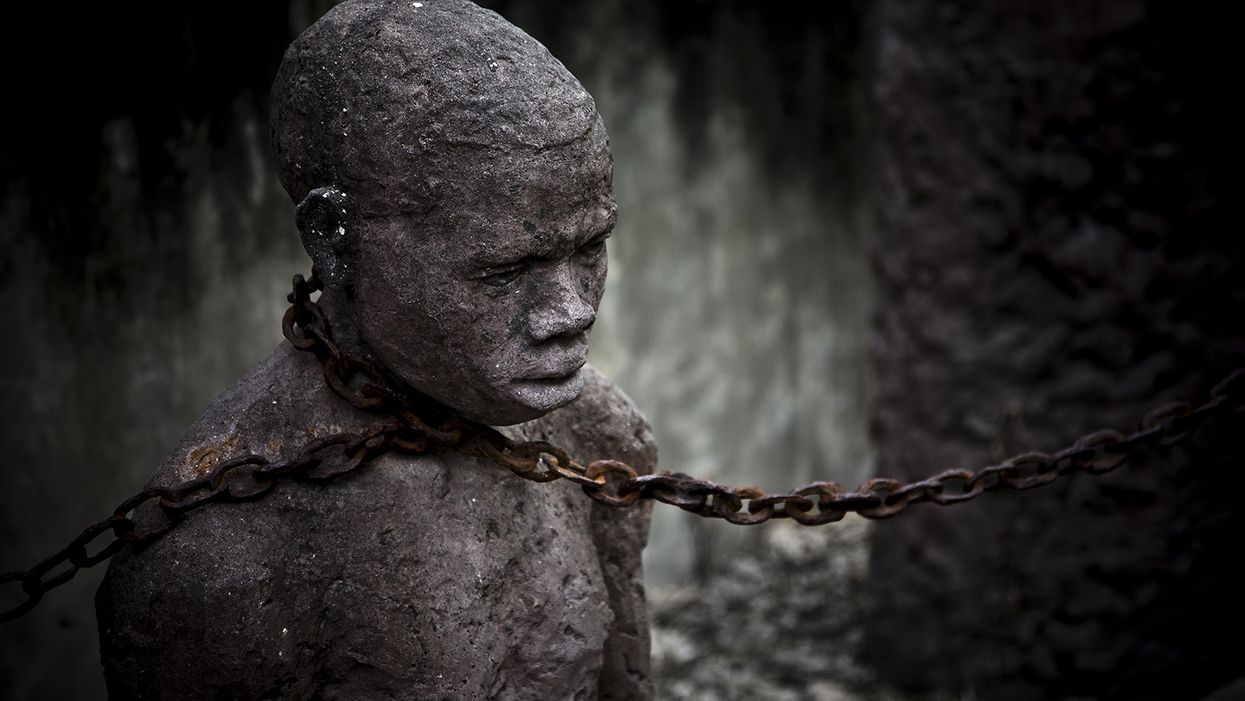 Royalty-free stock photo ID: 177970469 Statue of a child slave in Zanzibar.
Setting the historical record straight for the critics of The New York Times project on slavery in America
History News Network
February 21, 2021

We often learn most from people who don't share our worldviews. German Carl Schmitt, a reactionary critic of democracy, provides uncanny insight into the uncivil war of opinion after the 2020 election. Constitutional democracies, Schmitt argues, seek a foundation in legality, that is rule by law, but belief in a state's legitimacy depends on a sense of tradition embodied in myths and symbols.

On January 6 insurrectionists convinced by the lie of voter fraud legitimated breaking the law because they felt that they were, like the liberty-loving Minutemen of Concord and Lexington, protecting the country. The same invocation of the spirit of 1776 animated the Confederacy, which claimed to protect "liberty" while in fact legitimating slavery. After the Union victory, paramilitary white supremacists imagined themselves as Minutemen redeeming the South from a threat to its way of life.

The response of those rightly horrified by the events of January 6 is more complicated. Understanding the threat to democracy by a lawless attack on the symbolic citadel of "the people," they mistakenly conflate rule by law with democracy and rely on myths about the nation's founding after the Revolutionary War and its second founding after the Civil War. For instance, historian Jon Meacham, a frequent media commentator, claims that "the framers intended America's to be a popular, not a legislative, government. The voters acting through the electoral process, not lawmakers in a parliamentary setting, were to determine the occupancy of the presidency." In fact, nowhere does the Constitution mention a role for votes by the people. Art II, sec 1, 2 of the Constitution leaves it up to each state to decide how to determine electors. "Each State shall appoint, in such manner as the Legislature, thereof may direct, a Number of Electors."

And yet cries of "un-American" arise when the Arizona state legislature undemocratically proposes a law allowing it to ignore people's votes and appoint electors in a manner perfectly consistent with the Constitution. Similarly, pundits equate unlawful acts of the insurrectionists on January 6 with ones by Josh Hawley and Ted Cruz on the floor of the Senate, although their challenges to state certifications followed procedures created by an 1887 law still in force. Rather than chauvinistic piety about rule by law, we need to address undemocratic actions enabled by our Constitution and our legal system.

133 years ago constitutional scholar John Burgess criticized the 1887 law for making our flawed system of electing a president worse and therefore producing "a congestion of the body politic until nothing but blood-letting can relieve it." [See more here.] Burgess was prophetic. But he also points to the nation's contradictory past. Like many in the North, as well as the South, he denounced African American suffrage. Nonetheless, he did not have to worry about the Fifteenth Amendment, because it proved ineffectual in protecting Black voters. It is prohibitive, not affirmative. In forbidding states from denying suffrage on the basis of race, it allows other means for suppressing African American and immigrant voters. [See more here.] Unfortunately, partial accounts about the revolutionary change brought about by the constitutional amendments during the nation's second founding distract from the country's need to have an amendment that eliminates legal forms of suppression by affirmatively conferring the right to vote on all citizens eighteen years and older.

The major beneficiary of those partial accounts has been Ulysses S. Grant. Like President Biden, Grant faced the almost insurmountable task of reuniting the country while guaranteeing racial justice. Indeed, commentators, politicians, and media historians, urge Biden to combat domestic terrorists as "Ulysses the Silent" attacked the Ku Klux Klan. Introducing Merrick Garland as his nominee for attorney general, Biden himself praised the Grant administration for creating the Justice Department in 1870 in order to destroy the Klan. What actually happened is a warning, not a model.

Grant did invoke the April 20, 1871, KKK Act to break the back of the Klan temporarily in South Carolina, where his attorney general tried those arrested in federal courts. But success was limited. White supremacists thrived in other states. In South Carolina, most of the Klan's leaders escaped before trial. Furthermore, in the middle of the trials Grant fired his attorney general, most likely pressured by railroad tycoons upset with actions against monopolies. The new attorney general eventually stopped the trials. When ringleaders of the bloody racist massacre in Colfax, Louisiana, on Easter Sunday 1873 appealed to the Supreme Court, they were acquitted in a ruling that paved the way for undermining federal legislation against domestic terrorism. That decision was written by a Chief Justice appointed by Grant and joined by his other appointees. Even worse, in a gesture of national unity, Grant pardoned all Klansmen still in federal prison. [See more here.]

Presidential pardons are part of the Constitution, which also does not forbid a president from pressuring his attorney general. Grant replaced his last of numerous attorney generals the final year of his term during a shuffle in the cabinet when Secretary of War William Belknap was caught selling lucrative positions at Indian trading posts for a profit. Warned of his impending impeachment, Belknap ran to the White House where his friend Grant, without questions, accepted his resignation. The Senate tried Belknap anyway, but he was acquitted because 23 senators, who deemed him guilty, claimed the Senate had no jurisdiction over a private citizen. When, as a citizen, Belknap was indicted in the District of Columbia, Grant intervened and instructed his new attorney general to drop charges, which he did.

Myths about the founders and President Grant cannot restore legitimacy to a democracy in the wake of a second presidential impeachment and acquittal and facing competing demands to unify the country, rebuild the economy, address racial injustice, restore confidence in the presidency and Justice Department, deal with a conservative Supreme Court, and manage a pandemic.

Brook Thomas is Chancellor's Professor Emeritus of English and the Center for Law, Society, and Culture, UC Irvine. His specialty is 19th-century law and literature in the US. He has published six single-authored books including the prize-winning The Literature Of Reconstruction: Not In Plain Black And White (2017), and a case book on Plessy v. Ferguson. A recent podcast on the accuracy and significance of the numerous recent references to Reconstruction in the media and on the floor of Congress is at: https://marktwainstudies.com/mythsofreconstruction/