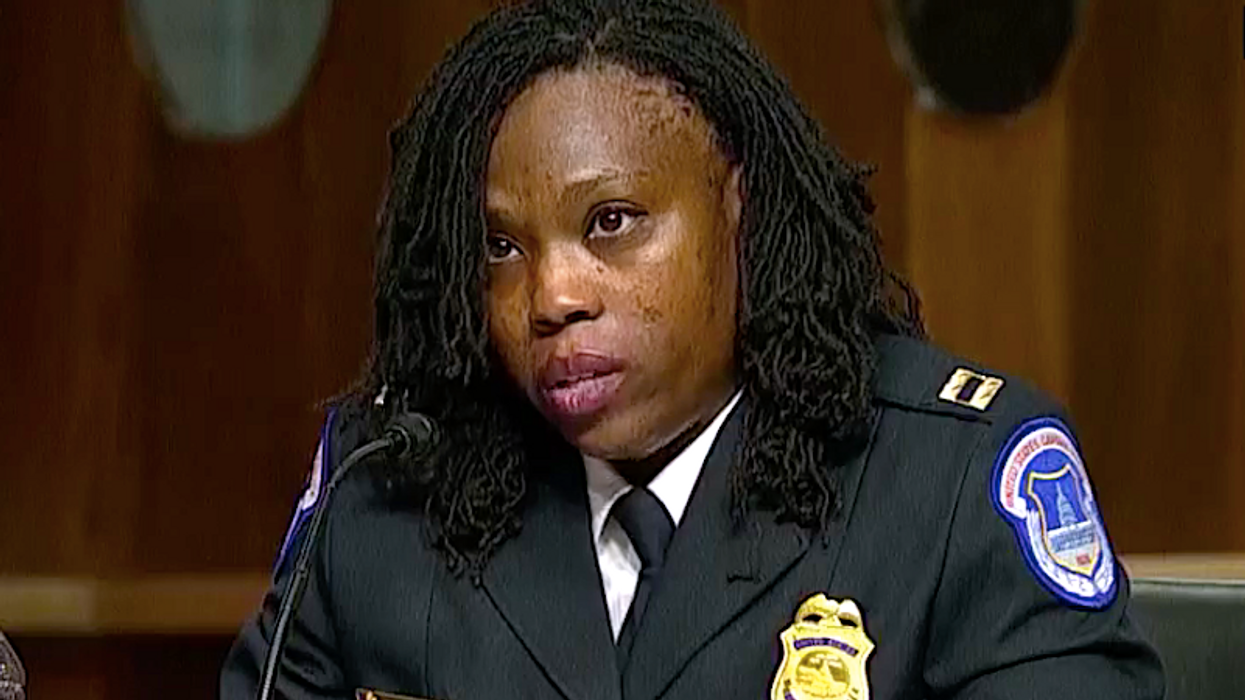 A Capitol police officer described her harrowing battle with former president Donald Trump's supporters during a violent insurrection aimed at overturning the election.

Capt. Carneysha Mendoza was a surprise witness during U.S. Senate testimony on the deadly Jan. 6 insurrection, and she told lawmakers the former president's supporters attacked police with military-grade chemical gas that left her with possibly permanent injuries.

"We anticipated an event similar to the 'Million MAGA March' that took place on Nov. 14, where we would likely face groups fighting among one another," Mendoza testified. "Additional civil disturbance units were activated that day. I was working the evening shift and had planned to report in at 3:00 p.m. I was prepared to work a 16-hour shift and assume field commerce commander should the event continue into the evening and overnight shifts. It was approximately 1:30 in the afternoon, I was home eating my 10-year-old, spending time with him before what I knew would be a long day, when a fellow captain contacted me and told me things were bad and that I needed to respond. I literally dropped everything to respond to work that day early."

"I was able to enter a lower level door with the assistance of a Capitol division officer," she testified. "Once inside of the door I immediately noticed a large crowd of possibly 200 rioters yelling in front of me. Since I was alone, I turned to go back so I could enter another door, but within the few seconds it took me to walk back to the door I entered there were already countless rioters outside of the building banging on the door. I had no choice but to proceed through the violent crowd in the building. I made my way through the crowd by yelling and pushing people out of my way until I saw Capitol police civil disturbance units in riot gear in the hallway. They were holding the hallway to keep rioters from penetrating deeper into the building. I immediately jumped in line to assist with holding the crowd of rioters. at some point my right arm got wedged between rioters and at railing along the wall. A CDU sergeant pulled my arm free and had he not, I'm certain it would have been broken. I assisted an officer to safer location and got back in line."

The crowd finally breached the police line, she testified, and civil disobedience units fanned out to prevent rioters from entering other areas of the Capitol where lawmakers, staffers and journalists were hiding, and Mendoza that's when Trump supporters used chemical weapons.

"I proceeded to the Rotunda, where I smelled what I believed to be military-grade CS gas, a familiar smell," the Army veteran testified. "It was mixed with fire extinguisher spray. The rioters continued to deploy CS into the Rotunda. Officers received a lot of gas exposure, which is worse inside of the building rather than outside because there is nowhere it could go. I have received chemical burns to my face that still have not healed to this day. I witnessed officers being knocked to the ground and hit with various objects thrown by rioters. I was unable to determine what the objects were. I assumed command in the Rotunda and asked for additional assets. After a couple of hours officers cleared the Rotunda but had to hold the door closed because it had been broken by the rioters.

"Officers begged for for relief as they were unsure how long they could keep the doored with the rioters attempting to gain re-entry," Mendoza added. "They were able to secure the door with furniture and other objects. I'm proud of the officers I worked with on Jan. 6, they fought extremely hard. I know some said that the battle lasted three hours, but according to my Fitbit I was in the exercise zone for four hours and nine minutes, and many officers were in the fight before I arrived."