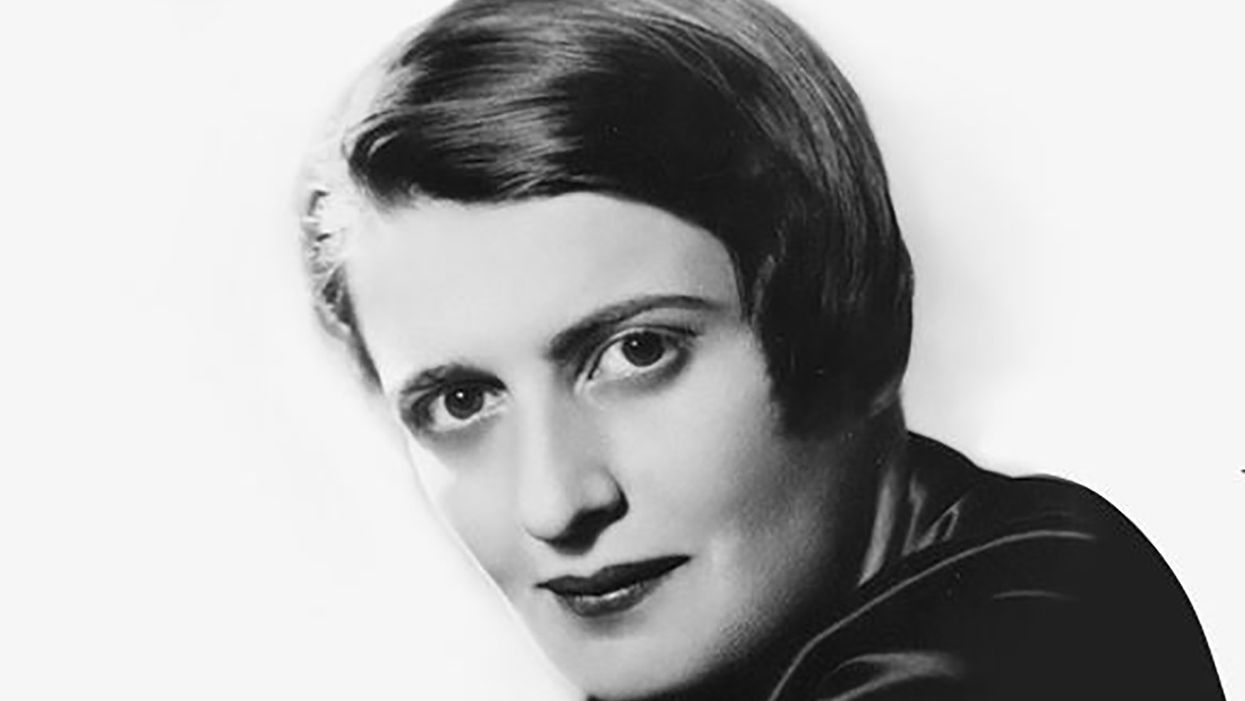 Ayn Rand image via Wikipedia
The politics of sociopathic selfishness: How Trump is the embodiment of an Ayn Rand hero
Chauncey DeVega
February 24, 2021

Behold! Death rides upon a pale horse — and Death is a Republican.

The coronavirus pandemic has now killed more than 500,000 people in the United States. This is roughly equivalent to the cumulative number of Americans lost in World War II and the Korean and Vietnam wars. These deaths from the coronavirus were largely preventable.

Instead, at almost every opportunity Donald Trump and his regime, through willful negligence if not outright sabotage and negligent homicide, made decisions which caused more deaths, not fewer, from the pandemic.

The country's season of mass death, now nearing its one-year anniversary, will negatively impact American society for generations to come.

A new report by The Lancet, one of the world's leading medical journals, shows in great detail how the Trump regime's response to the coronavirus (and the country's well-being more generally) actually shortened Americans' lifespans through incompetence and malevolence.

The report, titled "Public policy and health in the Trump era" features this summary:

The global COVID-19 pandemic has had a disproportionate effect on the USA, with more than 26 million diagnosed cases and over 450 000 deaths as of early February, 2021, about 40% of which could have been averted had the US death rate mirrored the weighted average of the other G7 nations.
Many of the cases and deaths were avoidable. Instead of galvanising the US populace to fight the pandemic, President Trump publicly dismissed its threat (despite privately acknowledging it), discouraged action as infection spread, and eschewed international cooperation. His refusal to develop a national strategy worsened shortages of personal protective equipment and diagnostic tests. President Trump politicised mask-wearing and school reopenings and convened indoor events attended by thousands, where masks were discouraged and physical distancing was impossible.

The racial disparities are extreme: the life spans of Black and brown Americans have been shortened, compared to whites. Given the Trump regime's racial authoritarian policies, as well as its overall hostility to nonwhite people, such an outcome is a feature and not a bug. The Lancet report continues: "COVID-19 has increased the longevity gap between Black and white people by more than 50%, ... Overall, in the USA, Black and Latinx people have incurred more total years of potential life lost than white people because of COVID-19, although the white population is three to four times larger."

In addition, since 1980 public policies have reduced Americans' lifespans by 3.4 years as compared to the other "advanced" countries in the G7 (with data included through to 2018). America's public health problems considerably predate Trump's tenure in office — but his regime made them much worse.

On this, The Lancet report specifically notes Trump's "disdain for science and manipulation of hatred," adding that his "Make America Great Again" promise "camouflaged policies that enriched people who were already very wealthy and gave corporations license to degrade the environment for financial gain."

The mass death from the coronavirus pandemic reflects a broader pattern of negative outcomes, largely caused by the Republican Party and broader right-wing "conservative" movement.

As exhaustively documented by public health experts and other social scientists, across a range of policies such as gun violence, tax policy, the environment, access to health care, education, voting rights and the size and strength of the social safety net more generally, Republican policies over the last several decades have resulted in the deaths of many more Americans, compared to the policies advocated by Democrats.

While Republicans and the right market themselves as being "pro-life," in reality their policies could more fairly be described as pro-death. These dire outcomes rest on the following foundation.

Neoliberalism or "gangster capitalism." Every part of society is to be financialized and subjected to the forces of the market. There is no innate value to human life and human dignity. "Democracy" is but a tool for the market and the moneyed classes to gain more control over society through a process that superficially legitimizes their authority and rule. In this sociopathic worldview, there are "makers and takers," "productive" people as compared to those deemed to be "parasites" and "surplus" human beings. Social democracy is to be destroyed and ultimately replaced by "market forces" and some version of "managed democracy" or "competitive authoritarianism".

Social Darwinism. This is a belief in the "survival of the fittest," where government is seen as having no obligation to the collective good. Moreover, instead of an understanding that government exists to solve problems that are greater than the ability of any one person to resolve, the state instead becomes a tool for plutocrats and other elites to secure more power and resources, at the public's literal expense.

Right-wing libertarian fantasies of "self-reliance," "freedom" and the evils of government. Modern conservatism and the right-wing movement have constructed their own alternate reality, one that rejects empirical reality and expert knowledge, and confuses dogma with truth. In total, it is a closed epistemology, a hallucinatory ideology where self-serving fantasies about the "economy" and "human nature" are taken as inviolate truths. This is a form of religious politics in which faith supersedes reason, substantive evidence and truth.

One of the central figures in this right-wing fantasy world is novelist and self-styled philosopher Ayn Rand, whose semi-coherent theories have helped to create an America where cruelty and selfishness have been elevated into virtue.

Lisa Duggan, author of the recent book "Mean Girl: Ayn Rand and the Culture of Greed," locates Rand relative to the current age of capitalist barbarism by observing that Donald Trump is not the only person in contemporary America "who mistakenly envisages himself as a Rand hero":

... the government and business world is full of Rand fans who read Atlas Shrugged in high school. The blend of right-wing white nationalism, combined with hard, zombie neoliberalism that rules the Republican Party right now does not align with Rand's purest economic and political vision. But the unifying social cruelty, the full deference to the wealthiest as the most deserving of tax breaks, the representation of the poor and of immigrants as unworthy and undeserving of any kind of assistance, the opposition to unions, to universal health care, to minimum wages — that is pure Rand.
Many advocates of these policies learned to legitimize them, learned to moralize them, as in "greed is good," from reading Rand or just from existing in a Randian milieu (we can be pretty sure Trump has not actually read Rand!). She is the dour visage presiding over the cruelties of our contemporary moment.

Coronavirus fascism. The Trump regime, the Republican Party and the right-wing movement do not believe in multiracial democracy. Fascism uses violence and destruction as a means of creating a "new" world, one based on a return to some mythical past. To that end, the death and misery caused by the coronavirus pandemic creates an opportunity to undermine democratic institutions (and the very idea of government itself) as well as to target those who are deemed to be "the enemy" for elimination.

Because coronavirus fascism wields power over its followers in part by arousing their fears, it is not entirely surprising that in the 2020 election Trump actually did better in regions of the country hit especially hard by the pandemic.

In a near-perfect crystallization of the cruel values the sustain today's Republican Party and right-wing movement, Tim Boyd, the Republican mayor of Colorado City, Texas, wrote on Facebook that those suffering through that state's ice and snow disaster and electrical outages should: "Sink or swim it's your choice! The City and County, along with power providers or any other service owes you NOTHING! ... If you are sitting at home in the cold because you have no power and are sitting there waiting for someone to come rescue you because your (sic) lazy [it] is [a] direct result of your raising." (Boyd was at least forced to resign in disgrace.)

Why do rank-and-file Republicans, Trumpists and other right-wing voters support leaders and policies that literally cause them illness, suffering and death?

There are many reasons, including a vast propaganda and disinformation machine comprised of the right-wing media, Christian nationalist churches and related organizations, schools and other socializing agents that create and sustain an alternate reality.

Political parties have become a marker of personal identity. This is especially true of Republicans and right-leaning independents. Because today's Republican Party is a full-on white supremacist organization, loyalty to the party (and to its neofascist leader) is an embrace of white identity as central to one's personhood. As a function of that relationship, any criticism of the Republican Party and right-wing movement is seen as an attack on the believers' sense of being and their emotional, psychological, cognitive and material investment(s) in white privilege and white supremacy.

Perhaps most importantly, rank-and-file Republicans, Trumpists, and other members of the white right believe themselves to be in an existential struggle against various enemies: liberals and progressives, Democrats in general, nonwhite people, Muslims, immigrants and other "enemies" who want to "end their way of life". Therefore, to embrace death is understood to be a patriotic act in service to a better future.

Ultimately, today's Republican Party and broader right-wing movement are a death cult, whose millions of ardent followers are willing to sacrifice themselves and their families to sustain it. Much to the dismay of the Democrats and others who believe in "normal politics," this is the reality we must all face. No "bipartisanship" or "unity" or "common ground" is possible with a fanatical death cult. Joe Biden's great task and responsibility is to make decisions with that fact in mind and then find a way forward to political victory and a better American society.