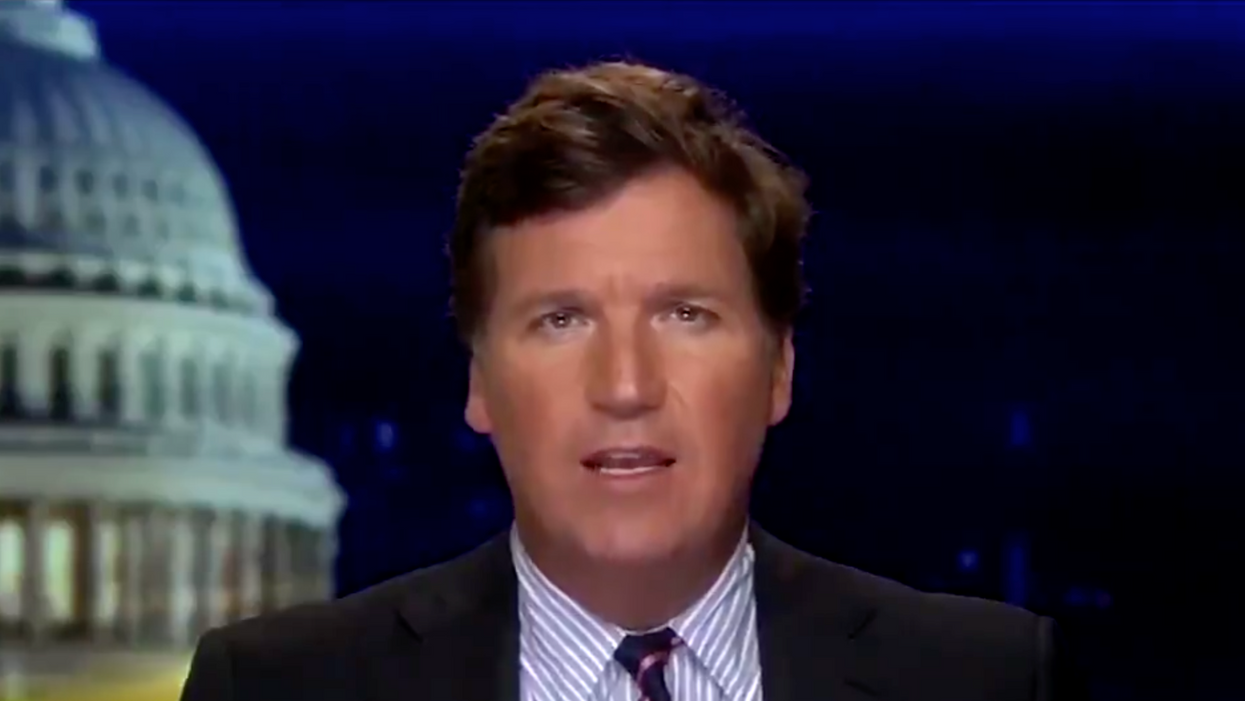 Fox News host Tucker Carlson met Twitter's wrath when he decided to mock Rep. Alexandria Ocasio-Cortez's (D-N.Y.) grim experience inside the U.S. Capitol. She and other members of Congress hid for their lives on Jan. 6 as angry Trump supporters stormed the federal building to prevent lawmakers from certifying the Electoral College vote for President-elect Joe Biden.

On Thursday, Jan. 14, Carlson tried to manipulate and twist the facts about the siege as he downplayed the disturbing incident that led to the deaths of five people, including one Capitol Police officer.

"It was not an act of racism. It was not an insurrection. It wasn't an armed invasion by a brigade of dangerous white supremacists. It wasn't. Those are lies," Carlson falsely exclaimed.

After diminishing the severity of the angry mob's actions, Carlson went on to mock Ocasio-Cortez. Describing the lawmaker as a "vacuous little totalitarian moron," the conservative host criticized Ocasio-Cortez's praise of officers for their efforts to combat the violent mob at the Capitol. In a video clip posted to Instagram, the Democratic lawmaker offered details about the harrowing series of events that took place inside the U.S. Capitol. At one point in the video clip, she revealed she "narrowly escaped death."

"I had a pretty traumatizing event happen to me," Ocasio-Cortez described. "And I do not know if I can even disclose the full details of that event, due to security concerns. But I can tell you that I had a very close encounter where I thought I was going to die."

That portion of her video is what Carlson sarcastically aimed to mock. "Narrowly escaped death," Carlson sarcastically declared. "When the most harrowing thing you've done in life is pass freshman sociology at Boston University, every day is a brand new drama! Sandy's heart is still beating fast!"

"But she likes the cops now despite the fact they're white supremacists," he smirked. "What a difference a day makes."

Twitter users were not pleased with Carlson's attack on the Democratic lawmaker. John Iadarola, host of the progressive show "The Damage Report," slammed Tucker's remarks describing his words as "despicable."

"Tucker Carlson and Fox have spent 2 years whipping their viewers into a murderous frenzy against anything [Alexandria Ocasio-Cortez] or [Ilhan Omar] say or do," Iadarola tweeted, "Then, when the inevitable happens and the mob tries to attack them, Tucker mocks them for fearing the violence he sent their way. Despicable."

Tucker Carlson and Fox have spent 2 years whipping their viewers into a murderous frenzy against anything @AOC or… https://t.co/vSO2lXnCmZ
— John Iadarola (@John Iadarola)1610728142.0

Another Twitter user wrote, "Ah [Tucker Carlson], someday I'll tell the whole story of what you said to me that night -- what was that low-rent White House/Capitol dinner we went to? You didn't see yourself going to Fox back then. Keep persecuting @AOC and others. It won't end well for you."

David Folkenflik, NPR media correspondent also tweeted, "Deflection, disparagement, diversion - Fox's Tucker Carlson has moved on to mocking lawmakers for fears of a mob howling for blood on their corridors, especially if it's AOC."

Carlson has yet to respond to the criticism he is facing for his remarks.