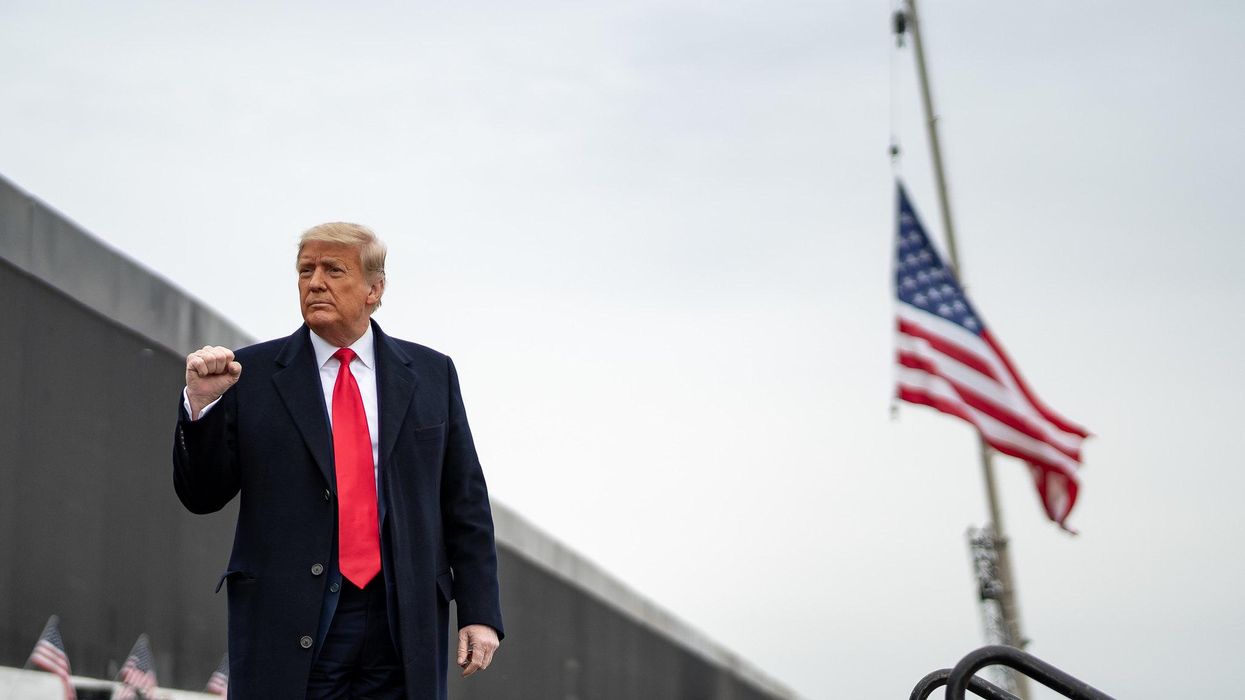 Image via Screengrab.
The Conversation
January 19, 2021

On Jan. 6, the world witnessed how language can incite violence.

One after another, a series of speakers at the “Save America" rally at the Ellipse in Washington redoubled the messages of anger and outrage.

This rhetoric culminated with a directive by the president to go to the Capitol building to embolden Republicans in Congress to overturn the results of the 2020 election.

“Fight like hell," President Donald Trump implored his supporters. “And if you don't fight like hell, you're not going to have a country anymore."

Shortly thereafter, some of Trump's supporters breached the Capitol.

Throughout his presidency, Trump's unorthodox use of language has fascinated linguists and social scientists. But it wasn't just his words that day that led to the violence.

Starting with a speech he made on Dec. 2 – in which he made his case for election fraud – we analyzed six public addresses Trump made before and after the riot at the Capitol building. The others were the campaign rally ahead of the runoff elections in Georgia, the speech he made at the “Save America" rally on Jan. 6, the videotaped message that aired later that same day, his denouncement of the violence on Jan. 7 and his speech en route to Texas on Jan. 12.

Together, they reveal how the president's language escalated in intensity in the weeks and days leading up to the riots.

Textual analysis – converting words into numbers that can be analyzed as data – can identify patterns in the types of words people use, including their syntax, semantics and vocabulary choice. Linguistic analysis can reveal latent trends in the speaker's psychological, emotional and physical states beneath the surface of what's being heard or read.

This sort of analysis has led to a number of discoveries.

For example, researchers have used it to identify the authors of The Federalist Papers, the Unabomber manifesto and a novel written by J.K. Rowling under a pseudonym.

Textual analysis continues to offer fresh political insights, such as its use to advance the theory that social media posts attributed to QAnon are actually written by two different people.

Contrary to popular thinking, Trump does not universally use inflammatory rhetoric. While he is well known for his unique speaking style and his once-frequent social media posts, in official settings his language has been quite similar to that of other presidents.

Researchers have noted how people routinely alter their speaking and writing depending on whether a setting is formal or informal. In formal venues, like the State of the Union speeches, textual analysis has found Trump to use language in ways that echo his predecessors.

In addition, a recent study analyzed 10,000 words from Trump's and President-elect Joe Biden's campaign speeches. It concluded – perhaps surprisingly – that Trump and Biden's language was similar.

Both men used ample emotional language – the kind that aims to persuade people to vote – at roughly the same rates. They also used comparable rates of positive language, as well as language related to trust, anticipation and surprise. One possible reason for this could be the audience, and the persuasive and evocative nature of campaign speeches themselves, rather than individual differences between speakers.

The road to incitement

Of course, Trump has, at times, used overtly dire and violent language.

After studying Trump's speeches before the storming of the Capitol building, we found some underlying patterns. If it seemed there was a growing sense of momentum and action in his speeches, it's because there was.

From early December to early January, there was an increase in the use of words that convey movement and motion – terms like “change," “follow" and “lead."

This is important, because it signals that the undertone of the speeches, beyond the overt directives, was goading his supporters to take action. By contrast, passive voice is often used to distance oneself from something or someone. In addition, research on linguistic indicators of deception has found that people who are lying often use more motion words.

Trump used the most presidential language in the video recorded the day after the riots, in which he denounced the violence, and in his Dec. 2 election fraud speech. His other four speeches more closely match the level of presidential language reflected in his State of the Union speeches.

The violence at the Capitol building and impeachment of the president have only added fuel to a contentious period marked by a pandemic, an economic crisis, widespread protests over racial inequality, a heated presidential election and citizens divided over real and fake news.

In this context, the role of language to calm, reassure and unify is more important than ever – and in this task, Biden has a steep challenge ahead of him.