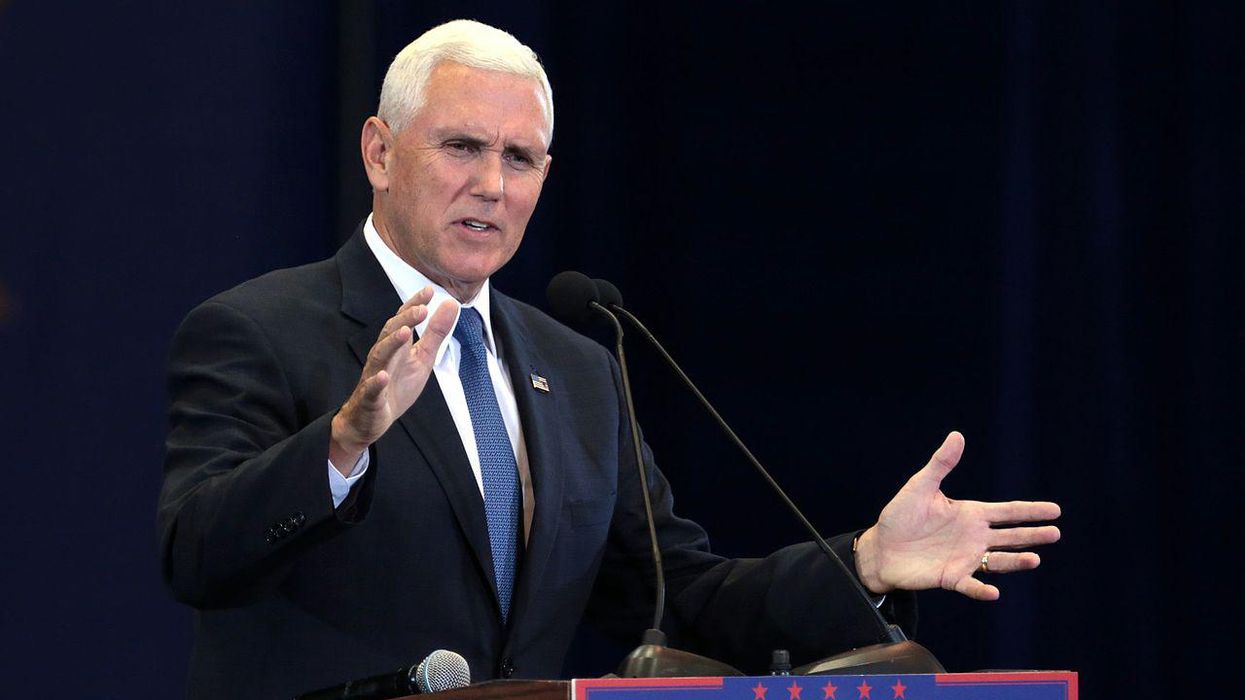 Mike Pence speaking with supporters at a campaign rally for Donald Trump at the Phoenix Convention Center in Phoenix, Arizona in 2016, Gage Skidmore
Alex Henderson
January 11, 2021

With the inauguration of President-elect Joe Biden less than two weeks away, some of President Donald Trump's most aggressive loyalists and defenders now find themselves being attacked by extremists for their supposed lack of purity — including Vice President Mike Pence, Senate Majority Leader Mitch McConnell, Sen. Lindsey Graham and former Attorney General William Barr. And the fanatics that they enabled and encouraged are now accusing them of not doing enough in support of Dear Leader.

The most disturbing example is Pence. When a joint session of Congress met on January 6 to certify Biden's Electoral College victory, Trump demanded that Pence prevent that certification — which he didn't have the power to do. Regardless, some of the far-right extremists and White nationalists who showed up in Washington, D.C. that day believed that Pence was letting Trump down. Groups of them began chanting, "Hang Mike Pence! Hang Mike Pence" — and a hangman's noose hung from a tree near the U.S. Capitol Building, which was stormed by a violent mob of Trump supporters. The same extremists who were hoping to harm Democratic House Speaker Nancy Pelosi that day advocated murdering Pence as well.

Graham has repeatedly jumped through hoops in support of Trump, from the Russia investigation to the Ukraine scandal and the president's impeachment to Trump's Supreme Court nominees. But after the storming of the Capitol Building, a frustrated Graham finally distanced himself from Trump — saying, "Trump and I, we've had a hell of a journey…. All I can say is: count me out, enough is enough. I've tried to be helpful."

Later, when Graham was walking through Washington, D.C.'s Reagan National Airport last week, he was heckled by angry Trump supporters who believed he hadn't done enough to help Trump overturn the election results. Video posted by CNN shows a Trump supporter shouting, "Lindsey Graham, you are a traitor to the country…. You garbage human being."

Barr's critics often accused him of debasing himself by becoming "Trump's Roy Cohn" — an insulting reference to the unscrupulous attorney who supported Sen. Joseph McCarthy during the 1950s and represented a young Trump in the private sector during the 1970s. But after the 2020 presidential election, Barr was branded a traitor by MAGA diehards for acknowledging Biden as president-elect and telling the Associated Press, "To date, we have not seen fraud on a scale that could have effected a different outcome in the election."

Following the events of January 6, Barr described Trump's conduct as a "betrayal of his office and supporters" and told AP, that "orchestrating a mob to pressure Congress is inexcusable."

MAGA diehards are also furious with McConnell, who was a staunch Trump ally throughout his impeachment and aggressively supported all three of Trump's Supreme Court nominees: Justice Neil Gorsuch, Justice Brett Kavanaugh and most recently, Justice Amy Coney Barrett. On December 15, however, McConnell acknowledged Biden as president-elect and congratulated him on the Senate floor — inspiring wingnut radio host Mark Levin to post, on Parler, "Thanks for nothing, Mitch. Trump helped you secure your seat, as he did so many Senate and House seats, and you couldn't even wait until January 6th. You've been the GOP 'leader' in the Senate for far too long. It's time for some fresh thinking and new blood."

Why would Mitch McConnell deliver such a body blow to patriots and Trump supporters? What’s he trying to tell us? https://t.co/cMBov6SN1i
— Dinesh D'Souza (@Dinesh D'Souza)1608062544.0

History shows that those who support fanaticism can become a victim of it themselves. Communist Leon Trotsky supported totalitarianism in the Soviet Union, and was murdered by Joseph Stalin's henchmen in Mexico because of his supposed lack of purity. And now, in 2021, the MAGA mob is turning against some of the very people who enabled it.