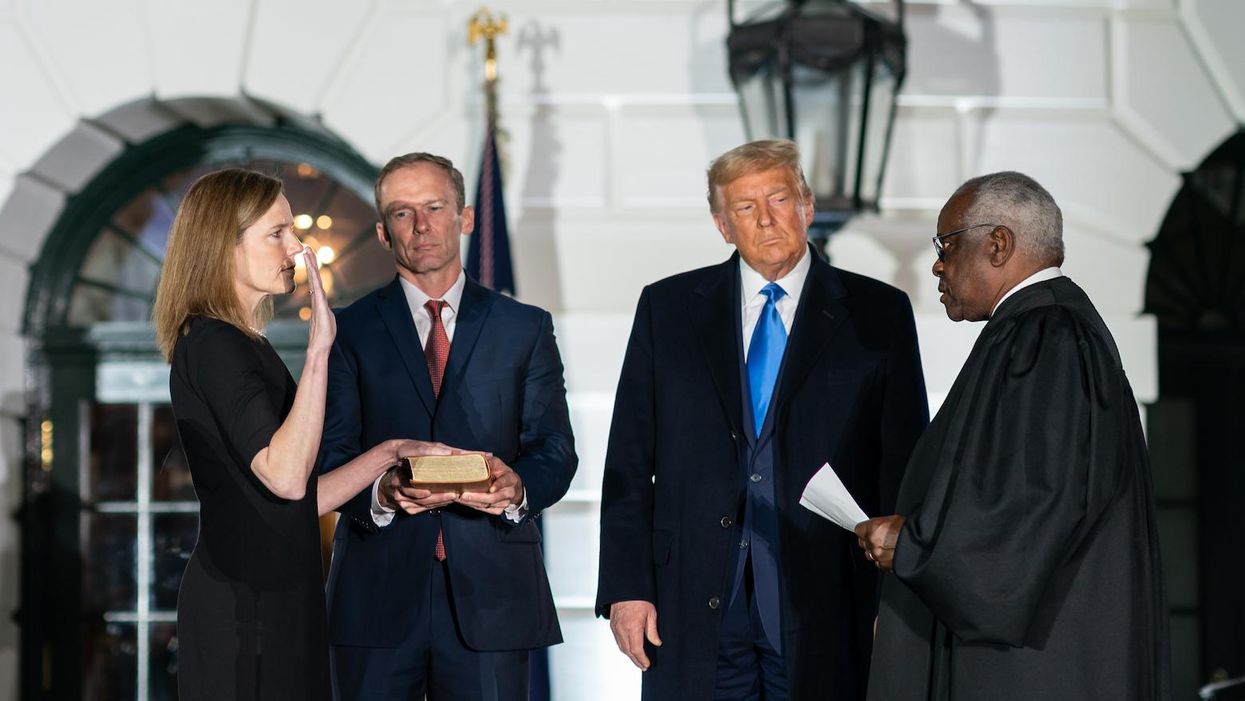 Although Democrats now control the White House and both houses of Congress, there is one branch of the federal government where their ideas presently have very little influence: the U.S. Supreme Court. President Joe Biden, Vice President Kamala Harris, Senate Majority Leader Chuck Schumer and House Speaker Nancy Pelosi find themselves saddled with the most right-wing Supreme Court in generations. But writer Keshav Poddar, in an article published by Slate this week, offers a possible Supreme Court coping strategy for Biden's administration and Democrats in Congress: essentially, backup plans for their legislation.

"Against all odds, an ideologically reinvigorated Democratic Party has won the House, Senate and presidency," Poddar observes. "Democrats have the opportunity to finally deliver long-overdue reforms to address structural economic inequality, provide every American with adequate health care and take aggressive action to save our environment before it is too late. But (Senate) Minority Leader Mitch McConnell has left Democrats with one big problem: the courts."

Although Democrats have won the popular vote in six of the last seven presidential elections, six of the nine current Supreme Court justices were appointed by Republican presidents. Some liberal pundits have proposed packing the court — that is, increasing the number of justices, which President Franklin Delano Roosevelt proposed during the 1930s. But Poddar points out that Democrats' slim majority in the Senate simply isn't enough for the type of "knockdown, drag-out fight that such a move would require."

Instead of thinking about court packing, Poddar suggests, Democrats should consider "another way to stop the Court from totally derailing progressive economic reform that Democrats can use right now."

"Democrats could deploy a new legislative tactic that has never been tried before: They can include 'clearly constitutional' precautionary backup provisions in progressive legislation that would automatically take effect if the primary policies in the bill are invalidated," Poddar recommends. "The backup provisions would usually involve extreme, but undeniably constitutional, policies designed to achieve the same original goals as the preferred policy. This will either force the Court to lay off of progressive programs, or enable progressive policy aims to be achieved even if it intervenes."

Poddar goes on to offer an example of how such an approach would work. If Congress passed a 2% wealth tax on fortunes over $100 million but Pelosi's attorneys warned that Republicans would challenge the tax as unconstitutional in the courts, Poddar argues, Democrats could have a backup plan.

"As a precaution," Poddar explains, "the speaker could insert an automatic backup provision into the wealth tax bill, which stipulates that if the wealth tax is invalidated by the courts, the stimulus program will instead be funded by dramatically increasing marginal income tax rates for high-income earners to 80%. Thus, you have two alternative policies contained in one bill. Most Democrats — and economists — probably prefer the wealth tax as a better, fairer policy. But big increases in marginal tax rates could achieve roughly the same goal, albeit less efficiently."

Poddar continues, "By using this tactic, Congress forces conservative judges to confront an unpalatable decision: intervene and strike down the wealth tax, ushering in a more disruptive but clearly constitutional alternative policy — or let the tax stand."


When they pass legislation, Poddar recommends, Democrats need to come up with "backup provisions" to protect "progressive economic policies that are at risk of judicial invalidation."

"This is the time to act," Poddar stresses. "Progressive policymakers and experts should flesh out this strategy, and its application to specific parts of the legislative agenda, now. That way, Congress can pass transformative legislation that will actually survive constitutional scrutiny from the stacked courts they have inherited from President Donald Trump."