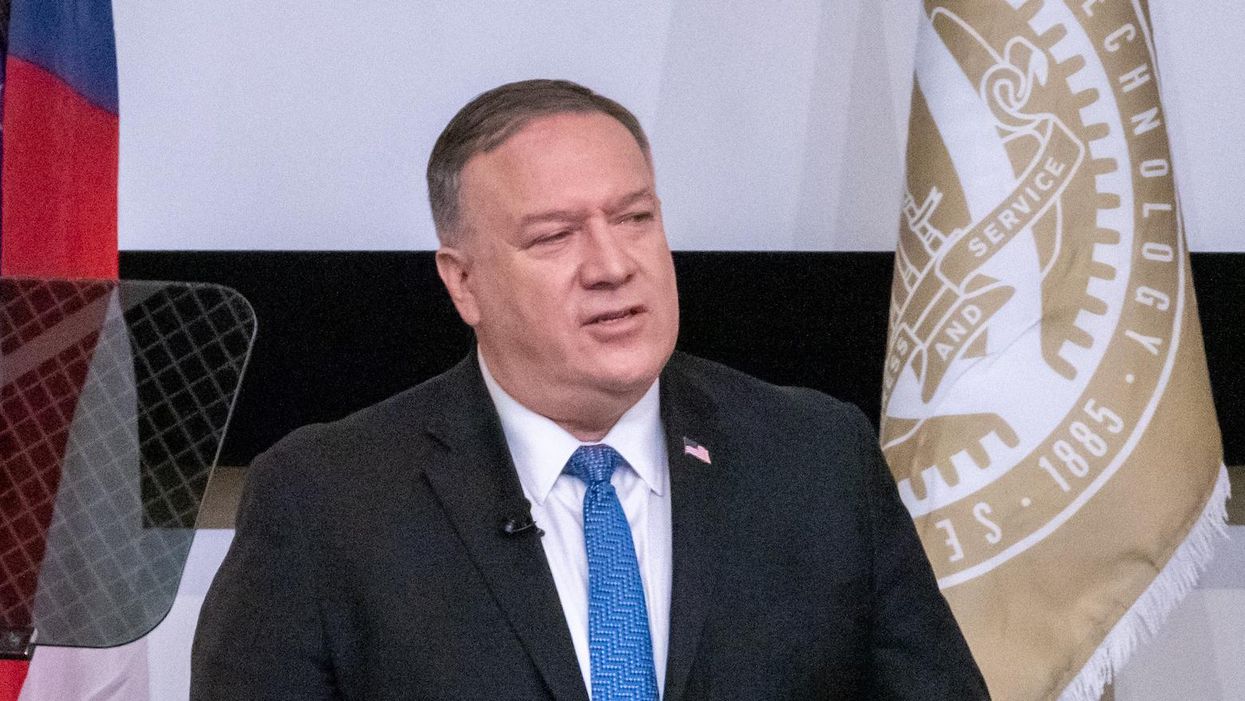 U.S. Secretary of State Mike Pompeo, long accused of mapping out a 2024 presidential run by using his office for political gain, kicked off the new year with a religion-tinged tribute to himself, and his "swagger," in a series of tweets.

"My New Year's Resolution: give the American people the full story about our foreign policy. You may not read it elsewhere," Pompeo tweeted in the first of more than a dozen tweets from his official U.S. government account."We're so much safer today than four years ago," tweeted Pompeo, a claim many experts find false. "Over the coming days, I'm going to lay out the mission set, the huge wins, personal stories, and a lot more. Just me, Mike."

The tweets are clearly meant to position him as the next Republican president, while paying homage to President Donald Trump.

This one disturbing tweet sums up Pompeo. He writes: "I've tied our foreign policy back to our noble founding."

The image is from Pompeo's 2018 swearing in. At the podium is his mentor, Mary Ann Glendon, an anti-LGBTQ and anti-abortion author and professor whom he would choose one year later to head his "Commission on Unalienable Rights."

That commission, he promised, would take a "fresh look" at human rights through the lens of "natural law." Pompeo, a far-right religious extremist who "talks about the rapture," The New York Times has reported, and says the Bible informs everything he does, sees "natural law" as an opportunity to attack LGBTQ people and issues like abortion.

Pompeo here is effectively saying being anti-LGBTQ and anti-abortion is part of America's "noble founding."

To be clear, Pompeo is telegraphing what a Pompeo presidency would focus on by including this image of Glendon and his talk of "noble founding." He has long spoken about far-right religious concepts, like the rapture, and claimed America is in a battle to advance Christianity.

Mr. Pompeo talks about the rapture. "We will continue to fight these battles," he said at a "God and Country Rally" in 2015, because there is a "never-ending struggle" until "the rapture."

"Be part of it," he said at the meeting, at the Summit church in Wichita, Kan. "Be in the fight."

At a speech in Cairo, Pompeo described himself as an "evangelical Christian" and said: "In my office, I keep a Bible open on my desk to remind me of God and his word, and the truth."

Observers found it remarkable that Mr. Pompeo would open a speech in a majority-Muslim country by highlighting his Christianity. And some critics have pointed out that Mr. Pompeo, before becoming secretary, made us-versus-them statements about Christians and Muslims while talking about terrorism and war.

Pompeo appears to be continuing his tweets, but for now the last two highlight what he calls his "swagger."