Corporate media needs to look at their own role in how we got here: media critic

President Donald Trump and First Lady Melania Trump arrive to the Murabba Palace, escorted by King Salman bin Abdulaziz Al Saud of Saudi Arabia, Saturday evening, May 20, 2017, in Riyadh, Saudi Arabia, to attend a banquet in their honor. (Official White House Photo by Shealah Craighead)
Trump has a plan to steal the election — in fact, he has at least 5 of them
Julie Hollar
and
FAIR
January 09, 2021

Media seem to have finally found the line they won't abide crossing. After both sides–ing the political situation for four years of Donald Trump, the storming of the Capitol by an armed rebellion incited by Trump himself has brought out swift and strong words. 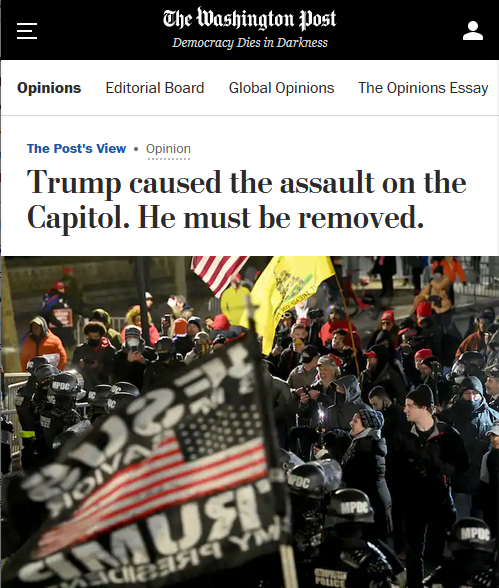 Washington Post (1/6/21): "Those who sought to benefit from Mr. Trump's mob-stoking rage…will always bear the stigma of having contributed to the day's shameful events."

"Trump Caused the Assault on the Capitol. He Must Be Removed," declared the Washington Post editorial board (1/6/21). "Responsibility for this act of sedition lies squarely with the president, who has shown that his continued tenure in office poses a grave threat to US democracy," they wrote. "He should be removed." They continued:

The president is unfit to remain in office for the next 14 days. Every second he retains the vast powers of the presidency is a threat to public order and national security. Vice President Pence, who had to be whisked off the Senate floor for his own protection, should immediately gather the Cabinet to invoke the 25th Amendment, declaring that Mr. Trump is "unable to discharge the powers and duties of his office."

The Post deplored GOP lawmakers like Ted Cruz and Josh Hawley who continued to press their baseless attempt to overturn the election, and praised Mitch McConnell, who "to his lasting credit" did not join them, even if, as they noted, "almost all" GOP members "bear some blame for what occurred on Wednesday." The Republicans, the paper wrote, have an "overriding responsibility to the nation: stopping Mr. Trump and restoring faith in democracy."

It's a surprisingly forceful position. At the same time, imagine if the paper—and the rest of the establishment media—had taken the GOP's threat to democracy seriously before it reached the point of the president inciting an armed insurrection on Capitol Hill. Yesterday's events were the logical outcome of years of the GOP and Trump casting aside institutional rules and norms one by one with increasing boldness, as the press corps described this increasingly authoritarian behavior as "us[ing] all of the levers of his power" (FAIR.org, 10/15/20), and years of giving Trump and his allies space to make their bogus claims of election fraud (FAIR.org, 9/15/20). The media's long history of both sides–ing the issue of purported election fraud (Extra!, 11–12/08, 10/12; CounterSpin, 10/21/16) paved the way for Trump's mythology that has seduced a breathtakingly—and dangerously—large proportion of the public.

Imagine if corporate media didn't praise McConnell, Lindsey Graham or any other Republicans who propped up Trump's dangerous lies for so long, for finally turning on him. Do they really believe we could have gotten to this point if McConnell and the rest of the party hadn't gone along with Trump's dangerously escalating lies–not just for the last several weeks, but for the last four years? If you keep your foot on the gas as the car speeds toward a cliff, but jump out a few seconds before you reach the edge, do you really deserve "lasting credit" for that?

The real test of corporate media will be not whether they are able to forcefully condemn a president's seditious acts, but whether they go back to business as usual after Trump is gone, pretending that the GOP, a disturbing number of whose members in Congress still pushed to overturn the election after the armed insurrection, is a democratic party that can be counted on to restore faith in democracy.

New York Times (1/5/20): "More than 150 Republican lawmakers have signed on to reject the votes of tens of millions of Americans."

The Times editorial board, while silent so far after the events of yesterday, did publish a fairly benign opinion the day before ("Trump Still Says He Won. What Happens Next?"—1/5/20), whose optimism clearly didn't take seriously the extensive planning underway in broad daylight on right-wing websites: "The Republican effort to derail Congress's electoral vote count on Wednesday will fail, and President-elect Joe Biden will be sworn in at noon on January 20, as the Constitution commands."

The Times could only muster the courage to say that "there is a strong argument" for impeachment (linking to an op-ed they published on January 4) without actually making that argument themselves; the piece concluded by praising Georgia Secretary of State Brad Raffensperger for resisting Trump's corrupt attempts at overturning the election results, and lamenting, "If only that weren't extraordinary in the Republican Party today."

What's missing so far is a mea culpa from the media for its own role in normalizing the GOP's long-term efforts to drag this country toward authoritarian rule—and their cynical enjoyment of the ratings bonanza provided by the enthralling spectacle of Trump's assault on democracy (FAIR.org, 3/1/16). Instead, we have the editor of Columbia Journalism Review (11/4/20) castigating the press for spending too much time in the past four years on Trump's "infinite faults," and not enough trying to understand Trump supporters (FAIR.org, 11/16/20).

Kudos to the Washington Post for finally calling for a political reckoning. Now it's time for you to call for a media reckoning.