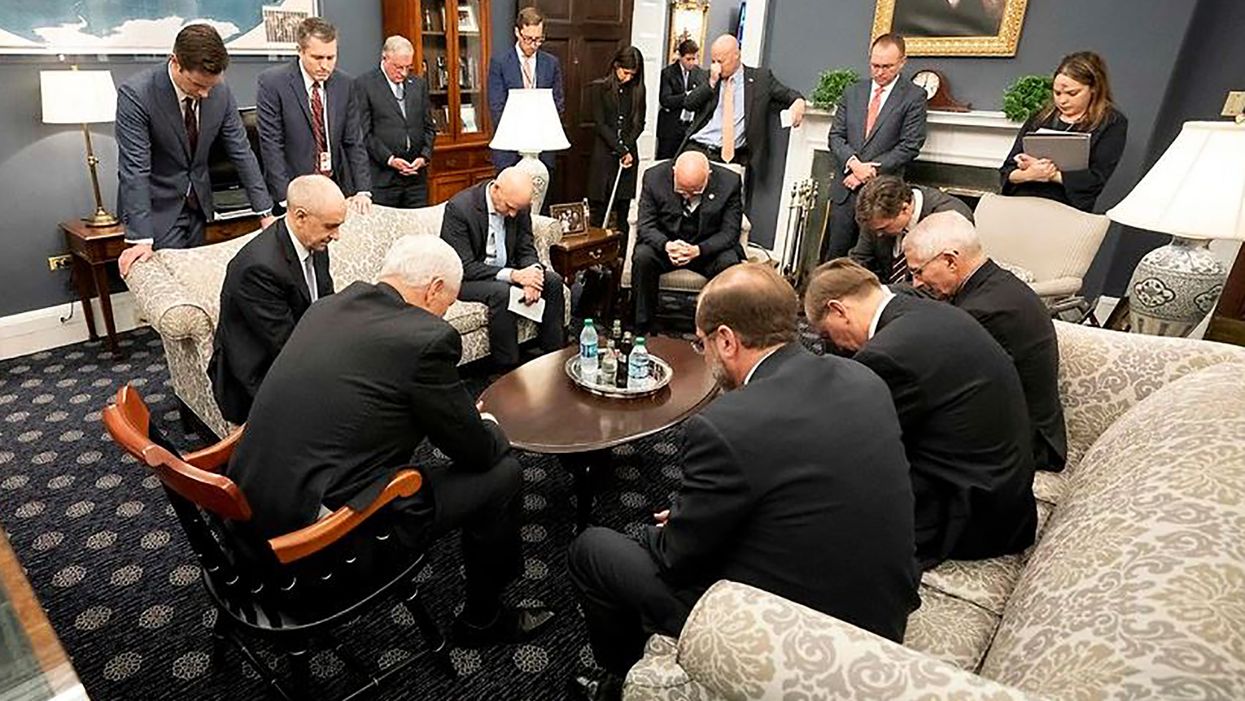 In addition to symbols of white supremacy, many of the rioters at the Capitol on Jan. 6 carried signs bearing religious messages, such as “Jesus Saves" and “In God We Trust" while others chanted “Jesus is my savior and Trump is my president." In a video interview, one of those who breached the Senate floor describes holding a prayer to “consecrate it to Jesus" soon after entering.

Many white evangelical leaders have provided religious justification and undying support for Trump's presidency, including his most racially incendiary rhetoric and policies. But as a scholar of religion, I argue that a particular segment of white evangelicalism that my colleague Richard Flory and I call Independent Network Charismatic, or INC, has played a unique role in providing a spiritual justification for the movement to overturn the election which resulted in the storming of the Capitol.

INC Christianity is a group of high-profile independent leaders who are detached from any formal denomination and cooperate with one another in loose networks.

In the days and hours leading up to the storming of the U.S. Capitol on Jan. 6 the group Jericho March organized marches around the Capitol and Supreme Court building praying for God to defeat the “dark and corrupt" forces that they claimed, without evidence, had stolen the election from God's anointed president – Donald Trump.

Jericho March is a loose coalition of Christian nationalists formed after the 2020 presidential election with the goal of overturning its results. Leading up to and following the Capitol violence, their website stated: “We are proud of the American system of governance established by our Founding Fathers and we will not let globalists, socialists, and communists destroy our beautiful nation by sidestepping our laws and suppressing the will of the American people through their fraudulent and illegal activities in this election." This statement as well as others were removed some time after the Capitol riot.

Jericho March's main activity has been organizing prayer marches around Capitol buildings around the nation after the election, imitating the “battle of Jericho" in the Bible. In this biblical battle God commanded the army of his chosen people, the nation of Israel, to blow trumpets and then march around the city walls until God brought the walls down and allowed Israel to invade and conquer the city. According to the Bible, this was the first battle that the nation won in its conquest of Canaan, the “promised land" that it occupied afterward.

Michael Flynn among other speakers at a Jericho March rally.

They also held prayer marches and vigils around the Supreme Court and Capitol surrounding the Jan. 6 election certification. Jericho March members believe that their prayer marches will help defeat the corrupt forces they claim, without the basis of any evidence, “stole" the election and that God will install Trump in his rightful place as president on Jan. 20.

Their strategy is peaceful prayer marches, however. After the Capitol violence they released this statement: “Jericho March denounces any and all acts of violence and destruction, including any that took place at the U.S. Capitol."

There is no evidence that anyone affiliated with the Jericho March organization took part in the Capitol breach. However, their leaders, I argue, are providing the religious motivation for the fight to overturn the election. Here's why.

A key part of the Jericho March events has been a group of INC Christians who claim to be modern-day “prophets," including Lance Wallnau, Cindy Jacobs and Jonathan Cahn.
Charismatic Christianity, similar to Pentecostal Christianity, emphasizes the “gifts of the Holy Spirit," which include healing, exorcism, speaking in spiritual languages, and prophecy – defined as hearing direct words from God that reveal his plans for the future and directions for his people to follow.

Scholars use the term Charismatic to describe Christians in mainline or independent churches that emphasize the gifts of the spirit as opposed to Pentecostal Christians, who are affiliated with official Pentecostal denominations. Independent Charismatic Christians tend to be more unorthodox in their practices, as they are less tied to formal organizations.

In our research, we found that in most Charismatic churches, those who receive visions or direct words from God that make predictions that later correspond to events or have uncanny insights into people's lives are seen to have the “gift of prophecy." Some particularly gifted “prophets" are seen as being able to predict world events and get directions from God regarding entire nations.

While most Charismatic churches do not engage in this world-event predicting type of prophecy, some independent, high-profile leaders that do have become increasingly important in INC Christianity.

Before the 2016 election a group of INC “prophets" proclaimed Trump to be God's chosen candidate, similar to King Cyrus in the Bible, whom God used to restore the nation of Israel. After their prophesies of Trump's winning the election came true, these “prophets" became enormously popular in INC Christianity.

In our book, we showed that INC Christianity is significantly changing the religious landscape in America – and the nation's politics – by providing an unorthodox theology to promote conservative Christians rising to power in all realms of society. It is the fastest-growing Christian group in America.

Between 1970 to 2010, the number of regular attenders of U.S. Protestant churches as a whole shrank by an average of .05% per year. At the same time, independent Charismatic churches, a category in which INC groups reside, grew in attendance by an average of 3.24% per year. According to the World Christian Database there are over 36 million people attending U.S. independent Charismatic churches – that is, those not affiliated with denominations.

INC beliefs are different from those of most traditional Christian groups, including those affiliated with official Pentecostal denominations. INC promotes a form of Christian nationalism the primary goal of which is not to build congregations or to convert individuals, but to bring heaven or God's intended perfect society to Earth by placing “kingdom-minded people" in powerful positions at the top of all sectors of society, the so-called “seven mountains of culture" comprising government, business, family, religion, media, education and arts/entertainment.

One INC leader we interviewed in 2015 explained, “If Christians permeate each mountain and rise to the top of all seven mountains … society would have biblical morality, people would live in harmony, there would be peace and not war, there would be no poverty." They see Trump as fulfilling God's plan to place “kingdom-minded" leaders in top government positions, including Cabinet members and Supreme Court appointments.

Many of those referred to as prophets in INC Christianity predicted another Trump victory in 2020. After his Nov. 3 loss, many we have studied have not recanted their prophecies, and have adopted Trump's conspiratorial rhetoric that the election was fraudulent. Many believe that the demonic forces that have stolen the election can still be defeated through prayer.

For INC Christianity's “prophets," Trump is God's chosen candidate to advance the kingdom of God in America, so any other candidate, no matter what the vote totals show, is illegitimate.