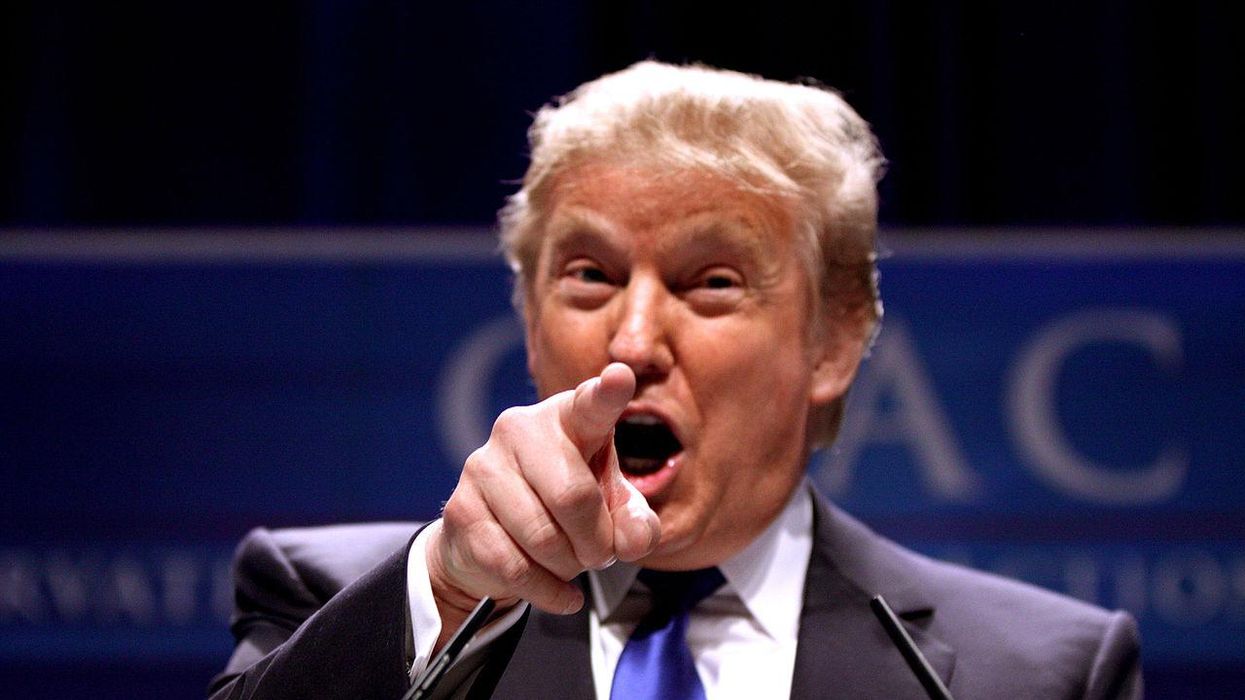 During an hour-long phone conversation on Saturday, January 2, President Donald Trump unsuccessfully tried to bully and coerce Georgia Secretary of State Brad Raffensperger into overturning the 2020 presidential election results in the Peach State. But Raffensperger, a conservative Republican, wouldn't budge — maintaining that President-elect Joe Biden won Georgia's electoral votes fairly and that the debunked voter fraud conspiracy theories Trump was promoting had no basis in reality. NBC News reporters Ben Collins, Brandy Zadrozny and Jane C. Timm pinpoint the far-right sources of those theories in an article published on January 4, and they include QAnon and the extremist 4Chan forum.

"While Trump has embraced conspiracy theories for much of his tenure as president," the NBC News reporters explains, "Saturday's call offered a look at just how much he is now relying on some of the most outlandish theories from obscure corners of the internet to make his case for election fraud."

4chan is a favorite source among fans of far-right conspiracy theorists like radio host Alex Jones. And QAnon, a bizarre conspiracy cult, believes that the United States' federal government has been infiltrated by an international cabal of Satanists, cannibals, pedophiles and child sex traffickers and that Trump was put in the White House to fight the cabal.

Joan Donovan, research director of the Shorenstein Center on Media, Politics and Public Policy at the Harvard Kennedy School, told NBC News, "Trump manages to distill down to a 10-minute monologue what would take the average person years to pull together…. Everything from fakes, forgeries and machine hacking to collusion across parties — it's all laid out in detail with rapid fluidity."

Trump, according to Donovan, "pulled together all the major talking points" of "right-wing media like Parler and Newsmax" during his January 2 conversation with Raffensperger. Collins, Zadrozny and Timm note that although Trump's "claims were wide-ranging" during that conversation, he "focused in particular on a conspiracy theory that alleges that Georgia election worker Ruby Freeman, working in the State Farm Arena in Downtown Atlanta, produced thousands of fake ballots from a suitcase that somehow swung the vote to President-elect Joe Biden. The theory was debunked weeks ago by state election officials, who called the baseless claims 'ridiculous.'"

QAnon extremists, the NBC News reporters point out, have "harassed Freeman and her daughter."

"Last month, a false rumor was pushed by QAnon accounts that Freeman had been arrested," Collins, Zadrozny and Timm recall. "Though nothing of the kind happened, the rumor spread quickly through far-right fringe communities, and Trump brought it up in the call with Raffensperger."

The reporters add that during his conversation with Raffensperger, Trump also "falsely claimed that Fulton County, (Georgia) had destroyed ballots and inaccurately characterized a consent decree between the state and national Democrats that standardized the process of verifying a voter's identity through signature matching…. There's no evidence of ballots being shredded or burned in Fulton County."

"Trump also falsely claimed that Georgia officials had signed a 'totally unconstitutional agreement' with Democrat Stacey Abrams that barred election officials from checking signature matches and allowed people who aren't election officials to collect ballots," the NBC News reporters observe. "This is inaccurate on all fronts: Georgia, in a settlement agreement with the state and national Democrats, agreed to standardize signature matching across the state ahead of the 2020 election. Signatures are still checked twice: first on absentee ballot applications when voters request a ballot, and then again on the envelope of received ballots."

Former Virginia Rep. Denver Riggleman, a Republican who has libertarian leanings and has been warning about QAnon's dangerous influence in the GOP, said of Trump's conversation with Raffensperger, "The ideas are all very specific to QAnon and other conspiracy theories. This sounded like an argument between a teenager caught on 8Chan and the parent who finds him in the basement. You can hear a lot of silence and sighs from the Georgia team."