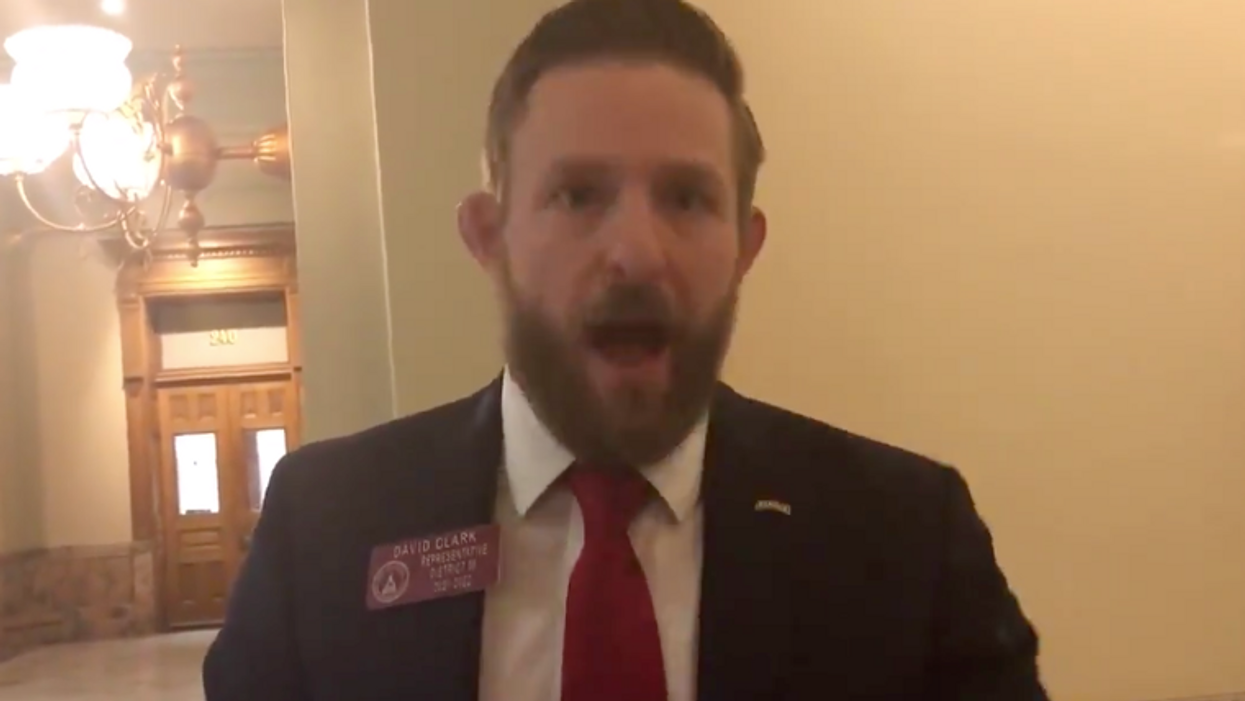 As of the publishing of this story, Georgia has 722,062 confirmed cases of COVID-19. Georgia is passing 12,000 confirmed deaths due to COVID-19, with more than 48,498 Georgians being admitted to the hospital because of the virus. Over 8,000 people have ended up in intensive care units across the Peach State. Like most places throughout the United States, the pandemic is very much not under control. Like many places in the country, the reason for this is bad leadership combined with a federal government response that was terrible from the start. Republican operators promoting bad science and attacking public health and safety measures has also eroded the efficacy of public health departments across the country's advice.

Joe Ripley of 11 Alive News reports that Republican Rep. David Clark of Buford, Georgia, was escorted out of the state Capitol chambers Tuesday morning for refusing to take a COVID-19 test. This is a part of a set of protocols established by house leadership along with advice from the health department. Ripley, in video after being escorted out, said Clark hadn't wanted to make a big deal about everything, and then proceeded to make a big deal about everything: "I even told leadership over two weeks ago, and last night, let's not make it a big deal, can we talk about this, I'm not trying to make it an issue, I'm not trying to make it political." What exactly Clark expected his fellow human beings to do, stuck in a small space with an asshole that frequently doesn't wear a mask and refuses to take a COVID-19 test, is not clear. Republicans with piss-poor health habits have put various lawmakers health in jeopardy time and time again due to similar selfish stances.

Well, radio news anchor Rahul Bali reports that Clark just lost his office space across the street from the state Capitol. This of course, is a temporary measure, and will be remedied if Clark wants to be a big boy and "participate in safety protocols and not put other members and staff in harm's way."

Clark told reporters that his big problem was that, "I check my temperature when I come in, I go in the chambers, I wear my mask, I follow the protocols that they want in the chamber. But two tests a week is wrong, on my conscious, when teachers can't get it and first responders can't get it. We get two tests when nobody else gets the same thing out there. My grandma doesn't get two tests." The idea that Clark's test was taking away from his grandma is idiotic. If his grandma is practicing proper social distancing and public safety protections she will hopefully never need to get a COVID-19 test.

Clark seems to have been protesting a memo sent by Speaker Ralston that outlined the new health and safety protocols for the 2021 legislative session. Sidenote: there's a global pandemic going on.

During the 2021 Session, Georgia Tech will be operating a testing site for General Assembly Members and Capitol Staff. The test that Georgia Tech will be using is a saliva-based PCR test (no nasal swab required) and is intended for asymptomatic individuals only. (In the event that a Member or House staff is symptomatic, they should not report to the Capitol to be tested, but rather should seek out a test off-site. If a Member or House staff has difficulty finding a testing site with availability, they should contact the Office of the Speaker for assistance.) [...]
All Members and House staff will be required to be tested twice weekly during the 2021 Session. House staff must begin testing the week prior to session. All Members shall be tested prior the beginning of the 2021 Session at the testing location of their choosing. In the event that a Member wishes to be tested at the Capitol prior to Session beginning, they should make plans to be at the Capitol between 7:00 AM and 11:00 AM on either Tuesday, January 5, or Thursday, January 7.

Speaker Ralston released a statement saying that "the member in question had been advised numerous times about the requirements and had refused to be tested at any point during this session." It's not about Clark's feelings it's "about preventing the spread of a disease that has killed more than 12,000 Georgians."

Gov. Brian Kemp was asked during a press conference today about Clark's removal from the state House, and tried to walk a circular tightrope of logic in the hopes of not offending the indefensible position of Clark. "I don't really know a whole lot about that but I know that Speaker Ralston and the House leadership has worked with their members and worked with Dr. Tumi's team to set up protocols to be able to keep this building safe during this session." He went on to say that his office also had a testing protocol and everyone should follow the "best practices," and test protocols set up. This is rich coming from a governor who has very directly helped exacerbate the pandemic in his state, for similar choices of political whimsy over good policy.

Gov. Kemp and his new tune.