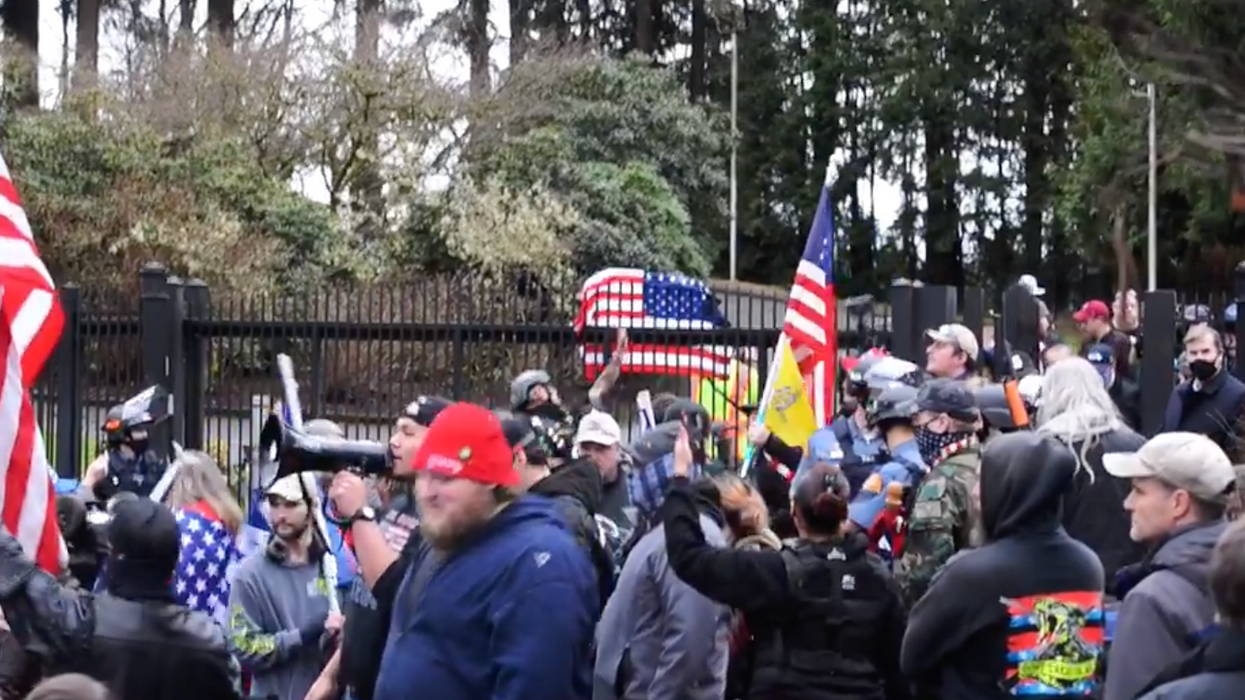 Image via The Olympian / Screengrab.
Jon Skolnik
and
Salon
January 10, 2021

While a violent horde of Trump supporters waged an insurrection on Capitol Hill on Wednesday, pro-Trump protesters also stomped on state grounds across the country to protest President-elect Joe Biden's victory –– a fate officially sealed by the Electoral College later that day. Thousands took to their city and state government buildings in solidarity with the attempted uprising on Capitol Hill, displaying their outrage beyond just D.C.

In California, hundreds assembled in front of the Capitol in Sacramento, waiving Trump flags and clashing with counter-protestors. According to the Sacramento Police, eleven people were arrested, with one report of an assault. A "large police presence will remain in the area throughout the night," the Sacramento Police Department wrote on Twitter. Protesters also gathered at the Los Angeles City Hall, according to the LAPD. Six people were arrested for unlawful demonstration, and three people were apprehended for possessing unpermitted items.

A group of protestors gained access to grounds of the Washington Governor Jay Inslee's Mansion in Olympia, breaking through the Governor's security gates, but were deterred from making entry into the building. "They did not make access to the entrance itself, just to the grounds," said State Patrol spokesman Darren Wright. Just outside the building, far-right group Patriot Prayer's leader, Joey Gibson, put on a fervid speech parroting Trump's election conspiracy and decrying pandemic restrictions.

More demonstrations surfaced in the Pacific Northwest with altercations erupting in Salem, Oregon just outside the Capitol building, where protestors burned an effigy of Governor Kate Brown. Oregon Republican Rep. Mike Nearman was caught on video opening a door to protestors who rushed in and some then sprayed six law enforcement officers with a chemical substance and violently attacked journalists. When counter-demonstrators arrived on the scene hours later, physical violence broke out between the two groups, after which the Oregon State police declared the demonstration an unlawful assembly and dispersed the crowd. Two arrests were made for harassment and trespassing with a gun.

In Georgia –– where Republican State Secretary Brad Raffensberger recently released a damning phone call recording of Trump asking elections officials to "find" more votes in his favor –– a group of protestors convened outside the State Capitol. Several attendees were members of a Georgian militia armed with assault-style weapons –– including on former leader of the KKK. Deputy Secretary of State Jordan Fuchs told The New York Post, "We heard reports of threats and left immediately." Secretary Raffensberger, along with his staff, were forced to evacuate from the building.

A New Mexico statehouse containing the Governor's office in Santa Fe was also evacuated in response to swarms of Trump supporters who descended upon the building. Hundreds of flag-waving Trumpsters arrived in a vehicle caravan, honking their horns and yelling over a megaphone about Trump's "rightful" victory, despite Biden's 11% winning margin in New Mexico.

In Lansing, Michigan, about 800 protestors came together outside the State Capitol, clinging to the hope that Trump will be vindicated. Attendees held flags that read "Stop the steal" and "Fake virus," while organizers blasted a video feed of Trump's speech Wednesday in the Ellipse. The demonstration proved more innocuous than last year's back in March when an armed state militia attempted to make their way inside the Capitol in protest of Michigan Governor Gretchen Whitmer's stay-at-home order.