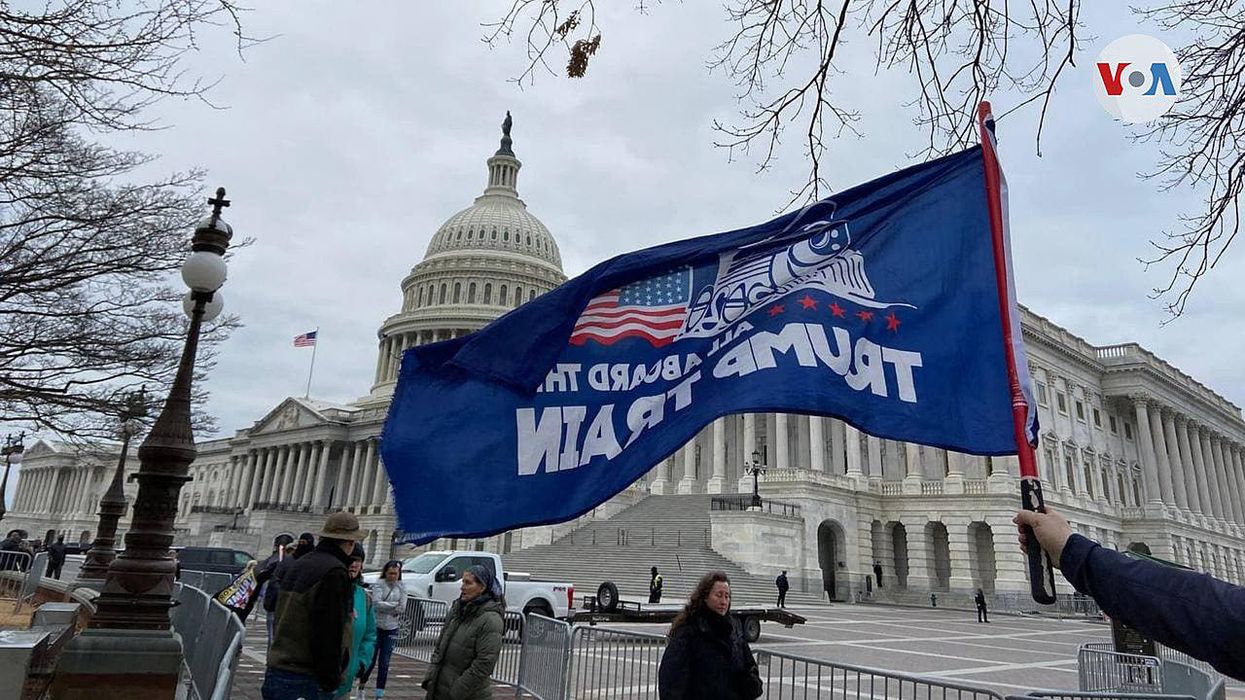 A pro-Trump flag waving in front of the U.S. Capitol Building on January 6, 2021, Voice of America
Alex Henderson
January 08, 2021

Had the horrifying events that occurred in Washington, D.C. on January 6, 2021 occurred in Guatemala, Bolivia or the Philippines, the mainstream media would have covered them as an attempted coup d'état or golpe de estado in a banana republic. But because they occurred in the United States, the mainstream media used much more measured language in their reporting — which doesn't make the events any less horrifying. And Washington Post opinion writer Karen Attiah, in an epic column published the following day, brilliantly lays out the ways in which January 6's events would have been covered by "western media" had they occurred in another country.

Attiah writes her column from the perspective of an Associated Press or Wall Street Journal reporter covering an attempted coup in a developing country — only the references are U.S. references and events that really did occur in Washington, D.C. on January 6.

"Political violence and rioting exploded in the United States on Wednesday as extremists loyal to right-wing leader Donald Trump stormed the legislative building in the nation's capital, Washington, forcing lawmakers to go into hiding in secure locations," Attiah writes. "The mob was incited to act by Trump himself. During a speech before thousands of his supporters earlier in the day, the president called the outcome of the November election an 'egregious assault on our democracy' and urged people to 'walk down to the Capitol' because 'you will never take back our country with weakness.'"

Attiah continues, "Soon, a crowd was breaking into the Capitol, charging police barricades and breaking windows to try to disrupt the certification of the presidential election that resulted in a clear defeat for Trump. A woman was fatally shot by security forces inside the Capitol, and three other people died under unspecified circumstances. An IED was found at the headquarters of the ruling Republican National Committee, and the nearby headquarters of the opposition Democratic National Committee was evacuated after the discovery of a suspicious package."

The Post columnist goes on to explain that "many Americans, including prominent journalists, politicians and security officials, expressed dismay at the unfolding events, even though right-wing groups had described their plans online and some had even printed 'CIVIL WAR' t-shirts to mark the occasion."

"Of course, political and racial violence have played a part in the history of the former British colony for centuries and have particularly been inflamed in the past four years," Attiah notes. "World leaders expressed concern about the violence, but there have been no public commitments to send peacekeeping forces to Washington."

Although Attiah's language is quite forceful and blunt, nothing she says is inaccurate or exaggerated. And she certainly gets her point across.

"The coup attempt unfolded as the former British colony continues to struggle with a dysfunctional response to the deadly coronavirus pandemic — on Wednesday, the United States suffered a record of more than 3800 COVID-19 deaths," Attiah explains. "Meanwhile, the political backlash for Trump was swift: he was banned from Twitter and other social media platforms."