Coronavirus: Here's why combining the Oxford vaccine with Russia’s Sputnik V could make it more effective

When the efficacy of the Oxford/AstraZeneca vaccine was announced in late 2020, there was some confusion. The overall efficacy of the vaccine at stopping people developing symptomatic COVID-19, two weeks after the second dose, was 70%. But this wasn't the whole picture.

This figure was based on averaging the results from two groups. In one group, which was given two full doses, the vaccine was 62% effective at stopping people developing symptoms. But in the second group, a dosing error meant that volunteers received a half dose followed by a full one. This ended up being 90% protective against developing COVID-19.

This was intriguing. Why would giving people less of the vaccine lead to a more effective immune response? The answer to this may lie in the design of the vaccine, and could mean that there are ways to make this vaccine – and others that use the same design – more effective.

How the Oxford vaccine works

Vaccines work by exposing the immune system to recognisable parts – or “antigens" – of pathogens that cause disease, such as bacteria or viruses. The immune system then mounts a response. Immune cells called B cells make antibodies to destroy the pathogen. Sometimes T cells can also be called into action, which eliminate our own cells that have been infected with the pathogen. 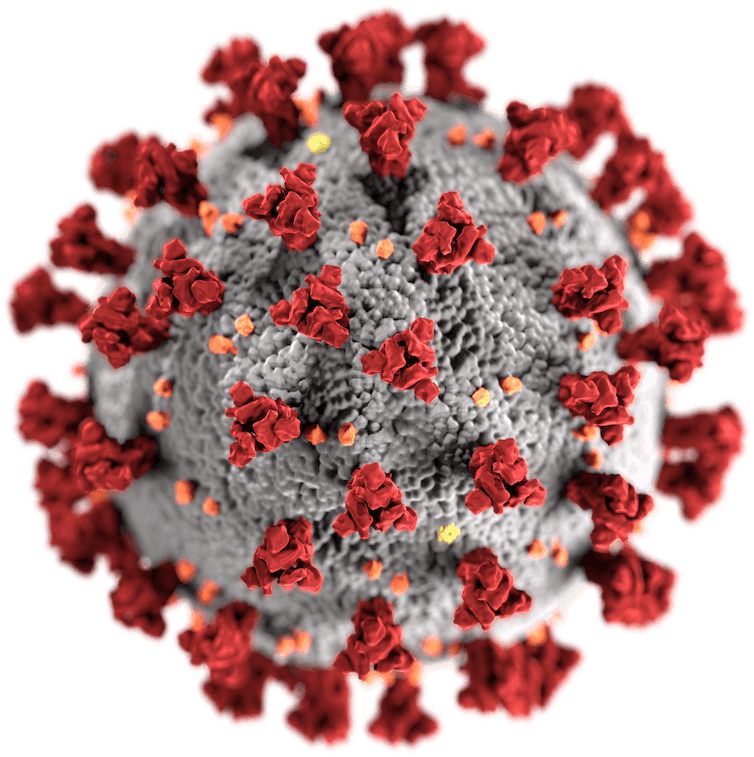 The coronavirus, with its spike proteins shown in red. Many vaccines are targeting parts of the virus specifically.

Some B and T cells then remember the antigens for the future. At some future point, if the person is exposed to the pathogen, these long-lasting memory cells can quickly order more antibodies to be made to destroy the pathogen and attack infected cells.

In effect, the principle of vaccination is to “mimic" an infection, but in a controlled way so that immunity is generated without causing illness. After a few weeks, once T cells and B cells have been generated, the person vaccinated will be protected. For certain vaccines, this requires two doses, as in some people the first dose alone won't generate complete immunity. The booster dose ensures as many people as possible acquire protection.

In the case of the coronavirus vaccines, a number of methods are used to present the virus's antigens to the immune system. Some, such as the Sinopharm and Sinovac vaccines in China, simply present the body with a whole, inactivated version of the coronavirus. But others instead instruct the vaccinated person's own cells to produce a specific part of the coronavirus: the spike protein on its outer surface, which is a particularly recognisable antigen.

These vaccines do this by delivering the part of the coronavirus's genetic code that encodes the spike protein into the cells of the body, which then read the code and start making the protein. Some, such as the Pfizer/BioNTech and Moderna vaccines, deliver the code in the form of messenger RNA (mRNA). Others use a harmless virus to get the genetic code inside cells; the Oxford vaccine uses chimpanzee adenovirus, genetically altered so that it's unable to reproduce, called ChAdOx1. These are known as viral-vector vaccines.

How design could affect efficacy

It's not yet known why the reduced-dose regimen of the Oxford vaccine showed better efficacy in trials, but it could be down to the viral vector.

However, a lower first dose might not allow for a strong anti-vector immune response to develop, which could leave the booster dose unscathed and lead to greater overall efficacy. If it turns out that this is the case, then future work will need to establish the optimum dosing regimen for generating the strongest immune response.

The Russian Sputnik V vaccine acknowledges that immunity to the viral vector could be a problem, but comes up with a different solution. It uses two different human adenoviruses – Ad26 and Ad5 (out of the 50 that affect humans) – for its two vaccine doses. This heterologous (or hybrid) vaccine, with different vectors for prime and booster vaccinations, is less likely to have one jab generate an immune response against the viral vector that then interferes with the other. The vaccine is therefore less likely to have a reduced efficacy.

The Gamaleya Center, the lab that made Sputnik V, said that after two doses the efficacy of the vaccine is over 90% (though it has yet to publish full results demonstrating this). This has now led to AstraZeneca testing a new hybrid vaccine schedule, comprising one dose of its vaccine and one of the Ad26-vector Sputnik V, to see if this makes the Oxford/AstraZeneca vaccine more effective.